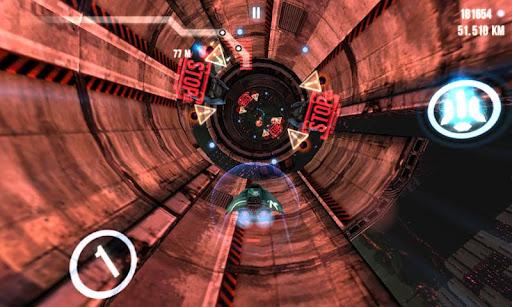 One part Wipeout plus one part Burnout brings us Busted!

At this point we’re well into the 21st century, and if I learned anything from watching cartoons in the 80’s, it’s that by now we should have flying cars. That was supposed to be the big benchmark concerning our scientific advances, and unless someone isn’t telling me something, they’re nowhere in sight.

Now, I’m not exactly holding my breath either. I’ve played a few games set in this magical future where hyperfast floating vehicles race each other. It looks like it’s the most dangerous thing in the world, and considering how many people can fatally mess up piloting automobiles, I’m in no rush for the “Flying Car Future” to get here. Mentalwarp Games’ new release, Busted!, encourages you to drive your ship to the brink without getting caught, only supporting my greatest fears.

In the futuristic world of Busted! There are tube-like highways twisting and their way around cities. It’s your job to see how far you can get, collecting the credit dots while avoiding the cops and explosive obstacles along the way.

Tilt controls spin your ship around the tube while pressing anywhere on the screen increases your speed to outrun the police. As you collect credits you can equip your ship with two stages of shields, magnets, and boosters before the race. Regional leaderboards keep track of who goes the farthest, tapping into Open Feint to populate your friends list.

Busted!‘s biggest strength is the gorgeous, fully-realized futuristic style brought to everything. The graphics, menus, sound and voice all bring a serious cohesion that a lot of mobile games lack. You can tell that Mentalwarp places a great amount of value in these pieces of the game.

Its biggest strength also leads directly to its biggest weakness: the game has a tendency to run fairly choppy, even on my Galaxy Nexus. Busted! is a game that relies on the player finding harmony in the ebb and flow of the tracks, and when the framerate falters or just straight-up pauses you’re immediately jolted out of the experience. Hopefully some performance patches can be sent out to fix these problems.

When Busted! is running well it features quite possibly the best implementation of tilt controls I’ve yet to see in a mobile game. They’re incredibly responsive to the slightest adjustment, yet not jerky or overly sensitive. It’s rather impressive and something that a lot of other mobile developers should take a look at.

While on a run you’ll have some visual cues as to distance markers, high scores, and “ranks”. For the life of me I could not figure out what it meant when I “completed Rank 2”, even after scouring the developer’s web site. There’s no persistent leveling or unlocks, so this metric was a bit puzzling. 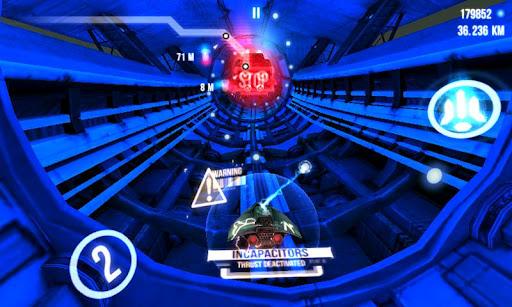 Busted! works really well as a pick up and play game. Run attempts don’t usually take more than a couple minutes or so even when you’re on a tear. Loading times are almost non-existent after the initial launch.

It’s a real shame that the performance issues I experienced are holding the game back, but hopefully they can collect enough user data to iron them out. If they do, Busted! will be a great title that shows off what mobile games are capable of in terms of style and perfected controls.