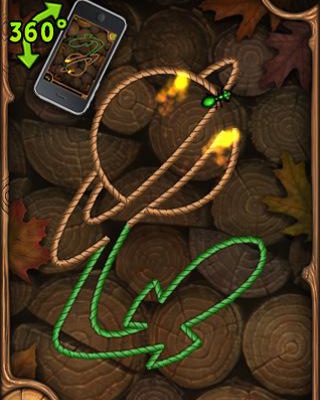 We’ve already spent plenty of time cutting the rope, and now it’s time to burn it. And some bugs, too. Burn The Rope is the latest iOS game to take a simple and fun concept and stretch it to make a largely enjoyable and challenging puzzle experience. It’s very much in the same vein as Angry Birds and Cut The Rope, and, like those games, it’s easy to pick up but hard to put down.

The premise is simple: you’re presented with a rope and the goal is to burn as much of it as possible. To do this you’ll tap the rope anywhere you choose to set it aflame, and then move your phone around to keep the flame burning. The trick is that the fire always needs to be burning up, so you’ll need to constantly shift your iDevice around to keep it going. If it’s not facing upwards it fizzles out. You’re given increasingly complex rope designs — which often are made to look like cute images like an ice cream cone or a horse’s head — and when your flame hits an intersection it’ll start burning in each direction. 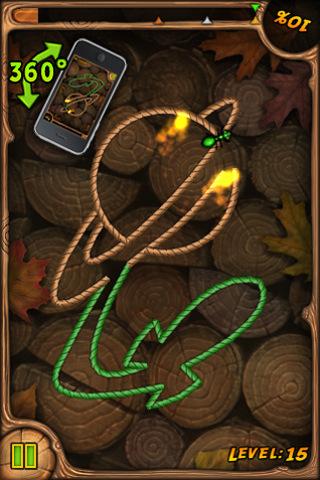 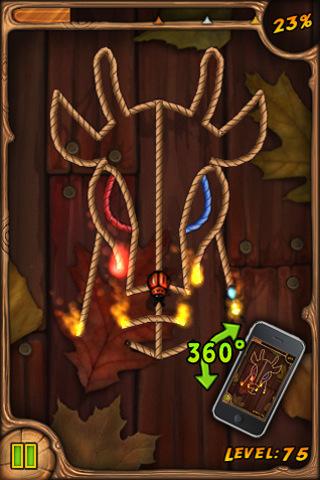 But you’ll also need to burn poor little defenseless bugs as well. And each one has a different characteristic. Scorching ants will cause the color of the flame to match that of the burned ant, while toasting spiders will create a silk bridge between pieces of rope. You’ll have to deal with different colored ropes that can only be burned away with a like colored flame and colored beetles that likewise can only be burned with the appropriate color. Beating each stage usually isn’t too difficult, as you only need to clear away 60 percent of the rope to get a bronze medal and move on. What’s really difficult, though, is getting that full 100 percent for a gold medal. Getting a perfect score requires careful thinking and quick movement, and for most of use, multiple attempts.

Burn The Rope is controlled almost entirely by using tilt controls. The touch screen is used for navigating menus and starting your fire, and after that it’s all about tilting. You’ll have to twist and turn your device to ensure that the flame keeps burning, and this works very well for the most part. The only problem is when it comes to navigating corners. Because of the way the flame glows it can be hard to tell whether or not it has fully turned a corner, which can cause you to turn too soon, making the flame fizzle out. It takes a while to get used to figuring out just how long you need to wait before you can turn.

Like the rest of the recent wave of 99 cent App Store blockbusters, Burn The Rope is incredibly charming. It stars a cute, dancing little flame and tiny little chirping insects. You almost feel bad when it comes time to burn them alive, especially since they seem to remain so cheerful even when they die. The hip-hop infused main musical theme can become quiet annoying, however, and almost requires that you listen to your own tunes while playing.

Aside from some slight control issues and an annoying theme song, Burn The Rope has just about everything you could ask for when it comes to pick-up-and-play puzzle games. It’s cute, simple to play, and full of plenty of challenging stages. And it’s the only way to burn ants without looking like you’re crazy.