Home / Reviews / Burn It All Review

Burn It All Review 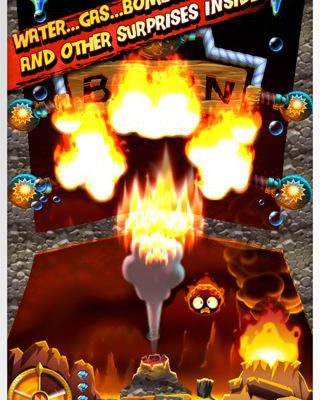 The name says it all. In Burn It All, you literally have to burn everything onscreen before the timer runs out. There’s a story about little flames supposedly escaping a volcano, but after the first level you’ll forget that there’s a story and just get lost in the burning. That means anything that isn’t a rock – ropes, enemies, wood – has to go up in flames in order to win.

You drag flames from the lower right corner of the screen to ignite the objects one at a time. However, the longer or larger an object is, the longer it will take for the fire to eat away at it. Ropes are the primary burn victims here, but even then there’s some variation. Some types burn faster than others, while clever level designs have ropes blocking your flame’s path, so the ropes closer to you have to go first before you can gain access to the rest of the puzzle. Knots in ropes send the flames in multiple directions, while gas vents can cause your flames to explode. Other hazards, like water, can extinguish your flame and slow you down.

There are also enemies that fly in erratic patterns, interfering with your flame’s path. While they do have to go in the end, the long rope they might be blocking would need to go first in order to complete the level before the timer runs out. Large wooden objects also take longer, but these can be ignited anywhere as opposed to the tips of ropes. Other flame types, such as a blue flame that allows you to begin ignition at any point on a rope, but regenerates slower, add to the strategy of the gameplay.

There are four worlds, each featuring 25 levels per world for a total of 100 levels. It’s a lot of pyro for your dollar. While you do have to complete a world entirely before unlocking the next one, Burn It All allows you to skip ahead to other levels in the same world should you ever get stuck. It’s one of the most annoying things in most games, to be stuck on a single level with no way to proceed, so good on Burn It All for giving players some flexibility. 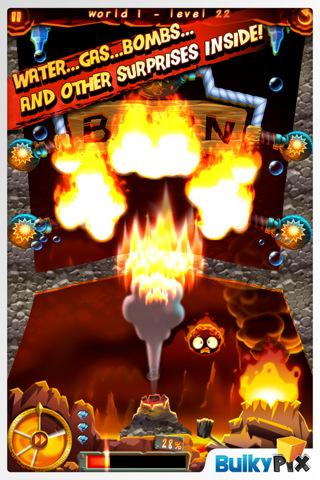 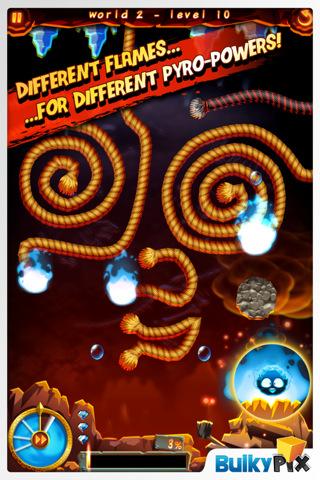 The main problem with Burn It All ends up being its repetitive gameplay. While having 100 levels is certainly nothing to sneeze at, the fact that you’re presented with virtually the same problems and pitfalls all the way through (i.e. burn things in the right order, don’t get extinguished) gets a little stale after a while. It’s not mind-numbing, and you’ll genuinely enjoy the game, but not quite enough for huge stretches.

Part of why Burn It All isn’t as great fun as it could be stems from the fact that it has little-to-no personality. Let’s face it: part of why we love Angry Birds, Burn the Rope and Cut the Rope is because those games give you something endearing or amusing to add to their repetitive natures. It’s always worth trying another level again just to make sure cute lil’ Om Nom doesn’t frown again, or so the pigs don’t laugh at you. In Burn It All, you have the incredible motivation of… the timer running out. It seems like a trite thing to complain about, but a littler personality goes a long way.

Burn It All is a great example of a simple idea making a really good game. If it had a little bit of sparkle to it, Burn It All would really be something. Those sparks are sure flying gameplay-wise, but the heat isn’t turned up to the level it could be. Still, it’s very much worth the download.