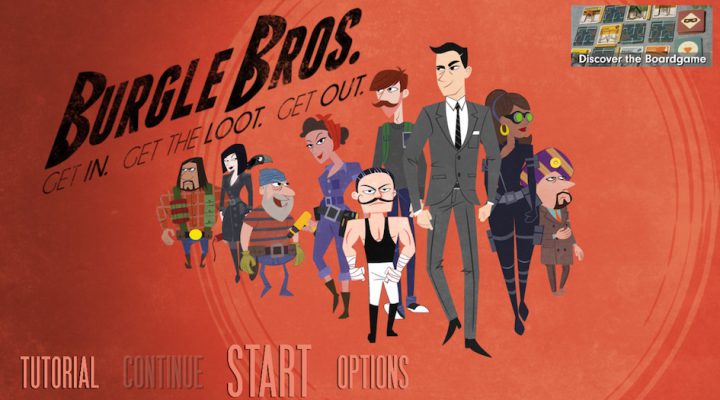 Some interface design decisions are a bit awkward

Video games can get away with aping actions like shooting, jumping, etc in a manner that more directly translates to the real world, but board games have to abstract things much, much more. At least they do if they want to avoid alienating players with overly complex systems. The reason I’m waxing all poetic like about this is because Burgle Bros does a very good job of taking a complicated subject – in this case a multi-person heist – and distilling it down to something that manages to be fairly simple to play while still being evocative of its intended subject matter. This can be an extremely difficult balancing act and hats off to Tim Fowers for meeting that challenge head on. 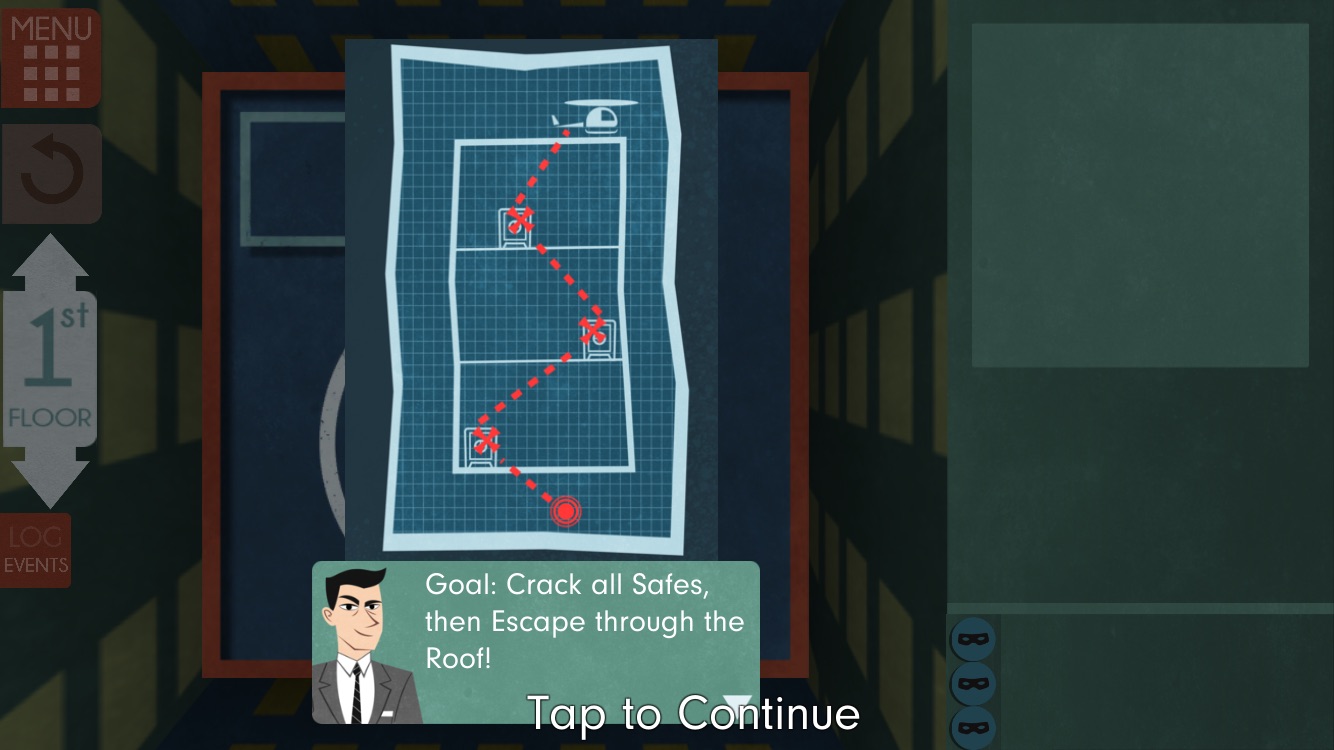 The ultimate goal of Burgle Bros is to find the safe that’s hidden on each floor, crack it, and make it to the roof with all the stolen goods before the team is discovered. Each game is a heist of some sort, with several different locations to choose from and settings to toggle in order to make things more difficult. There are also nine different characters to pick from (each of them also has an improved version to unlock) when figuring out who to use on your four person team. Between the differing layouts of each building, the random room placement, and variety of crew skills there’s quite a bit of replayability here.

Replayability isn’t the only good thing about Burgle Bros, of course. Various gameplay systems like hidden rooms that you can either wander into blindly or spend an action to “peek” at, wandering guards, alarm systems that can alert guards or be bypassed if you hack the correct computer, and so on do a fantastic job of selling the whole heist thing. It’s also tough as nails, which I guess is thematic? 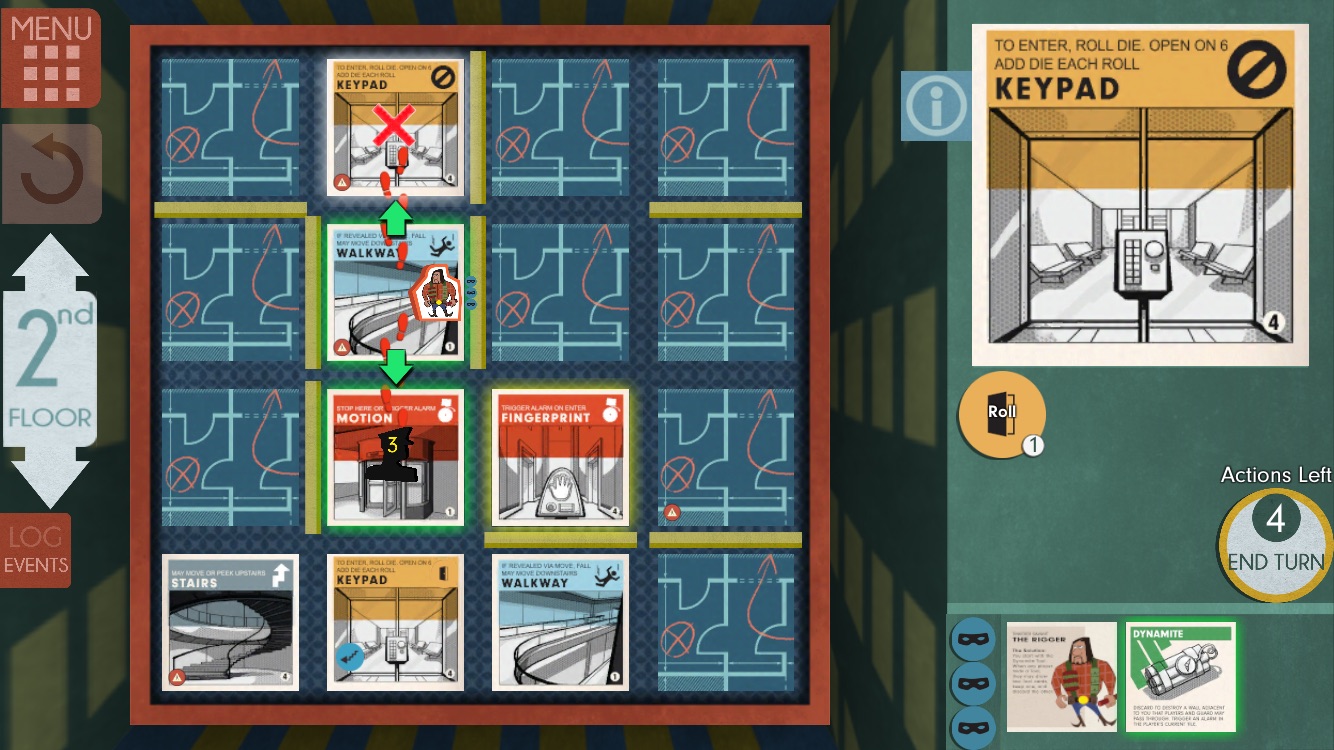 So, game mechanics wise, it’s quite well done and thematic. The interface is a bit hit-or-miss, though. It gets the job done, and some stuff like being able to easily see which character’s turn it is or to switch between floors is really nice, but some of the other elements are a bit off. In some cases it’s a lack of polish, such as the highlighted tile on the game board and the zoomed in detail tile on the far right side of the screen not always matching up at the start of a turn or the supremely awkward way you swap items between team members. It doesn’t ruin the game, but it does become a nuisance from time to time.

The text is a bigger problem, to be honest. Well, bigger in the sense that it’s more significant, but the actual problem is that it’s too small. It may not be so bad when playing on a tablet but playing on a phone makes reading certain things way too taxing. I thought it was kind of small on the team select screen – hooboy was I wrong. Trying to read item descriptions or look at character abilities while in-game is even worse. Like the interface issues it’s not bad enough to ruin anything (it’s not Ember levels of microscopic, thankfully), but it’s still an annoying hurdle to deal with that really shouldn’t be there in the first place. 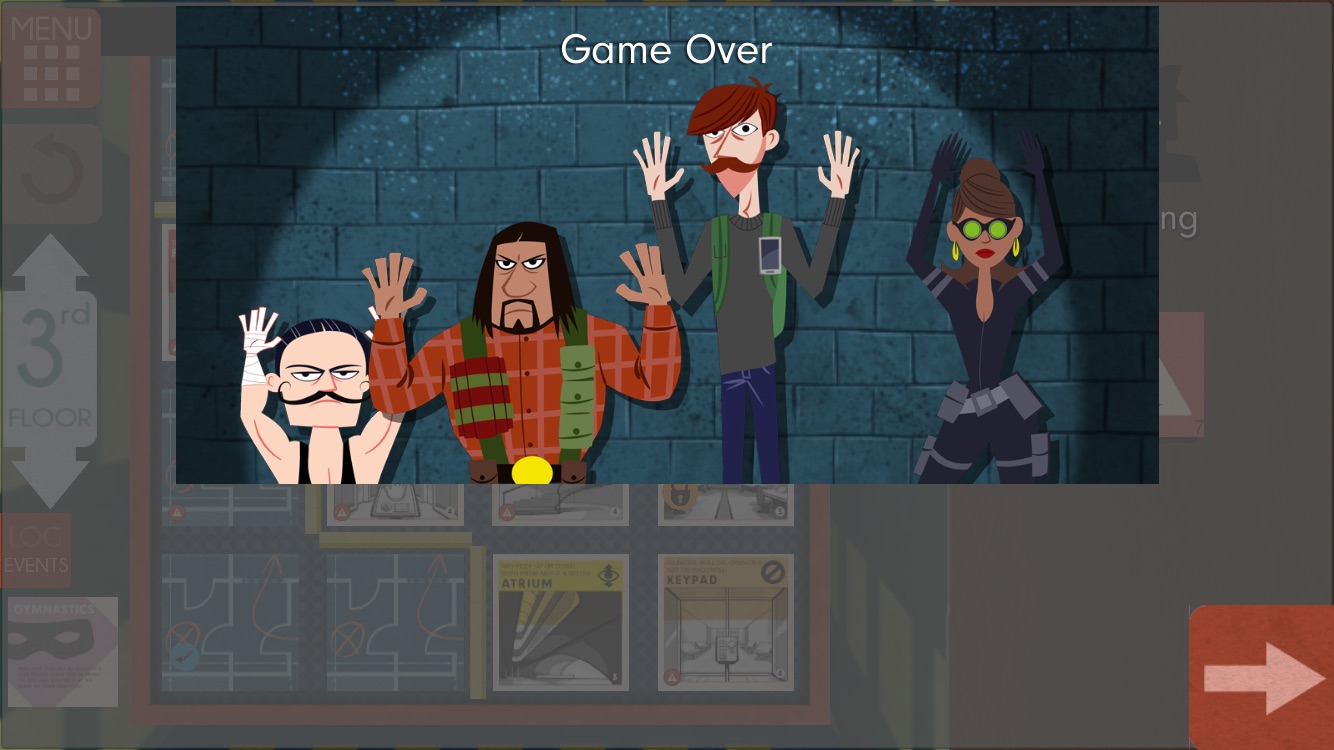 I’m glad my problems with Burgle Bros aren’t serious, because I really wanted it to be a fun but not overly-complicated board game heist and that’s exactly what it ended up being. If you’re into tactical board games and have a thing for heist movies, you might want to check it out.