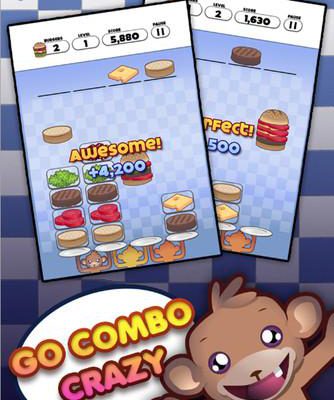 When you read the description of Burger Joint in the App Store they claim their game is the result if you “smashed Tetris and Bejeweled together,” but that’s a lie. In fact, Burger Joint is a direct imitation of the old NES and Gameboy title Yoshi, but without most of the fun and whimsy. This is a game which could have picked up the puzzle game mantle and done neat things with it, but instead opted to take the lazy way out and thus suffers for it.

The heart of Burger Joint‘s gameplay is stacking ingredients such as beef patties, cheese, lettuce, etc. between two buns in order to make sandwiches and score points. The catch is that there are going to be a lot of times when ingredients you don’t need drop, cluttering up the screen and threatening to end the game. Thus, stacking two of the same ingredient on top of one another makes them vanish, clearing a bit of space and providing some breathing room. It’s a risk/reward scenario though, as the bigger the sandwich you make the more points you earn, so it becomes a balancing act to build up your towers of ingredients without running out of space. Remember how I said it’s just like Yoshi? Yeah, just substitute patties and pickles for Goombas and Boos and you have the exact same game. 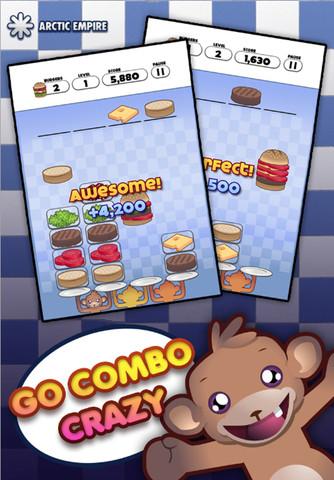 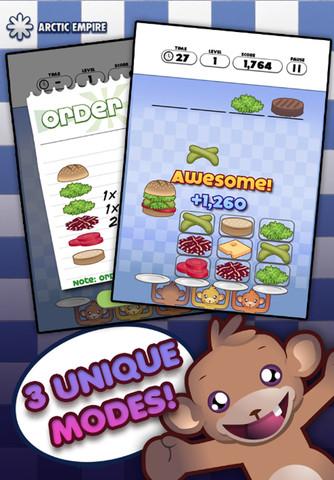 In addition to the standard Eternal mode there is also a Cleanup mode (or as I like to call it, Yoshi B-Type), where instead of stacking ingredients you’re attempting to clear the screen. This is where the game feels a bit more like Tetris, but not really, since there’s no incentive to build up your ingredient tower before knocking it back down.

Rounding out the gameplay is Order-Up, which is the game’s most clever addition. In this version players get one minute to make a specific sandwich, with bonus points being awarded for speed. It’s a neat idea to try and catch only certain ingredients while avoiding others, but the game’s AI is so flawed that sometimes Order-Up becomes an exercise in frustration. On more than one occasion the game never dropped a bottom bun, so I couldn’t make the required sandwich even though all the other ingredients were already littering the screen. Other times I would get said bun with one or two seconds left on the clock, which really just added insult to injury. This is the only quasi-unique bit of gameplay in Burger Joint, but it’s too broken to be any fun.

The fact that Burger Joint is such a direct copy of Yoshi wouldn’t be such a bad thing if the game were fun, but it isn’t. The game seems to be programmed to punish, and the sluggish controls cause lots of unneeded stress at higher levels. Also, the developers might want to turn off the push notification that asks you to rate the game every single time you run it; I get the feeling they’re not going to get the sort of response they’re hoping for. This is the sort of impulse download that you may enjoy for five minutes, then forget all about and eventually delete from your phone entirely.