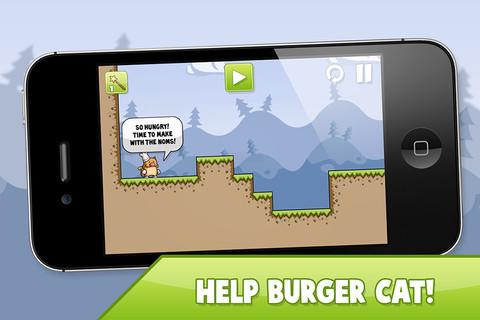 If you first encountered the internet, say, three years ago, you’d be excused for wondering about our intense fascination with cats and their special speech patterns. I’ll admit to thinking quite a few are pretty hilarious in their time, though I’d also admit that for the most part I think that ship has sailed and the Cheeseburger loving cat that had his time in the sun is about ready to move into the digital pasture so we can find something new to laugh at. So making a game about one of those cats now seems ill-timed.

In Burger Cat your goal is to guide the intrepid cat to his beloved burger. You do this by manipulating the terrain between the two: digging holes, raising the ground to let him climb, adding elements to overcome obstacles, etc. Then you’ll let him go and see if he makes it.

I think my main problem with the game is just that it has a bit of an identity crisis on its hands. Screenshots and such would lead you to believe there are some platforming elements in the game, where in reality it’s a strictly hands off affair. You make some modifications to the environment and then press “play” to watch events unfold.

These mechanics don’t seem weird in games like Incredible Machine or Casey’s Contraptions because those titles feature inanimate objects. I wouldn’t expect to have direct control over a bowling ball rolling down a gutter. Here, I really expected to be able to control the Burger Cat to guide him along (with the aid of terrain modification).

This non-control poses a few problems. One is that you’re not entirely sure how you need to build out the entire level when it gets more complicated, and it helps to kind of piece it out. For example I want to test this spring jump and make sure he clears the gap. Place the piece and go. Ok, that worked… let’s move to the next part. And there’s the problem. Going back to change something is impossible. If you restart, you reset everything. If you’re building a sort of Rube Goldberg machine to deliver the cat across the screen, starting over sucks.

The other problem is really much simpler. The cat walks way to slow. When you need to reset and do a level a few times to fix a mistake or get it right, it’s beyond aggravating to watch him saunter across the screen like he’s got all day. It’s actually just as annoying on the early levels, when you need to do one thing to have the level beat all you really want is a fast forward button to make it end sooner. Trainyard avoided both those issues and did it with class; they aren’t problems I should still be dealing with. Watching a game play itself it a bore, especially with such an easy fix.