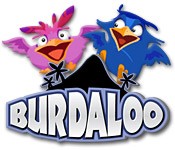 My wife hates birds. Really hates them. She’s one small step away from full-fledged ornithophobia. Hence the reason I was not allowed to play Pretty Good Games’ match-three game, Burdaloo, while she was in the same room. The constant and highly realistic sound of flapping wings and gentle cooing in the background drove her batty.

This is my way of saying that Burdaloo‘s stand-out feature is its slick production values. The terrific sound effects are just the start. The boldly colored, Flash-based graphics, which feature a nice assortment of cartoonish, animated birds, are just as impressive. And each type of avian has its own distinguishable personality, from the frowning black Hermans to the dopey purple Maxwells.

However, get past the polished audio and visual elements and you have a pretty average matching game.

Burdaloo sees players assuming the role of a bird-loving vacationer looking to spy various species of the feathery creature. We travel to ten island locations, each with eight or nine puzzles consisting of rows and columns of colorful winged animals. The object is to drag rows of birds horizontally or vertically in an attempt to maneuver three like birds into adjacency.

It sounds pretty simple, and the core idea is, but the game’s designers have added plenty of variables to make things more interesting.

As the game progresses we have to contend with larger birds that take up twice the space of standard flappers and force us to move two rows at a time. Also, stubborn black birds that refuse to let us move the rows and columns in which they are perched pop up occasionally to give us some grief. Then there are eggs, which contain extremely rare birds and will only hatch when the player clicks on them before clearing certain nearby birds.

Things become even more complex when the puzzle objectives begin to change. The goal for most puzzles is to fill up little bird silhouettes of varying colors by matching birds of similar hue. There are also plenty of puzzles in which the player’s aim is to match a succession of birds in a particular order.

However, once in a while players will need to do something quite different—and sometimes much more difficult—to solve a puzzle, such as sort a small grid of birds into a given pattern. The birds in these puzzles don’t disappear; you just have to keep shifting rows and columns until you achieve the proper configuration.

Another puzzle type ditches the pre-set grid and has players trying to clear birds as they fall into place. This one isn’t very hard to complete, but it’s nigh impossible to achieve the target score for a gold ranking—cleared puzzled are sorted by gold, silver, and green grades—without using one or more of the game’s special abilities.

On the subject of special abilities, they’re the final means by which the developers tried to shake things up. There are eight in total, and they are slowly unlocked over the course of the game. One clears all birds of a certain color, another hatches all eggs on screen, and still others clear either vertical or horizontal lines.

The abilities are well conceived and useful, but they are also prohibitively expensive. Most puzzles will see players earning just three to five burdaloon coins; a fraction of the 40 coins required to purchase the most powerful abilities. That means they should only be used under circumstances of dire emergency. Indeed, I was in such fear of wasting my hard-earned coins that I almost never used the more expensive abilities, opting instead to purchase the occasional matching hint—an ability that costs just a single coin per use.

But whining over the price of special abilities seems trivial, especially since good players probably won’t have much need of them. A more serious complaint is that the game feels too busy for its own good. The large assortment of puzzles and bird types can feel a little overwhelming, and should you miss the one-time pop-up explanations that describe new features then you’ll have to engage in extensive trial and error to discern their significance (I once scratched my head through half a dozen puzzles before understanding that the new songbirds that were occasionally flitting onto my screen were worth double the points when cleared).

What’s more, puzzles rarely last more than a few minutes. It seemed no sooner would I start a new puzzle than would I finish it. That means I never got into the sort of steady groove created by the very best puzzle games. Pretty Good Games included a secondary mode called Zen, which lets players clear birds endlessly, but without some sort of goal (other than an unlockable achievement award denoting you have played the game in Zen mode for five hours), it seems rather pointless.

These beefs aside, Burdaloo isn’t a bad game. Indeed, once you grow accustomed to and comfortable with all of the variables, it can be a fair bit of fun. It just doesn’t have that instantly accessible and addictive, gotta-keep-playing vibe found in the all-time great puzzlers. You’ll download it, play it for the roughly seven hours it takes to clear all of the levels, and then move on.

Gamezebo tip: If you like this game, check out Ikibago: The Caribbean Jewel, Pakoombo, and Yumsters! 2.

The Wonderful End of the World Review