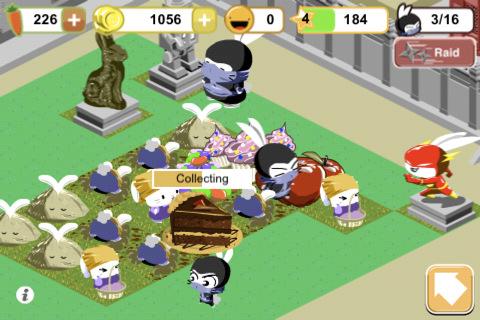 There seems to be a trend of iOS games that add cool concepts like zombies, ninjas, or pirates in an attempt to make the game seem more exciting. And, hey, why not throw in some cuddly animals, too? Who wouldn’t want to play a game called Bunny Ninjas? The answer: anyone who has spent more than a few minutes with it.

The game has you raising a team of ninja star wielding bunny rabbits so that you can send them out on raids. Sounds exciting, but in reality, not so much. Bunny Ninjas is a lot like most social games out there, except lacking much in the way of personality. You can buy new ninjas — of which there are a number of different types ranging from tough ninjas to girl ninjas — and they come delivered in a wooden crate. After a couple of hours of waiting (the wait time depends on the type of ninja you’ve ordered) the crate will start rocking and you can let the ninja out.

To earn money you’ll need to do something similar to farming, though we’re really not entirely sure what is actually going on. There are helper bunnies, each of which takes up one plot of land. You can get them to dig for food like cups of soda or jelly beans, and after a certain amount of time you can collect the food and earn some money. It’s weird and confusing. Why the bunnies dig for junk food and why you earn money by collecting that food is never made clear. You can use the money to boss more helper bunnies around, buy new ninjas, and decorate your ninja garden.

So why are you buying ninja bunnies? To fight giant porcupines, of course. Once you have enough soldiers you can go on a raid, which means a simple fight sequence against an odd looking porcupine monster. You can choose from two attacks and regularly swap out your ninjas, but there really isn’t much strategy needed. And if you lose a ninja, they’re gone for good. These battles aren’t fun and they’re over quickly. They do earn you lots of money, though. 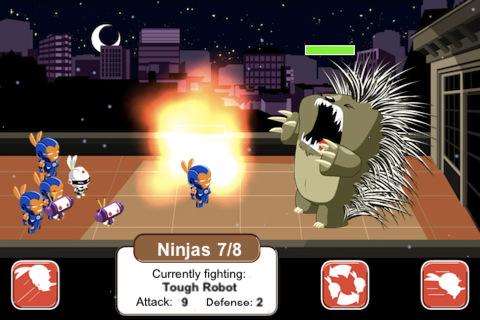 The main problem is that Bunny Ninjas doesn’t give you much of a compelling reason to play. In spite of the absurdly goofy premise, raising and battling ninjas simply isn’t fun. And since the game doesn’t look all that great, there’s very little satisfaction to be had from improving and expanding your garden.

Bunny Ninjas attempts to coast by on its name, which promises a fun and goofy game that simply does not exist. Your initial impulse may be to check out Bunny Ninjas to see just what it’s all about. But this is an impulse you should ignore.