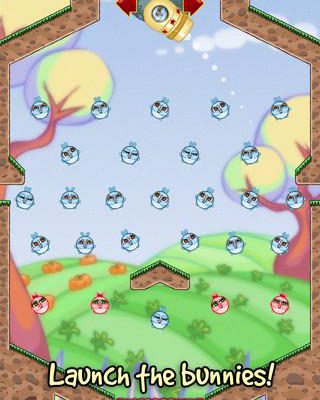 If only its gameplay was as flawless as the reproductive science it presents.

Bunny Cannon begins as one young rabbit’s attempt to reconcile three different explanations of where baby bunnies come from.  His father claims they arrive from heaven, his uncle says the stork shoots them out of a cannon, and his teacher explains they come from other bunnies.  Because of this, our furry visionary imagines a world where bunnies are catapulted from a cannon in the sky into other bunnies, which causes them to multiply on their freefall journey toward a basket below.

This is also the basic gameplay of Bunny Cannon, and what you’ll have to work with.  The goal of each level is to fill the basket(s) at the bottom of the screen with a certain number of bunnies, which varies from stage to stage.  Certain baskets will also count only specifically-colored bunnies (blue or pink), meaning any bunny of the wrong color that falls simply won’t add to the completion total.  Collecting the minimum number of required bunnies will let you pass the level, while additional catches earn you stars for the standard three-star rating system.

As a modified version of pachinko, Bunny Cannon is reminiscent of Peggle at first blush, with a few significant gameplay differences.  Having to land your bunnies in the basket at the bottom of the screen is one we’ve already mentioned.  There are also hazards all over each stage, including open sides where the bunnies can fly out, poison ivy, fluttering owls, and proximity bombs.  Bunnies also multiply upon hitting rabbits of the opposite color, creating a nearly constant potential for “multiballs.”

However, this bunny multiplier is not merely a bonus feature like Peggle‘s “multiball,” but a required mechanic for filling your baskets on the majority of stages.  The game typically gives you a couple of bunnies in both blue and pink in your cannon, while requiring at least three or more of each color in the baskets.  This means you’ll need to shoot blue bunnies into pink ones—creating two blue bunnies and one pink—and pink into blue—creating two pink bunnies and one blue—in order to meet your rabbit quota.  There will also occasionally be golden eggs in place of bunny pegs on the stage.  These eggs can be broken to reveal a golden bunny, which, if hit, will drop three golden bunnies that count for either color.  These eggs are rare, though, and often placed in very hard to reach spots.  Without any other way to receive “extra” bunnies, you’ll need to aim your shots carefully every round.

This need for precision, and the game’s overall difficulty, is its big downfall.  Although pachinko, like slots or pinball, is a very luck-based game, Bunny Cannon relies much more on skill—or seems to.  Most levels are set up to force you to lose as many bunnies as possible, with sides lined with spiked ivy next to wide open borders, resulting in bunnies flying to their death in multiple ways.  With mostly unpredictable bunny physics—when your bunnies multiply, all three will fly in completely different directions—you have little to no control over your rabbits’ ultimate route.  This is extremely frustrating on stages that are built with precise bunny-firing in mind, which is nearly all of them. 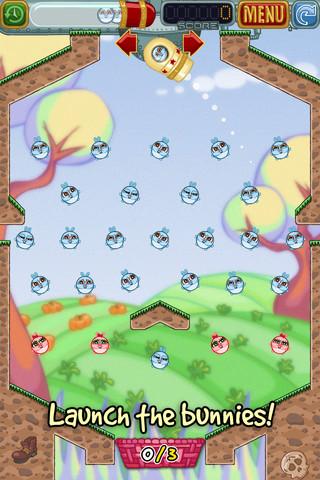 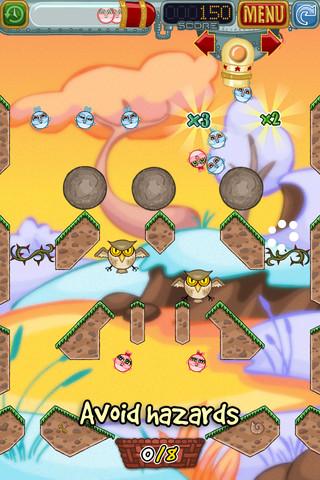 Precision is also affected by the game’s controls, which are simple yet poorly implemented.  Your cannon can be moved left or right at the top of the screen to allow shots around obstacles, by dragging it with your finger.  However, you shoot by touching anywhere on the screen and can only cancel shots by dragging back up to the cannon itself—which means any touch near the cannon itself could be (and is randomly) construed as one of these movements.  I often opted to leave my cannon in its starting position rather than failingly attempt to move it, aiming and shooting my bunnies by touching much lower on the screen.

Despite this strange attempt at precision in a mostly random game type, Bunny Cannon has potential visible in some of its stages.  Levels that focus on filling baskets with lots of bunnies around reasonable numbers of obstacles are rewarding and fun, yet still challenging.  The first half of the second field (levels 31 – 60) feature a handful of stages without open sides, which greatly reduces the frustrating randomness of losing bunnies.  Part of the fun of the game is watching your bunnies bounce off each other and go flying all over the place—why punish players for that?

Although the 90 levels currently available will take most players a decent amount of time to complete (and recomplete for higher scores), developer Not Doppler has stated even more stages are on the way.  Hopefully the new levels will focus on the best parts of Bunny Cannon: creating combos of bunny multipliers, overflowing baskets with bunnies, and watching them bounce like crazy without flying off the stage.  Leave the unnecessary difficulty for the more mature sequel, Rabbit Cannon.