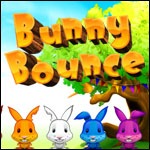 Unlike those "other" video games you buy at retail, downloadable casual games all share one unique and unmistakable quality: they’re easy to pick up but hard to put down.

Gamezebo readers know all too well the "just one more level" phenomenon – you know, when you sit down for a five-minute break but end up playing so long your dogs approaches you at the PC with his empty food bowl in his mouth.

The latest game that fits this bill is Zylom’s Bunny Bounce Deluxe, an addictive 3-in-a-row that melts time more than Salvador Dali.

The story, however, seems like more of an afterthought than anything else. It tells of a couple discussing their upcoming vacation plans. The boyfriend then sees an ad in a magazine promoting a photo contest: win a free trip by taking pictures of bunnies. Why not, he thinks, as the only thing better than a vacation is a free one. While the comic book presentation is attractive, this is the extent of the story as the rest of the game is simply the 70-odd levels of bunnies you must manipulate with your mouse.

Fortunately, the game-play makes up for this loose attempt at a story.

The player is presented with a board of colorful bunnies – say, for example, a grid of five bunnies across and five down – but the bunnies on the far left side of the screen are segregated from the rest of the pack with a vertical border. Your goal is to align three or more same-colored bunnies (horizontally or vertically, or both) on the larger right portion of the board by swapping one of the bunnies with one on the left. If successful, the bunnies disappear, which makes room for new ones to bounce up from the bottom.

To complete the level in the main Party mode, you must remove all "shiny" bunnies on the screen before the timer expires. Because you must make groups with these glistening bunnies instead of aligning any same-colored bunnies, you must study the screen and strategically choose your next step to get the colors you need.

Over time, the screens get more challenging as many more shiny bunnies must be matched; the clock gets much faster; obstacles begin to appear on the board such as patches of dirt or rocks that cannot be removed; and new bunny colors are introduced. Things get even harder about halfway through the game with bunnies locked in cages (so they won’t move) and "stubborn" bunnies that won’t let you swap them with ones from the left side of the screen.

To help you out, bonus bunnies will appear on the screen, such as a "clown" bunny that serves as a wildcard (can be used as any color) and a "party" bunny that destroys all same color bunnies from the screen if you can make a match with it. Savvy players can also make these helpful bunnies appear by performing well, such as creating a wildcard bunny by matching three bunnies vertically and horizontally in one move. More help is here if you need it as a Hint button can be clicked, which highlights what bunny you should be choosing next.

Every couple of levels or so, special bunnies will appear that you can photograph and look at in your photo album from the main menu. The only catch is that you need to include that bunny in one of your matches with bunnies of the same color. Examples of cute collectibles are a vampire rabbit, a scientist, cowboy and grim reaper. These help add some extra incentive to finish the game and play the other modes, such as Action (no separation between levels) and Relax (no timer).

One more beef aside from the cheesy story: while the graphics are downright cute and colorful, the music gets repetitive quickly so players may end up muting it altogether. Too bad there’s only one song, plus there’s no option to play your own MP3s in the game.

Bunny Bounce Deluxe, however, is one of those games that’s perfect for the entire family as kids will find the graphics and sound effects amusing (not to mention the collectible rabbits), while mom and dad will enjoy the increasingly difficult levels. While Easter may be a ways away, do yourself a favor and start hunting for bunnies today by downloading this fun and addictive puzzler.

The Odyssey: Winds of Athena Review