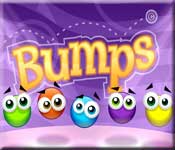 Physics-based puzzle games like Peggle have proven to be very successful, but an integral part of Peggle‘s gameplay was the random elements of chance that made each game different. Take away that element, and you end up with Bumps.

Essentially a large series of  drop puzzles, Bumps is about dropping colored balls onto a series of platforms and letting the games excellent physics engine work its magic to collect like-colored keys. (The keys unlock cages filled with captured Bumps that are being stored away to be eaten by some alien invasion, but other than the opening sequence, it’s just a foil for the gameplay.)

That isn’t to say that the game is boring. At the outset of each of the game’s 99 levels, the Bumps you need to solve the puzzle are floating in the level. Your job is to move them to their appropriate starting positions by dragging them with your mouse, then clicking the “GO!” button on the bottom, and seeing if your Bumps fall when you want them too. If you fail, the Bumps return to where you last tried them, allowing you to try a different solution. Different-colored starts are awarded for completing the stages in as few attempts as possible.

Levels often contain various obstacles such as rotating platforms, bouncy floors, chains or hanging pendulums that can alter a Bump’s trajectory. As the stages progress, new elements are added, such as power-ups that change the size of a rolling Bump, water areas which cause your Bumps to float, or other items like accelerators or items that invert gravity. Many of the levels involve creating a chain reaction with both these level elements and power-ups.

When you first start playing Bumps, the cute (but never annoying) music and graphics help pull you in. The game has lots of personality, without ever resorting to being sickly sweet or cloying. Each set of levels has a unique theme and colorful, animated background. All of it is very simple, but in a good way. In a wonderfully inclusive move, Bumps employs a color blind mode which changes the game’s graphics to assist players who have trouble distinguishing between certain colors. It’s a great idea that more games ought to include.

Unfortunately, other than an initial tutorial explaining how to grab and drop the Bumps, you’re pretty much on your own the rest of the game. Winning is either incredibly easy or tear-your-hair-out hard. For example, in one of the earlier levels, I didn’t realize that I could place a Bump in the middle of a chain to break one side of the link, which would shove a big Bump into a smaller one to get the last key. Another time, I was completely lost for a long while on level 27, but level 28 was completed on my first try.

The lack of explanation forces you to play using trial-and-error. None of the power-ups were explained, and while their icons are fairly straightforward, their implementation definitely isn’t. Sometimes the game plays out like one of those machines from the Warner Brothers cartoons of old, rolling and bouncing all over through various contraptions. And unless you got the drop placement right, you’ll be trying again and again.

But once you know the solution, there’s very little incentive to go back. After you make the discovery and earn no star, due to multiple attempts, you simply go back to the level select menu (which, mysteriously, is done by quitting to the title menus, loading up your previous game then selecting the stage), completing that puzzle on your first try and getting that gold star.

The worst part, though, is the lack of depth. With its one-drop gameplay, there’s not a lot to do here. While there are a lot of levels – and many of them are very well-designed – the odd difficulty spikes and sameness made the game lose the “just one more level” addictive nature I was craving to have.

Bumps isn’t a bad game, though, and kudos to the developers for the color blind mode, which makes the game accessible to that audience. Bumps might lack the staying power that many of the big stars have, but nevertheless there is a good formula here, and the game’s world is bright and colorful. For those who like problem-solving, certainly try to demo and give it a whirl.