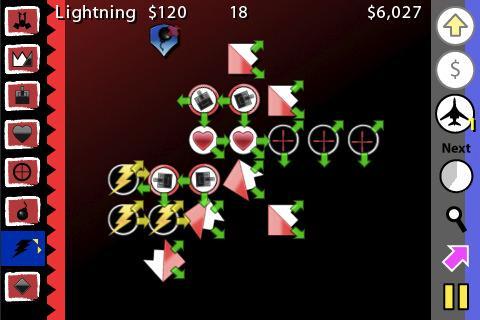 Bump Wars adds a much needed dose of strategy to the tower defense genre.

When it comes to tower defense games, strategy is often sidetracked by players who realize they can just level up a couple of units in key positions and then just skate on to victory. Bump Wars, however, is a game that wants its players to think and change tactics constantly by making sure that the playing field never stays the same from one minute to the next. It’s a unique title, blending two different types of games to create something that feels fresh while remaining familiar. For the most part, it succeeds admirably with its fast-paced gameplay and thought-provoking challenge.

The gameplay is a mix of strategy and tower defense genres. Enemy units will advance from three sides, attempting to wipe out your fence line and the soldiers that are stationed behind it. You, in turn, are able to station units anywhere on the map, but they can’t move.

These units have different abilities and firepower, and arranging them in different formations will make your defenses a lot more effective. For example: surrounding a medic with tanks means your units will be healed as they fight, while placing snipers behind tougher troops allows them to pick off enemies at less risk.

While placing units at random around a map will work for a bit, tactics become increasingly important to one’s survival. You need to figure out which formations work the best, which units you’ll want to level up first, and when an air strike should be called in to give you a little breathing room when things get really hectic.

Currently there are only three different maps available. One is pretty standard, with no extra challenges outside of the waves of enemies that show up. The next map has an increased level of difficulty and your troops suffer environmental damage at regular intervals. Finally, there’s a level where you can’t see enemies until they actually come close enough to engage your units in battle (which makes tactical formations difficult to plan out). 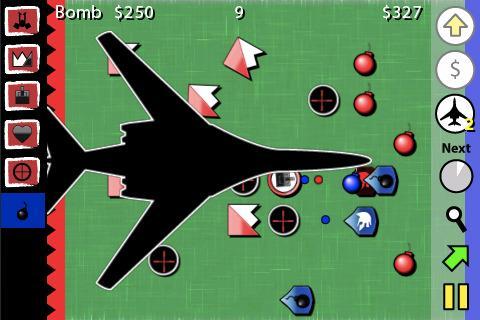 While the three different map types certainly provided a variety of gameplay, it’s obvious that the game is light on content right now. In the future it’d be nice to see more maps become available, with each one affecting the way the game is played.

The game’s graphics are extremely simple, but that doesn’t mean they’re ugly. The battle map doesn’t actually feature any real detail, and units are little more than badges with different shapes and icons. The lack of polish is actually kind of refreshing, and reminded me of the strategy games one would play on PCs back in the early days of video games.

Even though Bump Wars seemed somewhat rudimentary at first, the game managed to charm me after I read the tutorial. Despite its simple appearance, this is a game that is full of fun and hidden depth. It requires some serious thought, skill, and just a little luck to beat, all of which make for a great strategy title on the iPhone.