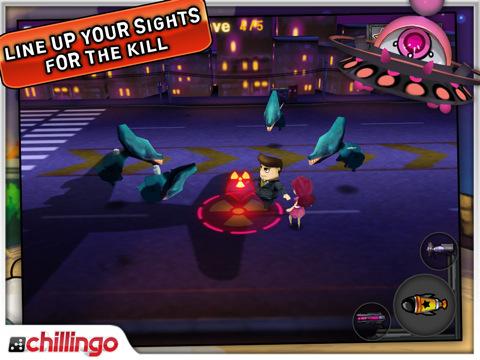 While most games would rather choose between being a tower defense or a shooter, Bugs Wars combines the genres in excellent form

Tower defense games are a dime a dozen on the iPhone, and many of them are great, but Bugs Wars manages to be the most unique of them all due to its somewhat more hands-on approach.

Instead of simply placing towers along a set path, players have to actually aim and shoot from their tower to protect innocent people in Bugs Wars. Not to worry though, the innocents will reward you with plenty of cash after each wave of bugs, allowing you to purchase plenty of much needed upgrades when you need them.

The control style presented works astonishingly well, too. Using your finger, you can slide the crosshair anywhere you’d like on screen and then just tap the big red fire button to shoot. Switching weapons is as easy as tapping on whichever one you’d like. Bugs Wars clearly shines in places where other shooters on iPhone are usually dull.

The enemy variety contains just a few standard alien bugs, most of them killable with just a few small laser shots. Once in a while a rather giant bug will appear, requiring a bigger punch to knock them out. Luckily Bugs Wars provides quite a varied arsenal to go with it.

You can vanquish enemies with lasers, nuclear bombs, machine guns and more. After each completed level players will be given the opportunity to purchase these additional weapons; keep in mind however that you can only carry four of these weapons with you at any given time. These additional weapons also have limited ammo, whereas your standard gun is unlimited so it’s only smart to use them only when needed.

Graphically Bugs Wars looks mostly good, but there can be a few jagged lines here and there that muddy the experience. The sound is fine too, with each bug having their distinct audio cue and fitting music for the scenes.

With all these great achievements to speak of, there are a few problems presented as well in Bugs Wars. There isn’t much variety in the levels besides a few different bugs. And sure, shooting different bugs can be quite a change, but the environments tend to look rather drab after you’ve been gunning down aliens for the hundredth time. Also, the addition of multiplayer could have helped in the variation of things. Playing with friends who could serve as the alien bugs certainly would have added hours of fun. Yes, Bugs Wars has a leaderboard option to compete with your friends, but real time action adds an additional layer of depth to the mix.

Having said that, Bugs Wars is a great iPhone game with plenty to offer most mobile gamers. Despite a few setbacks in variety, the game still manages to be plenty of fun in short bursts, which is just about all I could ask of an iPhone game.

Back to the Future: The Game, Episode 2 – Get Tannen! Review