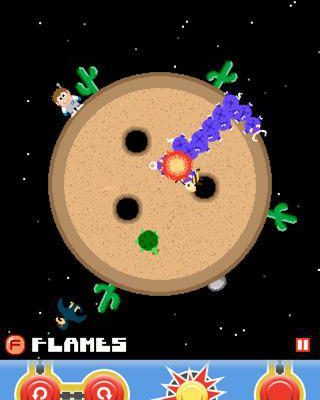 Survival games, physics-based puzzlers, bowling games, casual treats – Backflip Studios seems intent on covering all the game genre bases with its impressive portfolio of freebie titles. Now you can add retro shooters to that list, as Buganoids pays a direct tribute to the action games of the 1980s.

Backflip being Backflip, it’s managed to hone the genre down to a series of static screens. There are no elaborate enemy formations to contend with here, no bullet swarms to negotiate your way through.

Your little spaceman materialises on each distinctive micro-planet ready to do battle. At the bottom of the screen you have four virtual buttons (lovingly rendered like some long-lost arcade game) – two directional controls that send you scampering clockwise or anti-clockwise around the planet, a Fire button and a Bomb button that initiates a limited smart-bomb attack.

The target of your ill-defined ire is a variety of indigenous species living in the craters of each planet – all of which are handily placed at the very centre of your circular route. As they pop their little bug-like heads out, it’s down to you to blast them with whatever weapon is to hand. 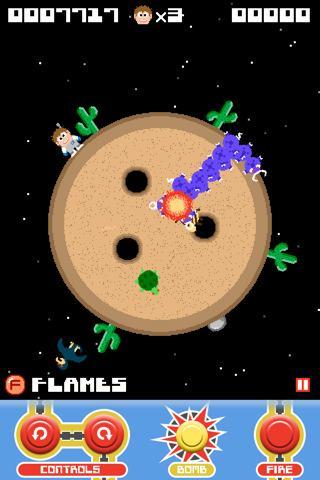 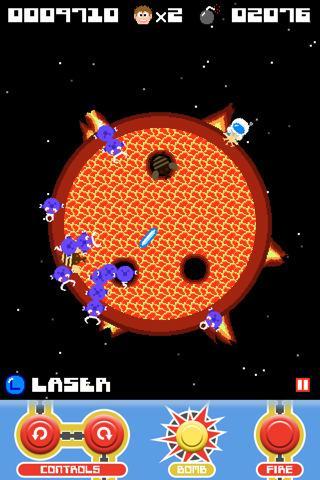 Your default tool is a fairly weedy pistol, but you’ll soon get to upgrade (power-ups magically form from downed enemies) to a number of far meatier alternatives. There’s the laser, which cuts through multiple targets, the flame thrower with its potent span but limited range, and the rocket launcher with its impressive explosive power. The latter can lead to the biggest pratfall of them all – shooting yourself. As you move faster than the projectiles, it’s quite possible to nip around to the other side of the planet to catch your own shot.

Movement itself is a bit of a hazard. Most of the bugs will head for the outside perimeter, at which point they become extremely dangerous. Not only can they attack you, robbing you of one of your three lives instantaneously, but they then become far harder to hit. Indeed, the only way to hit a bug on the outer perimeter is to swing around to the opposite side of the planet, the greater range making for a trickier shot than normal. More often you’re best advised to run away and wait for them to come ‘in-land’ again, where you can pick them off at your leisure.

It might sound fairly easy to manage, but in Buganoids your own speed is often your worst enemy. You zip around so quickly that you can easily miss that troublesome bug which has made its way to the other side of the planet. It’s invariably you that runs into trouble rather than the other way around.

Part of this, it has to be said, is down to the slightly iffy controls. While they certainly look the part, the virtual buttons are too small for their own good. Alarmingly, given that they’re all squished together at the bottom of the portrait-view screen, it’s easy to miss a button press – especially in the heat of the moment when you’re focusing on enemy positions while simultaneously lining up your shots.

For a retro-styled shooter, Buganoids isn’t quite precise or responsive enough, which proves to be a significant downer in a game that relies on swift reactions and instantaneous control. Ultimately, while it’s a fun and quirky shooter which has been lovingly crafted to remind us of the games of our youth (real or imagined), Buganoids just doesn’t quite have the same effortless pull as the better games in the Backflip Studios range.