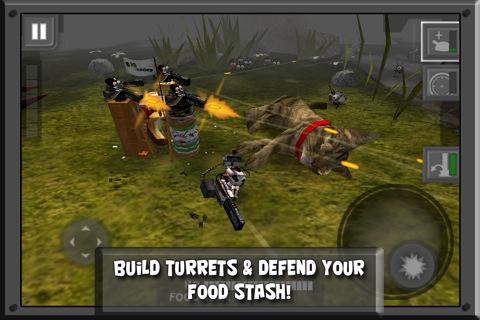 We’re often told that the insect kingdom is a ruthless one. According to Bug Heroes, it’s even worse than we suspected, with our miniature friends taking up automatic weapons and sharp implements in an epic two-faction war. Foursaken Media’s twin-stick shooter-meets-tower defense game will make you think twice about stepping on those creepy crawlies in future.

The game grants you direct control of three disparate heroes, who have formed an unlikely alliance in a bid to prevent successive waves of rival insect attacks from eroding their food stash. There’s a reluctant ant who totes a whopping great machine gun, a cigar-chomping beetle who can take a pounding as well as give one out with his blunt instruments, and a spider assassin who can zoom around slicing and dicing well-armoured foes.

You can flip between these bug heroes any time you like by tapping them, but control remains the same for each. A virtual stick on the left-hand side of the screen takes care of movement, while another on the right directs an attack in the appropriate direction. You must flip between the three heroes according to the threat at hand, whether that be fighting gun-fire with gun-fire as the ant, thinning out swarms with the beetle or taking on tough individual slugs with the spider.

Using each bug grants you experience points, which serve to let you level up at key points. At this point you can choose to improve one of four areas pertaining to endurance, movement and attack effectiveness. Another neat way you can improve is through the money you gain by defeating opponents and completing optional side-missions. This can be put towards improved weapons for each bug.

That’s not all you can spend your pennies on, though. As mentioned at the outset, Bug Heroes has a healthy tower defense element that really makes it stand out from the App Store crowd. Around your food stash are four slots, each of which can host a separate automatic defensive turret. Starting out with the default arsenal of a machine gun, a zapper (for slowing down enemies) and a sniper tower, you’ll unlock more and more varieties as you go along.

As with your heroes, you can also choose to upgrade these towers, granting them increased range and power. It’s these varied customisation options that really make Bug Heroes interesting, carrying it beyond the usual mindless action fare.

It has to be said that Bug Heroes is a challenging game, and you’ll likely struggle to reach double figures in terms of rounds survived at first (on Medium and above, at least). However, the presence of four arenas (which unlock mercifully quickly) in Adventure mode and an additional one-bug-against-the-world Coliseum mode help stave off any sense of grind or frustration. 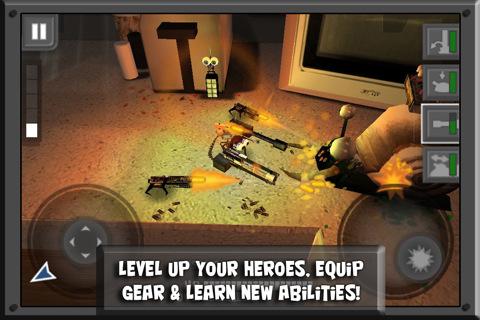 Still, Bug Heroes is not for those who want an easy time, or something they can breeze through during the odd ten-minute break. It requires real concentration and careful thought to come up with – and execute – a successful plan of defense. Should you venture out to try and find more food at the expense of leaving your existing stash unguarded? Should you accept that new side-mission, which will reward you handsomely but introduce even more deadly enemies to the screen?

Exploration of each open level can be a little too hard, with little pause for respite in between rounds. Combined with the fact that it’s impossible to know how many bugs are left, or where the collectible food and side-mission items have spawned, such ruthless unpredictability pushes you to play a little too conservatively at times.

Still, Bug Heroes should be commended for its expert juggling act. In keeping intense action, strategy and RPG elements in the air simultaneously, developer Foursaken Media must have six arms of its own.