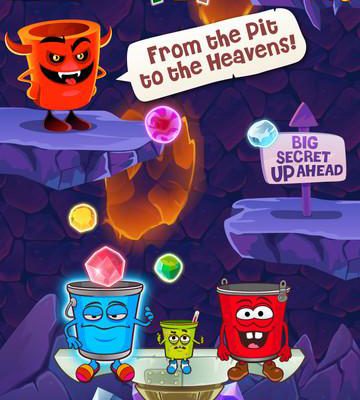 There’s a hole in this balancing bucket.

A sequel to last year’s quirky and well-received Bucketz, Bucketz Ride expands the basic physics-puzzling formula of the first game, and adds some interesting new twists and designs to always keep those buckets half full. Bucketz Ride is certainly a strange beast of a game, and while I can’t say I particularly enjoyed the overall ride, I do have to admit that I’ve never played anything quite like it on the App Store before.

I’m not really even sure how to go about describing the game, so I guess I’ll just say it in the simplest way that I can. In Bucketz Ride, you play as several personified buckets who are trying to fly their way out of the fiery Pit, and into the bright and blue skies of the Heavens. As the buckets make their ascent, different colored meteors, gold, and rocks will all be flying around on the screen, which you’ll need to snag with your finger and drop into your buckets to make them climb faster and earn some extra point rewards. The buckets’ vehicle acts as a balance beam of sorts, so as you touch and drag the items into your buckets, you’ll always have to make sure everything is leveled out, or else you’ll go tipping over and fall straight back down into the Pit. 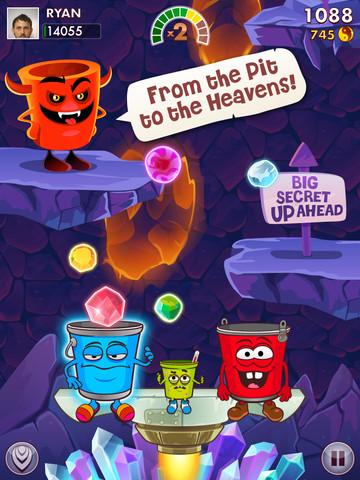 After a rather abrupt comic book-style “Previously On…” segment, Bucketz Ride launches right into its strange mix of balancing and arcade gameplay. The tutorial is a lot to take in at first. Instead of gradually introducing players to the core game mechanics they’ll encounter on their journey towards the “Big Secret” in the sky, Picnic Hippo throws everything they’ve got all at you at once, barely giving you enough time to get situated with one gameplay component before you’ll need to quickly accommodate for the next.

The balancing act also starts to become a slight issue as well. Your buckets are all different sizes with different storage capacities, and the items you drag into them are all different sizes as well. Naturally, while dragging an enormous boulder onto your smallest bucket will squash him in seconds, some of the others parameters are a lot less clear, and the game will quickly turn into the player’s random dragging and dropping of items until those frantic white arrows appear to alert you that one side is beginning to tilt.

But with that being said, Bucketz Ride certainly isn’t wont for things to augment the basic gameplay. In any five-minute timespan, you’ll be sure to encounter special wrapped gifts and coins to click on, balloons to balance out the lighter of your buckets for a short and worry-free interval, and fluttering umbrella collectables to snag for a similar bonus. There’s even a bit of Fruit Ninja thrown in there as well, as you try your absolute hardest not to touch those pesky smoke grenades that get lobbed onto the screen and can seriously obscure your careful bucket balancing. 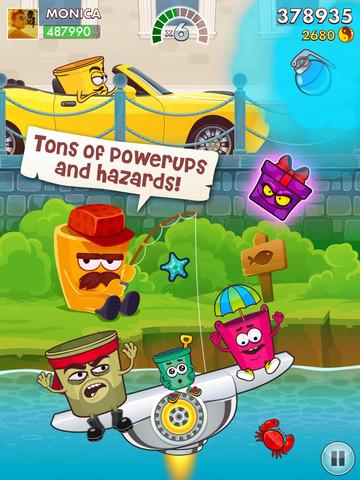 Unfortunately, switching back and forth between the fast-paced “tapping on stuff to collect it” gameplay and the decidedly more methodical “touch and drag into your buckets” winds up making the entire experience feel just as imbalanced as that mobile balance beam your buckets are always teetering on. The pacing of the game just seemed weirdly off to me, as the buckets’ slow and steady rise was completely offset by the frenzy of collectables always flying around them.

Whereas the first game felt more segmented into different chapters with challenging boss fights at the end of each, Bucketz Ride adopts more of a singular approach, with one massive journey from the Pit to the Heavens. This actually works surprisingly well in the game, and the inclusion of ongoing achievements (like we’ve seen in most endless runner games) also proves to be a fairly nice touch. Your overall progress will be marked on a fantastic and colorful world map, and gameplay aside, Bucketz Ride certainly has a whole lot of heart and personality in the look and feel of those personified buckets.

I’ll admit I had a difficult time writing this review at first, because Bucketz Ride certainly is a great looking great, and there are all sorts of fun and stylized content to keep players coming back for more, and to make another dent in their overall climb towards the Heavens. But the truth of the matter is that I didn’t really find anything about the gameplay to be all that particularly fun, and the whole bucket balancing act just gets extremely old before long.