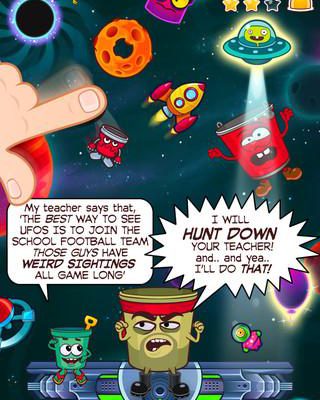 If there’s anything I can truly hate Angry Birds for, it’s that the ridiculous App Store success has inspired hundreds of independent developers to believe they can follow in Rovio’s footsteps. As an app game reviewer, it isn’t long before you’ll get very tired of the countless Angry Birds clones with shameless knock-off art style. Like a beacon of light within a storm, Bucketz is not one of these titles.

While the Picnic Hippo physics puzzler might look easy to judge from its colorful and cartoony visuals, it took me about thirty seconds to realize that Bucketz had something very special to it: voice. The game’s tutorials, menus, and characters are fully voiced by talented actors, and the constant tongue-in-cheek banter adds a much-needed element of depth and color to the iOS platform as a whole. I couldn’t help but think – why haven’t other apps decided to employ audio like this in a similar fashion?

Vocals, no matter how rare they are on mobile, can’t make a great game on their own, though. Thankfully, Bucketz holds its own just fine. The name of the game is a balancing act, and it’s your goal to assign as many falling objects as you can to appropriate talking buckets on each side of the scale. It starts as a simple collecting game, but dozens of extraneous factors ramp up the difficulty pretty quickly.

For one, the game offers several different power-ups and power-downs, forcing you to constantly keep your eyes peeled instead of blindly tapping on every object that you see. I couldn’t count the amount of times I ruined my field of vision because I hit a smoke bomb, and every single time I had no one to blame but myself. New items are introduced by the game’s snarky narrator one by one, making things increasingly complicated yet still easy enough to understand. 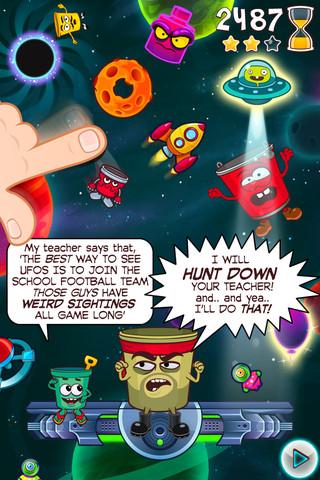 Successfully completing levels awards you with coins for the game’s shop, which can be used to upgrade the frequency and strength of different powers. Be it the balance-restoring Yin-Yang or the mistake-aiding bomb defusor, there’s plenty of reason to invest in as much as you can as often as you can.

Each of the game’s five lengthy chapters concludes in a satisfying boss battle, challenging players to balance attacks while multitasking tapping on each boss in order to drain their health. Each boss, just like the colorful cast of bucket characters, has their own absurd personality and voice acting as an additional reward. In order to survive each battle, you’ll have to employ a variety of tricks, including juggling multiple items mid-air, and appropriately assigning falling items to correctly sized buckets. 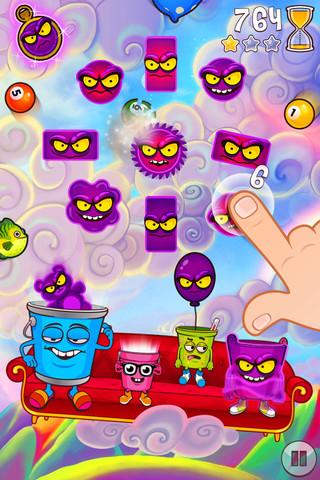 The only thing strangely absent in Bucketz, at least to my knowledge, is a “hi-score” mode. The game’s upgrade system seems like it’d lend itself perfectly to a mode that rewards playing a constant improvement of skill and long play sessions. While the missions are numerous and offer plenty of gameplay, it’s a mode that I feel I could definitely find myself getting addicted to.

Regardless, Bucketz is everything that a physics puzzler should be: unique, full of personality, and plenty addicting. The excellent voice acting is a welcome addition, and something I’d like to see more often in future mobile titles. It’d be perfect with an easily accessible hi-score mode, but even without it, Bucketz is well worth a purchase as your next time killer.