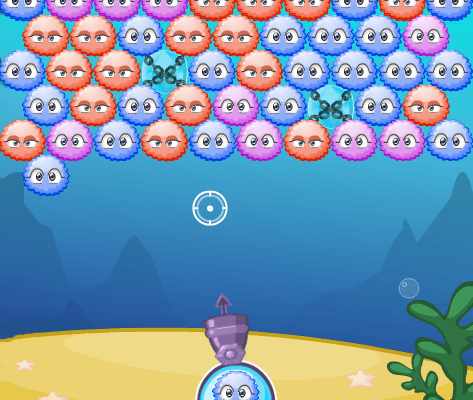 Bubble Shooter has fun puzzle action, but it doesn’t fit Facebook all that well

Bubble Shooter has a lot what you’d be looking for in a puzzle game. Challenging, Bust-a-Move style gameplay, cute and colorful graphics, and a gradual difficulty curve that eases you into the experience. But it also does virtually nothing to accommodate the Facebook platform. There’s a dearth of social features and the game’s structure actually runs counter to what most players want out of a Facebook game.

The gameplay is simple, and something you’ve likely seen plenty of times before. It’s match-3 of the Bust-a-Move variety, which means you’ll be firing colored balls at a screen full of colored balls in an attempt to match up groups of three or more of the same color. When you get a match they disappear. As you play a giant weight pushes the balls slowly towards the bottom of the screen and if the balls every reach the bottom it’s game over.

As you progress through the game the levels will become more challenging, with more balls on screen and different colors to deal with. Some of these colors can be difficult to differentiate from one another, with purple and pink being frustratingly close to each other, but there are other ways to determine what color a ball is. Because they aren’t really balls, instead they are what appear to be colored, squishy meatballs with eyes. And each color has different looking eyes, so if you struggle with differentiating between two colors, you can always look into the ball’s eyes to find the truth. 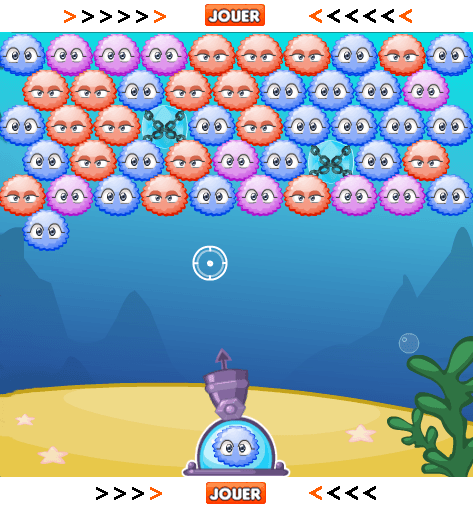 The problem, though, is with Bubble Shooter‘s structure. It’s set-up like an arcade game, and as such doesn’t really mesh well with the quick bursts of gameplay Facebook gamers are used to indulging in. You make your way through a series of increasingly challenging levels, but if you either get a game over or simply exit out of the game your progress is reset. You can’t pick up where you left off. This means the only way to see everything in Bubble Shooter is by playing one extended session without losing a single stage.

There’s also some noticeable slow down and flickering, which undermine the otherwise charming presentation. The aforementioned anthropomorphic meatballs are particularly cute with their expressive eyes and squishy appearance, and overall the game is just plain nice to look at.

The game is available in several languages, but defaults to French. But even when you change the language settings the game won’t remember it for long. As soon as you start up a new game everything will be in French again. And much of the game isn’t even translated. So if you want to boast about your most recent high score, it seems you can only do so en francais.

While the core game is solid and the presentation great (aside from some technical issues) Bubble Shooter isn’t particularly well suited to Facebook. You can’t get that quick burst of satisfying gameplay that similar puzzle games on the platform, which is a shame because with a different structure Bubble Shooter could be on the same level as a game likeBubble Island. But as it stands, there are currently plenty of better options out there for your Facebook puzzle game time.