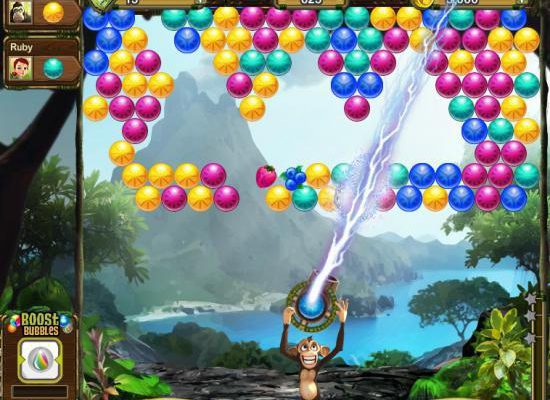 Embark on a jungle adventure and fire bubbles out of a handheld monkey cannon!

Zynga was one of the first well-known developers on Facebook, but that pedigree doesn’t guarantee the company’s future success; in order to stay competitive in the increasingly competitive social game arena, it’s got to keep innovating. Of late, the mega-developer – best known for its “Ville” titles – is making new flavors of casual entertainment, and one of the best thus far is jungle-themed bubble popper, Bubble Safari.

As you might guess with a game called Bubble Safari, the game is set in the jungle. You’re not playing an explorer or treasure hunter though; you’re a chimp. A chimp bent on revenge. When the game starts, you’re minding your own business, hanging out with your cute little chimp girlfriend, when poachers appear and take you both prisoner. As luck would have it, the crate you’re in bounces off the back of the truck, unexpectedly freeing you. Your poor lady friend isn’t so lucky though, and as she sadly waves goodbye to you from the back of the quickly-vanishing truck, you swear you’ll get her back.

You’d think a chimp wouldn’t be especially well armed, but this one comes equipped with a sizable, handheld cannon. This unusual weapon fires not cannonballs, but varicolored bubbles. The idea is to fire your cannon at big, multi-colored bubble clouds and pop them; the more you pop, the more points you score. For bonus points, you can also make sections of bubbles fall and turn into fruit. This fruit bounces off the heads of cute little flying birdies and scores you mucho bonus points. To complete levels and move on, you have to make all the bubbles drop. It’s much harder to describe than to play and trust me, it’s a ton of fun.

Things start simple and you’ve got around eight levels to get your bearings. Soon after that however, the game becomes much more difficult as bubble formations and objectives change. One technique you must learn is how to bank bubbles off the sides of the playing field. Without mastering that, you’ll never get through the crazier formations. You’ll also want to learn how to use your bubble projectiles sparingly, since whatever’s left at the end of the level grants you both bonus points and gold coins. Points are important, because unless you score high enough to earn at least one gold star, you’ll be playing the level again. Coins are important because they allow you to purchase powerups in the in-game store. 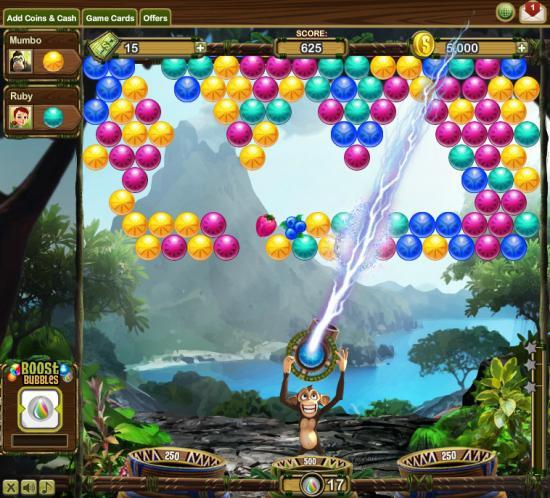 What’s great about Bubble Safari when compared to other Zynga games is that your playing time isn’t limited by energy in the same way. Although playing costs energy, as long as you clear levels, you’ll keep earning energy back. This enables you to play for much longer than say, the “Ville” games, which force you either to buy more energy or to beg your Facebook friends for it.

Another interesting new element of Bubble Safari is a social mechanic called “Bubbles From Friends,” which allows you to ask friends playing the game for extra bubbles which you can then use if you get stuck at the end of a level. Thankfully, you can only ask the same friends for help every 18 hours which should minimize the pester-potential of the mechanic.

If you’re uncomfortable asking your friends for bubbles, you can always use gold coins to buy entertaining powerups like Lightning Bubble, which destroys things in a straight line, and Rainbow Bubble, which matches any color. If you’re especially good at dropping bubble fruit and manage three drops in a row, you’ll enjoy a special “on fire” mode that lets you blast through anything—hilariously—to the tune of Tchaikovsky’s 1812 Overture. If you’re not so good at earning coins or employing these various techniques, you can buy useful boosts for around thirty cents each and unlock new areas of the safari map for a reasonable $1.50. 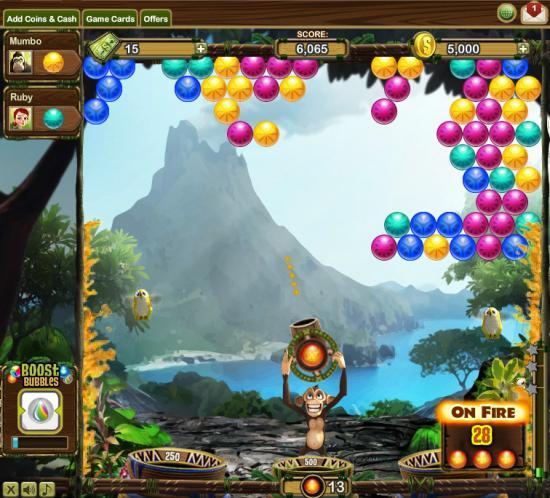 These are Bubble Safari’s good points. What’s less than great about it is its dogged adherence to some of Zynga’s most odious practices. It’s bad enough that Zynga games force you to irritate other people by having to wheedle their cooperation out of them. Now the games have insidious pop-up boxes that imply your friends are already playing and won’t mind being tapped for help. Upon closer inspection, you’ll see that these boxes merely list random selections of your friends in hopes you’ll accidentally persuade them to play. This deception is just wrong and (according to my personal Facebook circle) is a sure-fire way of getting yourself un-friended. Related to this, the game also has built in pop-ups that ask you to invite people in order to continue playing. Once you hit “invite”, you can then close the boxes without inviting anyone, but less savvy web users might not realize this.

Despite these irritating, carnie-like practices, Bubble Safari represents a strong departure from Zynga’s usual area-management and role-playing fare. Skilled players will get a good amount of gameplay without ever cracking open their wallets, and players who choose to spend a few bucks will have just as much, or even more fun.