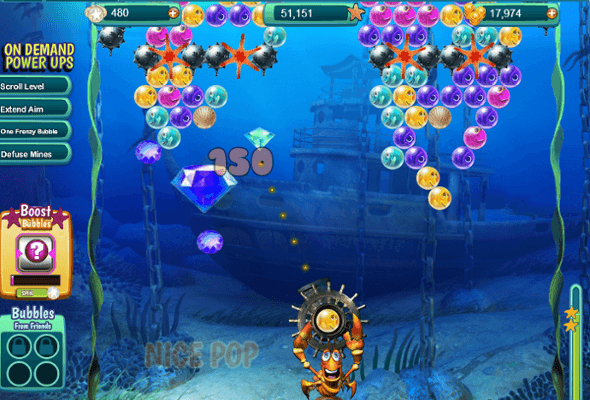 Save the baby crabs from the evil rainbow bubbles!

The news hasn’t been good for Zynga lately (what with its falling stock prices and all), but the once-dominant social games publisher soldiers on, releasing new title after new title. Its latest release, Bubble Safari Ocean, is a colorful match-three bubble popper that’s undeniably entertaining. Unfortunately, five minutes spent playing the game will make it apparent that, for players of the original Bubble Safari, things are a bit too familiar.

The original Bubble Safaritakes you to the jungle where you control a sassy (and slightly manic) monkey armed with a bubble cannon. The idea is to clear bubble-popper/match-three levels to create a path through the jungle, thus allowing for the titular safari. In Bubble Safari Ocean, the idea is similar; you’re still clearing a path, but this time it’s on the water and allows the passage not of trucks, but of sailing ships. Similarities to the original game also abound in the match-three/bubble-popping levels, but your motivation for clearing bubbles is, admittedly, more personal this go-round. Instead of a manic monkey, you control a crazed crab (OK, he’s not really crazed, but why pass up an opportunity for alliteration?). This unfortunate crustacean has lost its babies to bands of roving bubbles and your job is to pop them and free the little angels. 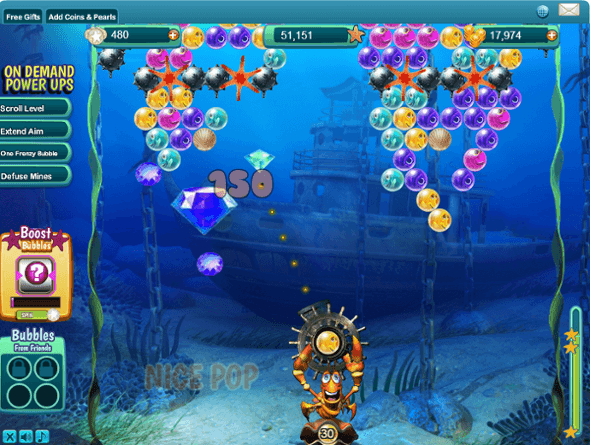 Just in case you’ve never played a game of this kind, the idea is to whittle away at the formation of multi-colored bubbles on the upper part of the screen by using your crabby cannon to fire additional bubbles at them. When your bubbly projectile hits two or more of the same-color bubbles (matching three or more), the bubbles pop (new to Bubble Safari Ocean, when bubbles pop, they rain down as colored gems). The object in most bubble poppers is to clear the board by reaching the top of the screen, but here the object is to clear the bubbles surrounding the baby crabs and then free them by firing a bubble at them or by causing the bubbles above them to fall. It’s a simple but fun and surprisingly diverse formula.

Bubble Safari Ocean makes use of many of Bubble Safari‘s mechanics, including various purchasable power-ups and the ability to spin for a Boost Bubble. Power-ups are bought with coins earned by clearing levels and consist of things like more accurate aim or extra bubbles. Boost Bubbles can’t be bought outright, but are earned as you play the game. The Boost meter builds up the more bubbles you fire, and when it’s full, you’re given the option to spin for a Bubble. Boost Bubble come in different types, like Paint Bubbles (that turn every bubble they hit into the same color for easier matching), Trident Bubbles (that shoot lightning), and a range of other highly powerful varietals.

Points are scored for matching bubbles and scores can be amplified by strategically engineering bubble drops. Get three of these in a row and you trigger Bubble Frenzy, a mode that grants you three explosive, obstacle-clearing bubbles. This is all very similar to the original Bubble Safari, as is the Bubbles From Friends feature that enables friends who are also playing the game to give you additional reserve bubbles. As mentioned above, the main innovation offered by Bubble Safari Ocean is the raining gem feature which enables you to pump up your scores. As gems pop, they rain (or float slowly) down, giving you the chance to drag your mouse pointer over them. The more gems you touch, the more bonus points you earn and the higher your score, the more “sea stars” (level ratings from one to three stars) you earn. Although this requires no skill beyond the ability to move the mouse quickly across the screen, it’s a welcome change to the game. 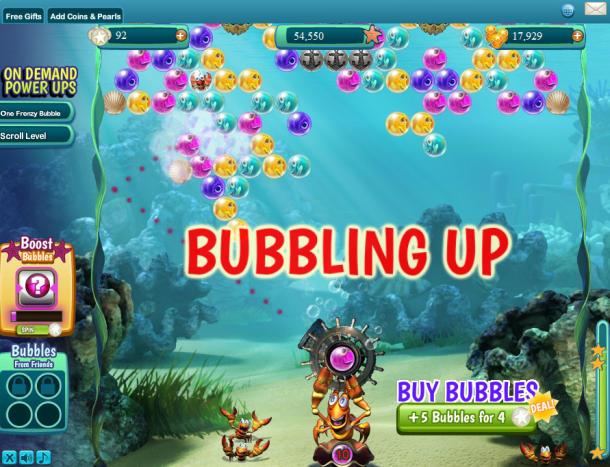 Another difference is that the game’s difficulty ramps up more quickly than Bubble Safari, and that means you need to either get really good, really fast at strategic bubble popping, or be ready to pull your wallet out. Power-ups are available “on demand” and cost “pearls,” which is the game’s term for real-world currency. Five dollars will buy you 40 pearls (the cost is cheaper the more you buy at once) and the average power-up is 12 pearls or around $1.40. At that rate, it’s likely that Bubble Safari Ocean will cost the less-patient or less-skilled players a good chunk more money to play than the original Bubble Safari.

Now and again a special challenge pops up and to get past it, you’ll be forced to ask your friends to join the game. As usual, this can be annoying. Bubble Safari Ocean doesn’t push the friend thing as insidiously as other Zynga games, but it retains my personal most-hated feature: the deceptive friends bar that falsely implies people are playing who actually aren’t.

Bubble Safari Ocean is a fun game, despite its relative lack of creativity. It’s ocean-y graphics are cute, its Caribbean-style music is fun to listen to and its visual effects are nice. Still, it offers few new features and plays overwhelmingly like a somewhat more challenging version of the first Bubble Safari.

Explorers of the Lost World Review