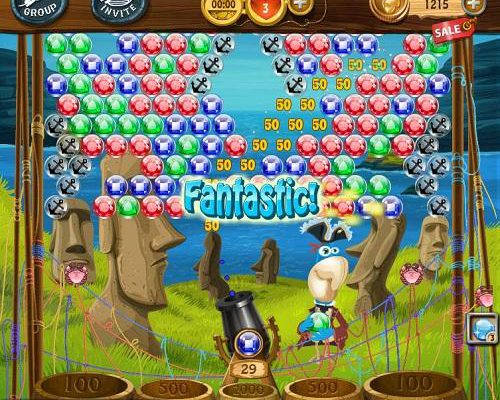 Bubble Pirate Quest is a competent but annoying bubble shooter.

Another day, another bubble shooter. The newest contender in the ring is Murzik’s Bubble Pirate Quest, which takes the usual bubble shooter formula and wraps it up in a colorful pirate-themed setting. It’s fun enough (as are most puzzle shooters), it makes no major stumbles in the core gameplay, and it’s even been released in a mobile version over the last few days. The only problem is that it’s so much like the other bubble shooters we’ve played that it’s hard to justify dumping your other favorite bubble shooter for it, particularly when it’s so obnoxious about asking you to buy things with Facebook credits.

You see this insistence as early as the first puzzle, when a sale notification pops up asking you if you’d like to buy some coins, even when you haven’t been playing the game long enough to understand their importance. That wouldn’t be so bad, were it not for the fact that it forces you to click on the option to buy coins and see the prices before you can move on to the next round. You also see it at the beginning of each puzzle, when a notification pops up letting you know that a new power-up is available for some Facebook credits, and some simple conversions reveal that these cost anywhere from $7.00 to $9.00 USD. In Bubble Pirate Quest‘s defense, it allows you to try them out before you buy, but this is one of those Facebook games that could end up costing a fraction of your monthly rent if you’re not careful. 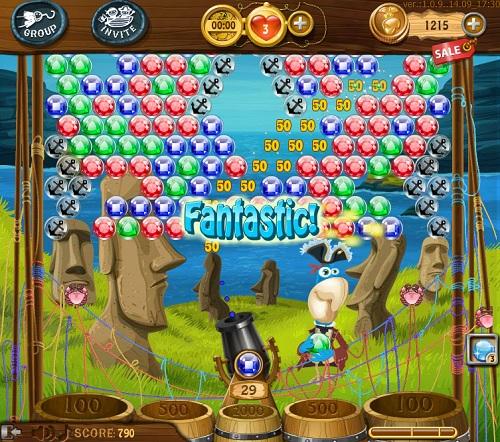 The playing field will be startlingly familiar if you’ve played other bubble shooters. You use a cannon to fire a bubble of a particular color toward a mass of bubbles dangling from the ceiling, with the objective of matching three or more to remove them and cause any other balls to fall in the buckets with point values at the bottom. That, in fact, is where Bubble Pirate Quest‘s uniqueness manifests itself through a comparatively rare mechanic, as each successful match causes a new bumper in the shape of a crab to appear toward the bottom, which makes getting bubbles in the highest scoring bucket even easier. Of course, if you fail to make a match, the bumpers reset.

Getting a good score is a little more important than scoring bragging rights with your friends, though: if you fail to earn enough points to qualify for one star in the three-star achievement system (a la Angry Birds), you’ll lose the level — even if you managed to clear all the bubbles. This rarely happens, admittedly, and for all of its nagging to buy items in the cash shop, Bubble Pirate Quest is comparatively liberal in the amount of levels it lets you play before you need to start bothering your friends to join or pay cash to advance. In this case, you’ll get to sample 15 levels dotted across a couple of islands on the Pacific-themed progression map before you hit the social pay wall. It even gives you three “lives” with a fairly short recharge timer to tackle a level you’ve failed. 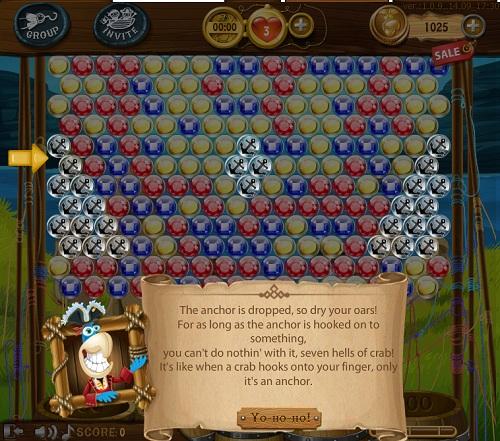 But then again, its pestering grows tiresome. Notifications with barely comprehensible “pirate speak” messages disrupt the gameplay by popping up in the middle of levels, and the rate at which you earn coins by winning is slow enough that it’s obviously aimed at making you spend more money in the cash shop. Other bubble shooters accomplish the same ends without this level of annoyance, and it’s regrettable that it’s employed in a game that’s so similar to its many competitors. As a result, you may find yourself waltzing back to your other bubble shooter after a few levels.