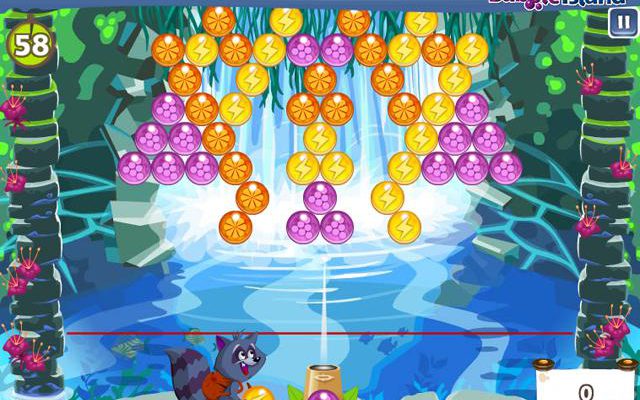 Bubble Island is another excellent social puzzle game for Facebook

There are only a handful of social takes on puzzle games available on Facebook, but Wooga’s Bubble Island is one of the best you’ll find. The game features two basic takes on the type of match-3 gameplay where you shoot colored spheres up at a wall of colored round objects that slowly descends toward you. There’s a weekly game where you race to get a high score in 60 seconds, similar to Bejeweled Blitz, and then a full-featured story mode that begins very easy and turns into a very stiff challenge once you’ve opened up the last few segments of the map.

Bubble Island is ultimately timer-based even when you play in story mode, since the game only gives you a certain amount of time to decide on a shot. It begins as a comfortable length of time but eventually is no more than three seconds. In story mode the level designs tend to be puzzle-like, requiring you to bounce shots off of walls and eliminate spheres in a very careful order. You get bonus points for causing spheres to drop by eliminating the spheres that hold them, but also suffer a point penalty when you use too many spheres to finish a level. 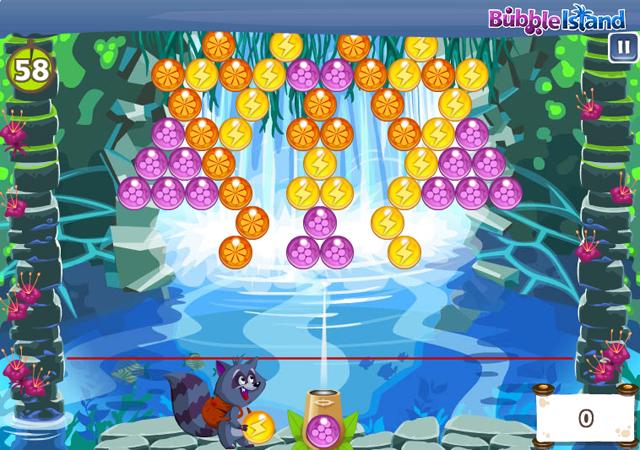 To get a high score in story mode, you need to be able to finish levels using as few spheres as possible. In the weekly time attack level, how many spheres you use doesn’t matter. All that matters is how many matches you get and how many spheres you get to drop off the screen. Both modes of play have certain power-ups that make things easier and can increase your score. Story mode has extra lives that let you retry levels as soon as you fail them and retry kits that make a level a little bit easier when you play it a second time. Weekly levels have time and point boosts you earn when you match spheres.

Bubble Island is an extremely good-looking game, which is to be expected of Wooga by now. The visual style uses the same emphasis on highly-detailed, cartoon-like 2D visuals. Bubble Island is less of a feast for the eyes than other games like, say, Monster World, but also by necessity features less varied images. The main things you see when you play are the flying spheres and the little raccoon who loads your cannon for you. The raccoon also staggers and gasps when you’ve in danger of losing a level. Otherwise the game is brightly-colored and pleasant to look at, but not a lot moves in it. 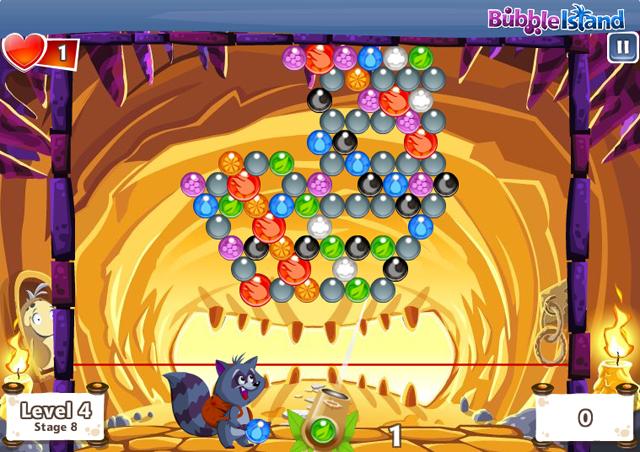 Bubble Island is an exceptionally good game with very little to complain about. At worst, you could maybe say that the resolution makes later levels a bit harder to play, since the spheres get smaller toward the end of story mode. Match-3 fanatics may find that more a feature than a bug, though. Bubble Island offers the sort of depth that critics of Facebook games often accuse the platform of lacking. If you’ve never enjoyed even any other Facebook social puzzle game before, you should at the very least give this one a try.

The Serpent of Isis: Your Journey Continues Review