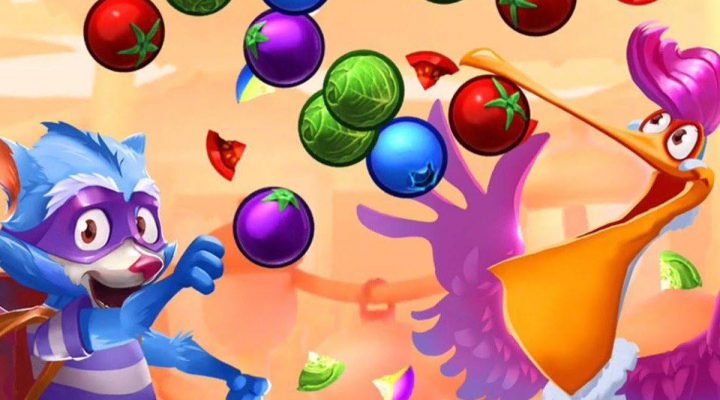 Three free lives instead of the standard five

Bubble shooters are essentially all based around the same mechanic: shooting an orb at a matched target to remove surrounding orbs and clear a field. There are ways to mix up a bubble shooter by creating different goals, adding explosive boosters and introducing new characters, but ultimately, everything is going to come down to how you shoot. Wooga’s Bubble Island 2, though, offers a dynamic, responsive environment that actually elevates simple bubble shooting into the realm of physics-based puzzle solving. 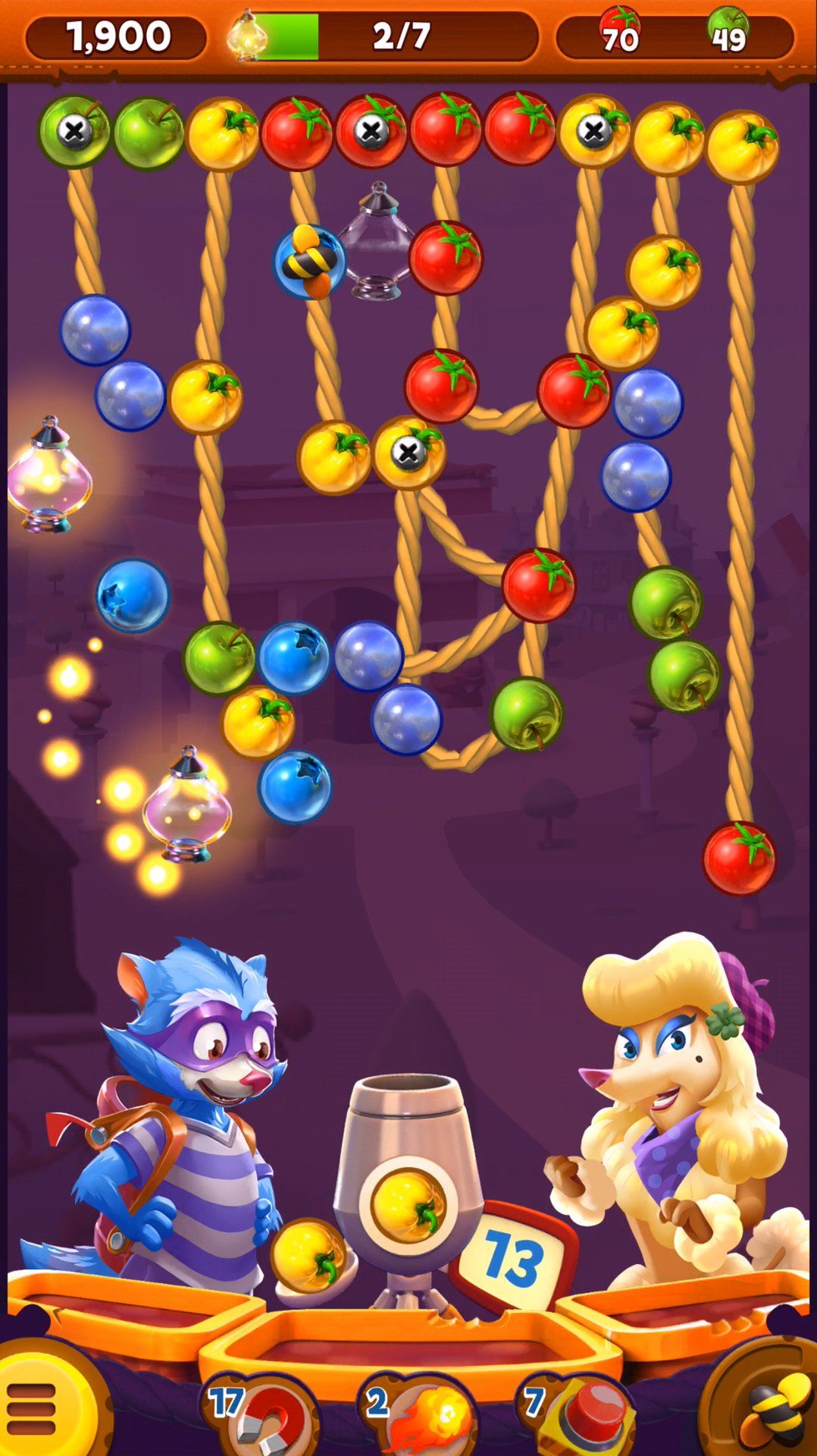 The casual cartoony artwork of Bubble Island 2 will feel familiar, and there is something of a story on top of the regular gameplay of each individual level. Your goal as Rico Raccoon is to travel through the world, building landmarks and monuments with the help of animal friends you make along the way. However, I didn’t find myself connecting to the story or the characters much. There is some level gating which requires you to go back and play earlier levels to collect more resources or characters to build monuments for you. The level progression is fair, though you may notice the difficulty ramping up in the mid-thirties (like life?) so you’ll want to hold off on using your limited free boosts until things start to get really challenging.

But these smaller aspects of the game design are pale in comparison to the true magic of the game: its dynamic physics. Without the story layer or additional building challenges, the impressive level design would be enough to make Bubble Island 2 stand out amongst others in the genre. The basic mechanics are recognizable, namely, shooting a little round fruit into more of the same to make those matched fruits disappear. However, Wooga’s brilliant addition is to make the target fruits all completely responsive to everything around them. 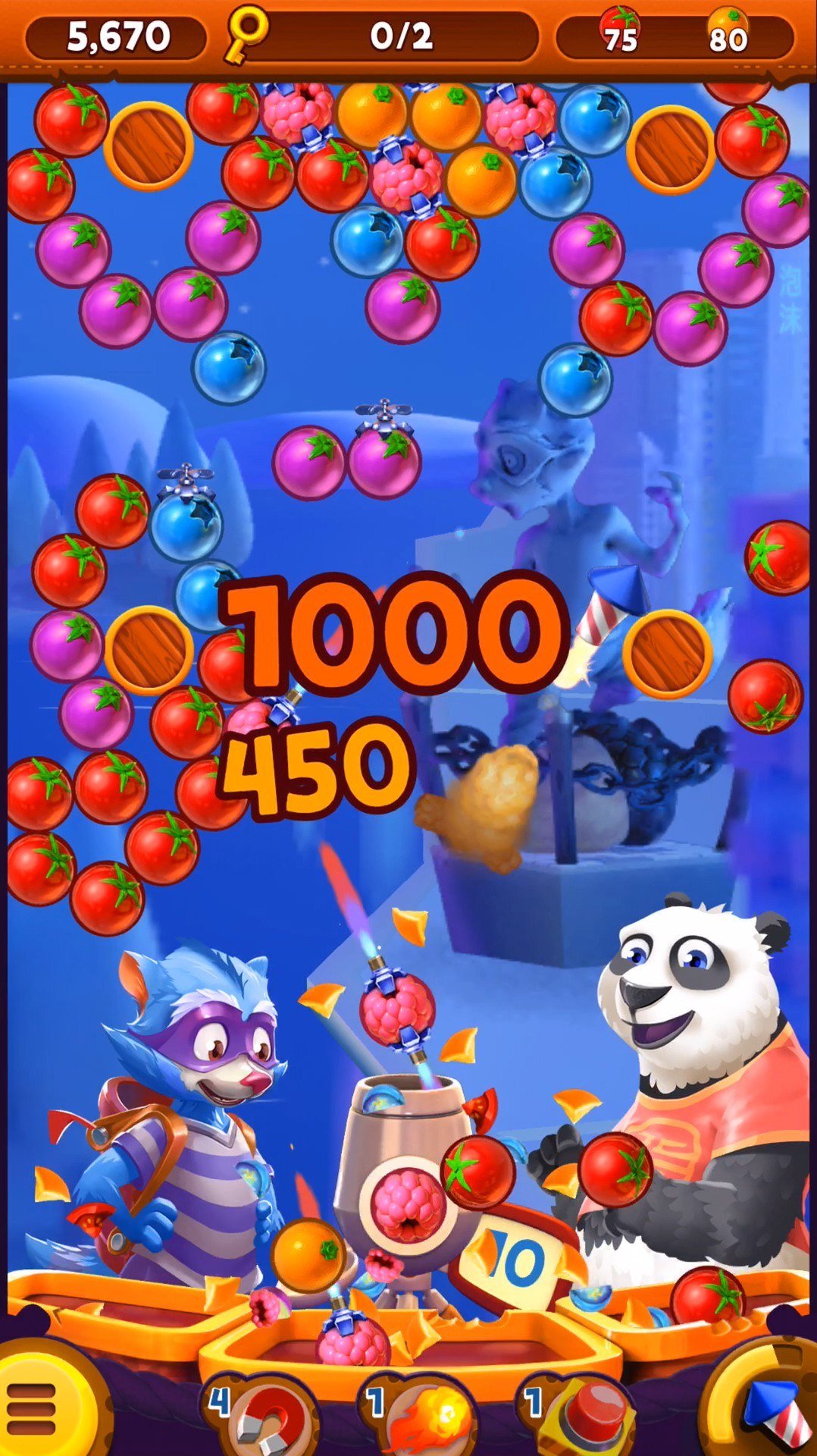 As fruits fall, they’ll come into contact with others of the same color on the board and they can trigger effects from them. Wind, fire, and pressure from a hot air balloon will constantly adjust spinning obstacles. Even the movement of fruits themselves will effect the hot air balloon’s ascent toward the goal. Dangling nets and screws create cantilevers that can pivot, changing the outcome of a well-targeted shot. With the entire environment being responsive, players can plan out a complex daisy-chain of effects that can wipe entire boards in just a few moves. Watching the results of these chain reactions in real time makes decision-making feel much more impactful and dynamic than the average game of its style. As such, each board feels more like a puzzle to tease out than just some fruit to shoot at because the colors match.

Bubble Island 2 does have some low-hanging opportunities for improvements. Currently, players are only given three free lives, which is a noticeable departure from the common standard of five lives. Upping lives to five would likely be a welcomed change for frustrated players in the advanced stages of the game. Also, loading times after every screen change feel excessive and almost on par with a complicated action RPG tracking dozens of player changes every moment. For a casual game with relatively consistent progression, the need for screen-by-screen loading seems unnecessary.

Ultimately, fans of the bubble shooter genre will love the new physics and unexpected challenges (and opportunities) they bring. The dynamism and responsiveness of each environment, along with the fun tools at your disposal, make each level far more engaging than your standard bubble shooting experience. Bubble Island 2: World Tour is free to play and worth the download for anyone who loves to pop.