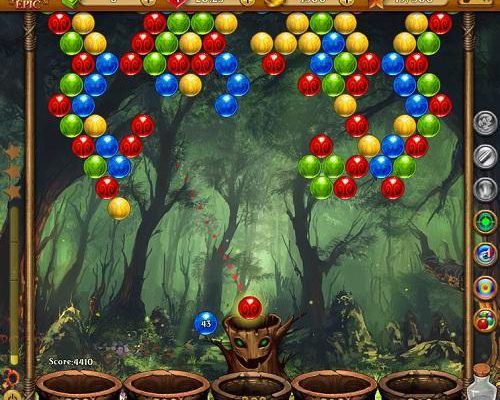 Bubble Epic is an enjoyable bubble popper, though “epic” might be too strong a word.

The first thing that made me like Bubble Epic was the eerie but amicable tree trunk that shoots out the projectiles in this new bubble popper. It reminded me of my younger days in gaming; specifically, the art style of 1990’s Gargoyle’s Quest, and I found myself expecting additional touches of “epicness” to an increasingly tired genre. Unfortunately, the feeling wore off quickly, and I was left playing a bubble shooter that felt like others in the genre despite some fine touches to its aesthetics and minor changes to its gameplay.

That’s not to say that it doesn’t try. Bubble Epic is a beautiful game, and aside from the bubbles themselves (which still sport the happy primary colors of so many of its cousins), the general ambiance is one of earth tones and well-worn parchment, broken only by a few typos and at least one minor button that doesn’t work when you work when you click on it. 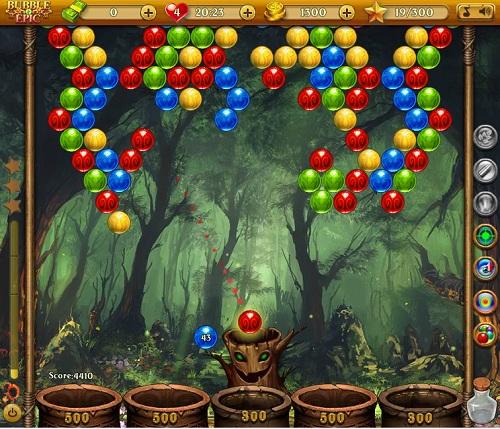 The music itself is quietly epic–although it grows tiresome in long playthroughs–and it hints of long journeys across the sprawling, 100-level fantasy landscape that serves as the level map. There’s even a story of sorts to follow via a book at the lower right of the screen, which uses every opportunity to drive home how epic the experience of popping bubbles will be.

It’s thus dressed up nicely, but at its core, Bubble Epic is just another bubble popper. You fire a bubble of a particular color from the hollowed tree trunk at the bottom of the screen for the purpose of making a match with two or more bubbles at the top of the screen, thus clearing your way to the top. Your bubbles are limited, so you’ll lose a turn if you don’t clear at least 10 bubbles on the highest row with your available bubbles. There’s a welcome but familiar option to switch out one bubble with the next in line by switching the spacebar, and you’ll occasionally find items hidden among the bubbles that you need to free by popping bubbles around them. In its favor, Bubble Epic more forgiving than some other poppers in that bubbles didn’t get stuck when I was shooting at a particular bubble beyond a gap created by two other bubbles. 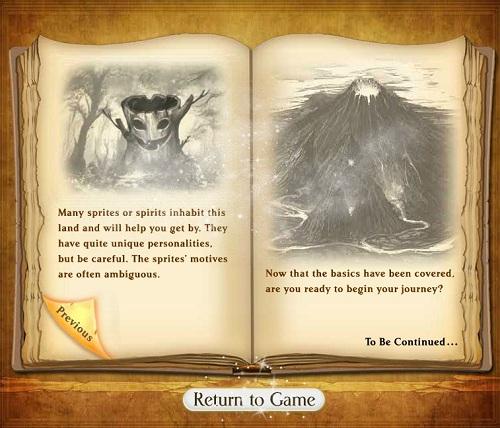 There are a few hints at innovation: at the bottom of the screen, for instance, you’ll find a series of buckets like those you find at the end of a round in Peggle. As bubbles fall in these as you clear them from the top, they award increasingly higher point counts as long as you’re making matches. Miss one, and they’ll reset. There’s also a tree that works along the same lines as Bejeweled Blitz‘s practice of rewarding you with coins for you and your friends’ accumulated point totals for the week, although here the goal is to contribute the “Heavenly Drops” found among the bubbles.

Beyond that, you’ll find an assortment of familiar features, such as a host of powerups, three stars that rate your performance on a map, and a slot machine that grants spins for awards provided you have the key.

That all works fine, but there’s a hefty obstacle once you clear the 10th level in that you can’t progress until you pay 5 of the premium currency (roughly $2.00 USD) or recruit a friend to play. The latter shouldn’t be a big deal–it is, after all, just one friend–but I couldn’t get it to advance even after my friend accepted. I’d chalk it up to a fluke, but plenty of others players are experiencing the issue according to the fan page. Still, it’s worth playing through the first few levels regardless of this issue if you like a dash of mellow fantasy stylings in your arcade games. Otherwise, not to burst anyone’s bubble, but there’s just not much new about Bubble Epic.