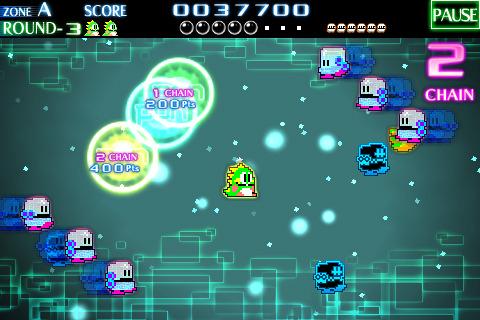 When TAITO, the publisher behind the amazing reimagining Space Invaders Infinity Gene released Bubble Bobble Double, our hearts were instantly aflutter. All the screens made it look like this could be a brand new experience that rivalled that of their earlier Space Invaders success. Looks, however, can be deceiving.

New Style offers up a wholly unique experience that seems to draw zero inspiration from the Bubble Bobble games of the past. Enemies will appear on the screen from different directions, and the player will need to tap on them to encase them in bubbles before they reach our little green friend Bub. Once captured, players will tap the bubble again to burst it and kill the little monster inside. Bursting bubbles can have chain reactions, so the real goal here is to try and get as big a chain as you can.

The waves of monsters are broken up into different zones, each of which is finished off with a boss fight. The boss fights themselves are quite ingenious, requiring you to capture different creatures and fling them at the boss as it tries new and inventive ways to reach Bub.

New Style is kind of neat, but ultimately quite shallow. For the bulk of the game you’re simply double-tapping on creatures to watch them explode. It’s a tactic that gets tired quickly. If it weren’t for the challenge of the boss fights, there’d be little here to hold your interest at all.

Classic mode – a direct port of the original Bubble Bobble – manages to simultaneously spit on the memory of this fine game while causing anyone who tries to play it some potentially headache-inducing eye strain.

Rather than offering a full screen version of the arcade classic with some time tested translucent on-screen controls, Bubble Bobble Double decides to squish the screen down to something twice the size of a postage stamp. It feels exactly like playing Bubble Bobble on a 6 year old cell phone. Unless you’re prepared to squint an awful lot, there’s simply no point in even trying to fire up the classic mode. 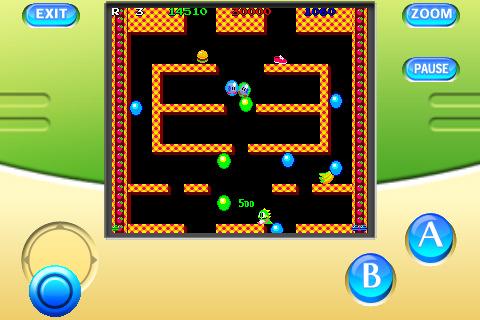 With the game screen so small, what could be taking up so much of the real estate? A faux-Gameboy, of course! Rather than concentrating on presenting the one thing everybody wants – the game – more than half of the screen real estate is devoted to presenting a less than clever background that makes it look like you’re holding a different handheld device.

Adorned on that background are a handful of buttons that control jumping, bubble firing, and movement – as well as a sarcastically labelled “zoom” button that increases the playing field by a matter of millimetres. It’s not the worst port of a classic game on the iPhone, but it’s not far from the worst either. At the very least, the controls worked fine for what was presented.