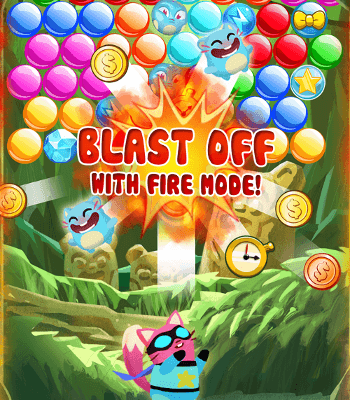 Bubble Blitz Mania is wonderful, save for its disrupting energy mechanic

The blitz formula seems to be the latest go-to design for a casual genre that’s starting to witness some flagging interest, so it was only a matter of time before it started popping up in our favorite bubble popper games. And once again, its 60 second matches appear to have done the trick. We’ve already seen bubble poppers flirt with the concept with Facebook’s Bubble Blitz, but now TeamLava’s Bubble Mania picked up the mantle with Bubble Blitz Mania, which is good news because earlier we crowned the core game as one of the best bubble poppers on the market. Even better, Bubble Blitz Mania is designed for mobile devices, which complements the quick-but-entertaining mindset behind the blitz design. 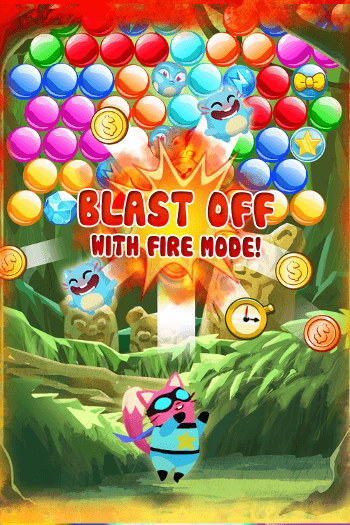 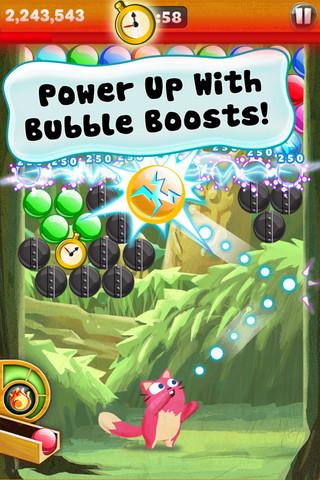 If you’ve somehow never played a bubble popper before (what with the glut of them we’ve been experiencing lately), Bubble Blitz Mania is a good place to start. The core experience is here in its entirety–from the simple mechanic of launching bubbles from the bottom of the screen to match three or more bubbles at the top to challenges such as unpoppable obstacles–and Bubble Blitz Mania brings its own brand of accessible style to the table. As with the core release, gone are the prosaic cannons in most bubble poppers; instead we have a loveable cat who flings the bubbles toward the top and a crop of buddies who utter cries of “hooray” as they’re freed from the bubbles that entrap them. It’s silly fluff, but it grants the game a lot more personality than its competitors.

And it performs its duty well. The idea here, predictably, is to pop as many bubbles as you can within a 60 second period with an endless amount of bubbles above you, which provides a nice an easy way of comparing your progress with your friends on a weekly basis over more permanent forms of leaderboards. It also benefits from five powers ups (consisting of the usual suspects such as extended time bonuses or predictable tools that let you see your bubble’s trajectory) and hidden time extensions in the bubble themselves. Much like Bejeweled Blitz, arguably the great grandaddy of the whole blitz concept, it gets addicting enough you’ll be tempted to plunk out cash for the affordable premium currency for a higher score– all without any goading from popups. 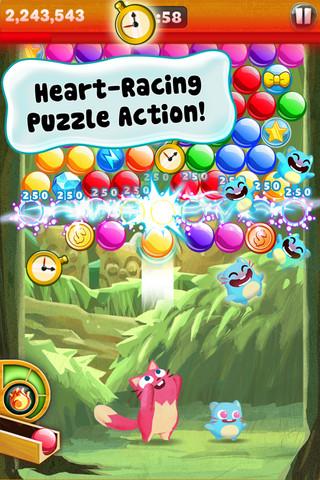 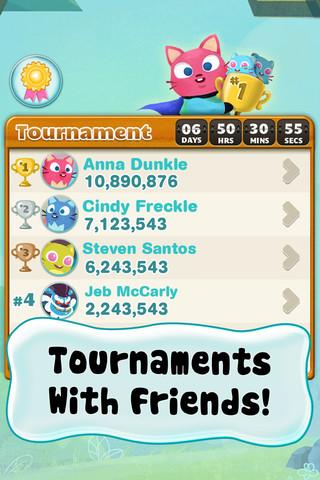 That’s why it’s so surprising that TeamLava has saddled Bubble Blitz Mania with an annoying energy mechanic that limits your gameplay after five consecutive playthroughs. As with Bejeweled Blitz, it already grants incentives for spending your cash on the powerups if you run out of the coins you’ve earned from wins, and it also asks for premium currency at the end of each round for a few more seconds of gameplay. In light of these additions, Bubble Blitz Mania seems like it would be fine without the energy mechanic, but there it is, and you’ll find your gameplay halted for 20 or more minutes if you don’t plunk out some addition energy.

It’s not a long wait, and you could credit it with giving you an excuse to get some work done, but considering how well premium currency is incorporated into the rest of the game, the decision to include an energy mechanic reeks faintly of greed. Still, as I said, it’s not a long wait, and it shouldn’t be enough to dissuade you from experiencing yet another bubble popper hit from TeamLava. I’d love to say it provides many hours of non-stop fun, but that just wouldn’t be true. Instead, it’s five to six minutes bursts of fun that you’ll enjoy, followed by 20 minute breaks that mar the experience as a whole.