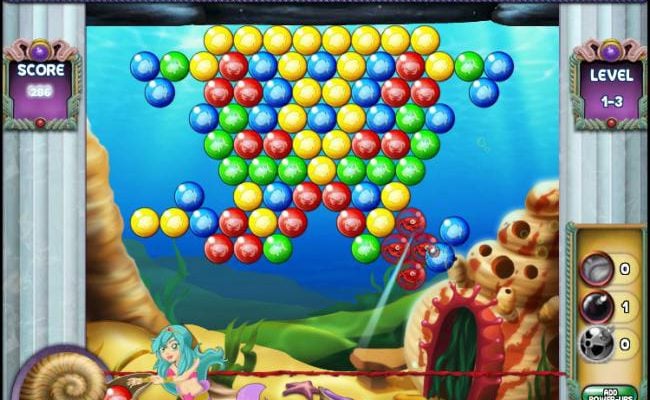 When it comes to simplistic, casual games, MindJolt is one developer that has a good chunk of experience. As such, it has brought its own variation of match-three bubble shooting to Facebook with Bubble Atlantis. A more aquatic version of wooga’s Bubble Island, the game boasts most of the same core features. Unoriginal though this may be, it’s still fun thanks to new puzzles and the occasionally different type of puzzle all together, forcing you to think about your shots in new ways.

In Bubble Atlantis you enter the underwater realm of Poseidon that has been toppled by a jealous Zeus. All of the denizens of this world have been sealed away in their own bubbles, save for one lucky mermaid. Controlling her, you must make your way through the game’s several stages in order to release everyone by matching three bubbles of a kind. Not sure why it would be three, but just go with it. 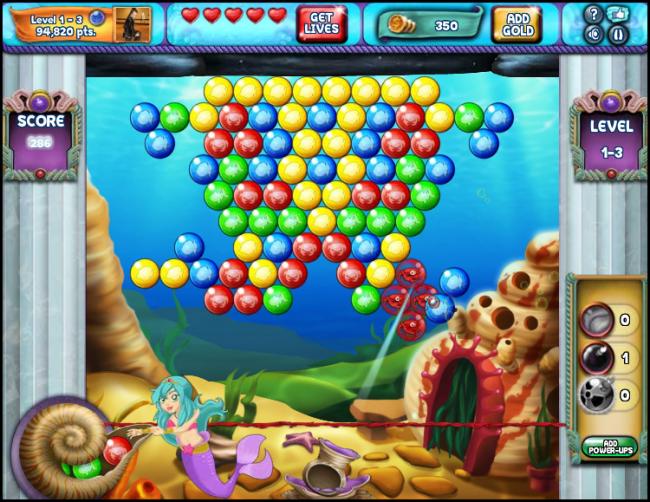 The mechanics of the game work identically to Bubble Island and similar games like Bubble Saga, Bubble Speed, and Bubble Witch Saga. You are given a layout of bubbles of varying colors and must fire randomly colored bubbles at it from a central point at the bottom. Trios of the same color will be removed from play, earning points, and any other bubbles hanging beneath them will fall as well. Every so often the ceiling of the level will descend, pushing all the bubbles toward a red line. Should any cross the line, the level is over.

With each level you complete you’ll earn up to three stars depending on your score. The more stars you earn, the more gold you’ll accumulate. This is then used to purchase various power-ups that will come in handy during later levels. Examples include the chameleon ball that will match with any bubble, the explosive ball that destroys a radius of bubbles around it, and an extra time ball that will partially raise the ceiling. The only real difficulty from these standard puzzles comes from trying to ricochet bubbles off the walls. Thankfully, MindJolt knows this and has added in some interesting extras.

One extra puzzle involves bubbles attached to a center point that will rotate based on where you shoot. The idea is to remove all the bubbles in a limited number of shots. Another is a very cool pulley-type of game where bubbles are attached to what is essentially a scale. As bubbles are shot at on one side, it will gain more weight (losing weight if some are removed), thus raising or lowering one of the two pulleys. Should either one cross the red line, the game is over. The last is a little dull comparatively, and simply involves playing the basic game with a moving obstacle in the way. 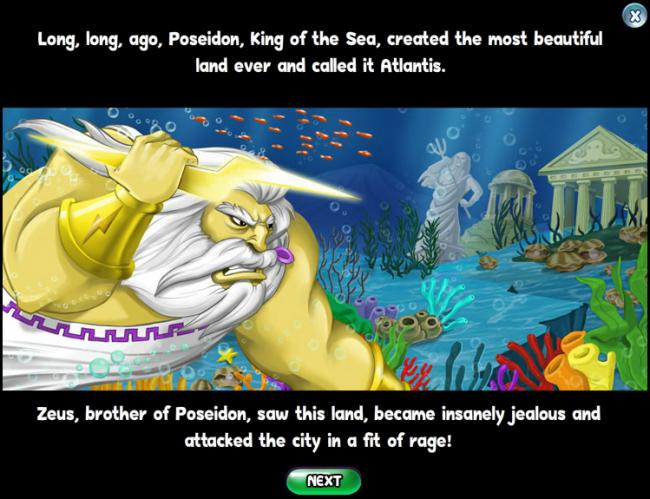 From a social perspective, Bubble Atlantis is pretty basic. Since the app is centered around casual game design, the core addictiveness factor is earning high scores. Because of this, the only real social mechanic is being able to see the level scores of all your invited friends and occasionally sharing accomplishments through your Facebook social feed.

Beyond this the presentation is about what you would expect from a company like MindJolt. Bubble Atlantis has a high quality, colorful art style and a sound design that works well with the upbeat mood of the game. On the negative side of things, the animations — including those for shooting the bubbles — feel very fast and unnatural. This actually makes shooting sometimes awkward to aim, especially when using bank shots. It’s not a huge deal, but players of similar games will likely notice a slight difference.

All that in mind, Bubble Atlantis makes for a pretty fun game, even if its core play is far from original. It adds new puzzles and some new ideas to a well-worn formula. If you are a fan of games like Bubble Island, there is no real reason you would not enjoy Bubble Atlantis.