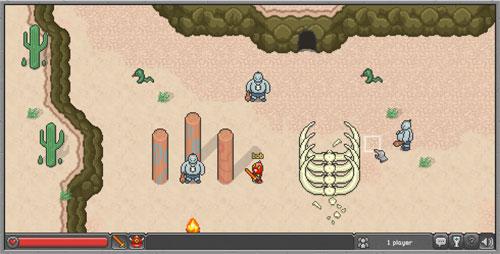 Want to see what HTML5 can pull off? Check out BrowserQuest

Mozilla’s BrowserQuest may look like a seemingly simple retro RPG in a web browser, especially compared to some of the stuff already out there. However, this particular game has a rather notable purpose that may not sound all that exciting to the average gamer, but for developers, it’s quite the eye-opener.

BrowserQuest is written entirely in HTML5, the programming language that allows for games and apps to be utilized via a wide variety of web browsers, including those accessible via iPhones and iPads. Compare this to Flash-based games which can’t be played on iOS devices, and you begin to understand why it’s the next important step. The game itself is a pretty standard affair, but it gives us hope for the upcoming platform.

After entering your name and hitting Play, you’re transported to a world that looks rather similar to RPGs of old, most notably the Legend of Zelda series. From here, you can point your mouse cursor and click anywhere on the screen to make your hero run around, slash enemies and explore the surrounding areas.

There isn’t really a set goal to BrowserQuest, or at least, you aren’t given any real guidance on what you’re supposed to be doing. Rather, the game points you towards a list of 20 achievements you can aim to earn, and tells you it might be a good idea to start there. Through completing these achievements, you’ll bag yourself better weapons and armor, and battle tougher and tougher enemies.

The whole game is set in a world teeming with other online players, so as you run around, there are other people who are also on their own little quests. You can’t interact with these people apart from using chat and hitting the same enemies they are, but it’s a nice show of what HTML5 can accomplish, and if you can manage to connect with a friend, you can always run around together and pretend you’re on a team.

That’s everything there is to BrowserQuest. The dialogue and visuals ooze with personality, from the silly things that NPCs will say to you, to the various Easter Eggs you may find from other video games such as Super Mario and Portal. It’s also a fantastic display of HTML5’s capabilities, and if you’re a developer, you’ll no doubt have your confidence boosted in the platform.

The game is, however, very short and basic, and you won’t find yourself playing for too long. It’s possible to complete everything there is to see and do within 10 to 15 minutes if you know what you’re doing, and the lack of a levelling up system means there isn’t really any way to track your progress other than the achievements.

There are also issues with the rudimentary browser connection. We had issues connecting at all to the game through one computer on any web browser, and only managed to get into the game after switching to another computer and trying a specific browser.

There’s also the simple nature of the naming box, which allows users to call their characters anything they desire. A number of times we spotted people with very rude and graphic names, and the chat is also not censored – if you’re a parent, you may want to watch over your child as they play BrowserQuest, just in case.

BrowserQuest is a great step forward for the HTML5 platform, and we’ll no doubt see many more games developed off the back of its success. As a game, it could have done with a little more meat on its bones, but as a tech demo, you can’t really fault it.