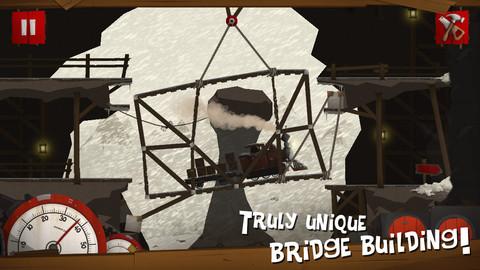 This train is not bound for glory.

“If the gameplay resonates with you” is one of the more maligned phrases in game reviewing. It’s a cop out, like defining a word using the same word; but in some cases, like this one, it’s just unavoidable. So, if touch-based bridge building resonates with you, then you might like Bridgy Jones.

Full disclosure: I’m not a huge fan of bridge building games. I liked World of Goo for its style and music, and I didn’t make much headway in Elefunk. I didn’t play either of those titles wishing for touch controls, but more importantly, I certainly didn’t spend my time with them wishing they were more picky or less approachable. I’ve never hit a wall in an iOS title so quickly as I did with Bridgy Jones; that is to say, instantly. Maybe I just need to be wined and dined with better frame narrative and cut scene art (or real voice work) before my structure crumbles into the ravine.

Bridgy Jones could have easily had players plug their construction materials into silhouettes of their choosing, but these planks and track sections aren’t even standard sizes. Using your finger, you draw your building block from one joint to the other, which should more or less be an automatic process, but no. You can (and probably will) completely overshoot the joint with your finger, leaving a chunk of your beam arbitrarily sticking out beyond the vertex. It’s bizarre and even jarring that it doesn’t “just work.” Bridgy Jones demands precision, so much so that there’s an ever-present magnification window turned on the end of the board you’re working with, because how else are you going to judge what’s going on under your finger? For asking so much, Bridgy Jones provides no tips whatsoever toward creating more stable structures.

Bridgy Jones consists of around 30 levels, which each have several bonus objectives like finding collectible objects or preserving all the crates on your train. The latter, if you’re somehow motivated to take it on, will really test your patience as you gingerly move your train along the track, praying the physics system doesn’t interpret the next bump as very significant. To top it all off, one of those bonus objectives is completing the stage in under a certain time, because nothing is begging for a time trial like a physics-based puzzler. 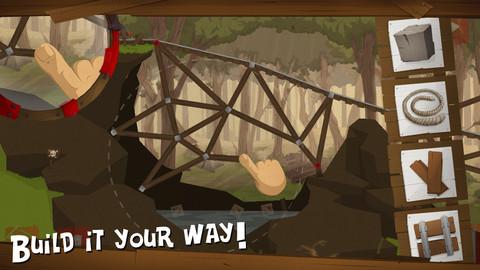 While the choices made regarding Bridgy Jones‘ editor might be questionable, there’s no question that all the parts are there, and that it works if you’re willing to put the time in. The more basic problem is that there’s nothing here to motivate you to put in that time, and even if you do decide to, the game isn’t long enough to justify the initial commitment. Bridgy Jones also makes the mistake of locking away its best music, art, and gameplay in its few bonus stages – stages that are only accessible after high performance in the standard puzzles.

Most iOS games are good for about ten minutes, and then immediately deleted. But Bridgy Jones is at its best hours later, with little charm to hold you over until then. If you’re a fan of the genre, this is probably for you; but if you still need to arrive at that station, well this train don’t stop there anymore.