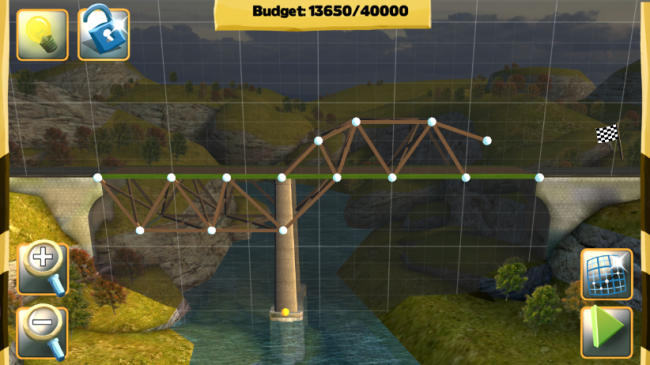 London Bridge is falling down AND IT’S ALL YOUR FAULT

Bridge Constructor by HeadUp Games is a bridge-building mobile game that lets you exercise your physics prowess. It also offers a strong, important reminder: Not everyone is cut out for building bridges. It’s OK for a bridge to fall apart on your screen, but in real life, smiling sheepishly and shrugging while cars plummet into ravines simply isn’t acceptable.

So, if you don’t know anything about engineering, is it still worth giving Bridge Constructor a go? Sure it is. The game challenges you to build serviceable bridges. There’s no need for them to pass any hoity-toity government inspections. If the whole shebang collapses but the cars driving across manage to outrun the destruction, the point’s still yours. No jail time!

Each level of Bridge Constructor offers up a gap that must be bridged (it turns out an earthquake has shaken all the world’s previous bridges to dust). Your supplies include concrete gates, girders, cables, and plain old wood.

How you position the materials is up to you, but there are some important rules to keep in mind. First, your bridge must be stable enough for cars to cross over, though you’ll get bonus points if trucks manage to make it over. Second, not all the materials are open to you in every stage.

Third, and most important, you have a budget that needs to be followed, so you should probably scrap your big idea for that multi-level steel bridge that looks like something out of an anime about mecha.

The more bridges you build, the trickier success becomes. Budgets shrink, and gaps widen. Moreover, you need to find creative ways to support bridges that lack columns for safe, secure middles. There comes a point when simply pressing “go” on the action causes a poorly-constructed bridge to buckle of its own accord before the cars can even touch it. 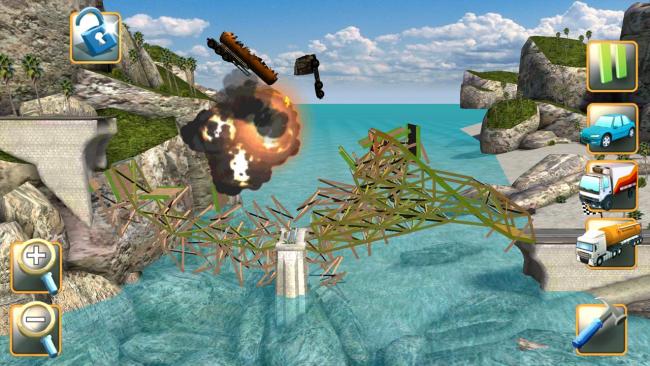 Bridge Constructor is tricky, but it’s accessible for (ahem) engineers of all skill levels. There’s more than one way to build a bridge (at least in the virtual world), and it doesn’t matter if your constructions are creaking, swaying abominations that would give an acrophobic the screaming horrors. As long as the cars make it over safely, you’re golden.

Of course, if you’re capable of building bridges that allow trucks to rumble over a river with everyone safe and accounted for, you’re rewarded accordingly. This additional shot of challenge gives Bridge Constructor a second life, should you choose to pursue perfection.

There is one sizable crack in the game’s foundation, however: Its hint system. For a single coin, you get a hint on how your bridge should be built. For two coins, you get the solution to the entire puzzle. Hints cost coins, which must be purchased after you’ve blown through your initial ten.

Amateurs that really want to learn how to build decent bridges (and not just boards nailed together) might find themselves frustrated at the idea of paying to learn, especially since Bridge Constructor‘s tutorials don’t go into much depth about what works and what doesn’t.

But there’s nothing wrong with a little trial-and-error, especially where bridges are involved. Get to it.