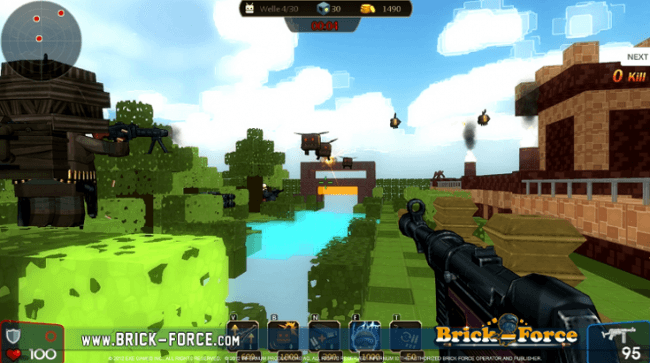 Brick-Force is a browser-based and/or downloadable first-person multiplayer shooter that has been doing the rounds for quite a while now. In more recent months the game’s popularity has really picked up pace, especially when it launched via games portal behemoth Kongregate last month.

Here’s the thing about Brick-Force: It’s well-designed. It’s fun to play. It ties the blocky, creative world of Minecraft together well with that of a regular hard-on-the-trigger FPS title. And yet it doesn’t really do anything we’ve not seen before, and feels completely forgettable afterwards.

From the get-go, it’s obvious that Brick-Force is keen to lay on the huge number of customization options, creative avenues and available levels that it houses. This is a game that cannot possibly be accused of providing too little content – and with the ability for users to work together to create levels and then upload them to the Brick-Force community, there’s no sign that the level of content is going to diminish anytime soon.

But first, let’s talk shooting. Brick-Force‘s gun action is appealing because it’s so simple and familiar. If you’ve ever played an online shooter, you’ll know exactly how it goes here – aim, hold down left mouse button, wait until enemy is dead, move on. Different weapons can be switched to, and special items like turrets and jetpacks aim to mix the action up here and there.

As a means of giving you a little more direction than simply “kill people,” there are daily challenges to beat such as “kill 50 people will this type of weapon”, a levelling system that sees you unlocking customization options, and clan formation so you can take on other clans. So far, so first-person shooter.

There’s no denying that Brick-Force ticks plenty of boxes. The various types of maps mean that games can be wildly different – sometimes you’ll be battling in close quarters, and elsewhere you’ll be sniping across ravines. Then you’ll be jumping into a turret, aiming at open doorways and waiting for silly new players to keep respawning and walking into the path of your killing machines over and over again. Mwa hah hah.

The other half of Brick-Force is the world building. You can jump into a server and build whole maps brick-by-brick, very much in the same way that you might with Minecraft friends. Then you save the map, invite more people in and start shooting the ding-dong out of each other on your freshly mown battlefield.

Building levels is simple enough too – it’s literally a case of using the mouse scroll wheel to choose the type of block you want, then clicking to place it. It’s all done in the regular first-person view, and putting a world together with friends feels very communal.

Can you sense a “but” coming? Here it finally emerges: While everything that Brick-Force does is good, it’s not exactly new, innovative or even that exciting.

Take the actual team-based shooting, for example. There are already hundreds of games that do it just as well, if not better. Sure, Brick-Force has the “it looks like Minecraft” edge, but then again, we’ve even got Minecraft-like multiplayer shooters readily available (see Ace of Spades, for example). That’s not to say there’s no space left for more of these types of games, but in such a diluted genre, you really need to do more to separate yourself from the competition

Even the world building isn’t that brilliant. Simple map editors such as the one featured here have been around for decades, and map editors where you can build alongside friends and then share with the world aren’t anything new either. The map editor supplied with Brick-Force is good and all, but so are hundreds of others too, and nothing here really caught my eye or made me double take.

Brick-Force isn’t so well crafted in all places either. The shop allows you to purchase everything from guns to accessories to clothing, and some of these actually give you notable advantages against other players, which seems hugely unfair – it basically makes Brick-Force a “pay-to-win” game. 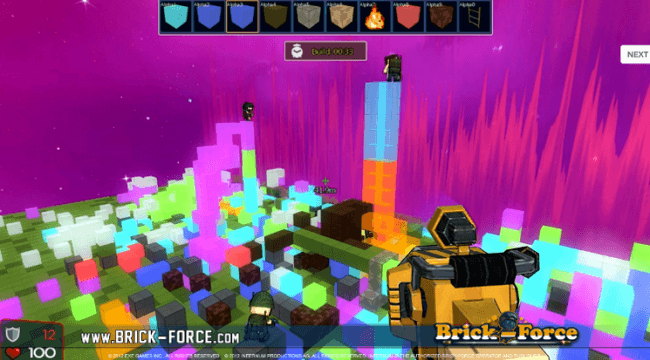 And this is without mentioning the fact that there are three different types of virtual currency in the game. Three! And each is earned in a different way. Hence, before you buy an item you have to check how much the item costs in each currency, then decide which to spend to purchase it. This is most definitely too much hassle for a more casual player, and I can’t see myself ever getting truly invested in purchasing new stuff for my character when the shop is such an eyesore.

What it all boils down to is this: Brick-Force is a good multiplayer shooter, perhaps even a great one, and you’ll no doubt have some fun with it if you give it a try – but we already have a ton of great multiplayer shooters. Brick-Force may be gaining traction now, but once the next good shooter for browsers comes along, it’ll no doubt be forgotten as quickly as it’s being picked up.