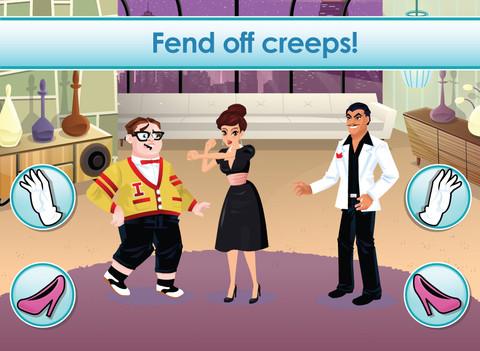 Breakfast with Tiffany is fun, but you probably won’t want to stay for lunch or dinner.

If you were born sometime past 1980, you can be forgiven for only knowing the classic film Breakfast at Tiffany’s through Deep Blue Something’s hit song. Regardless of your age, it’s worth picking up the original Breakfast at Tiffany’s novel or watching the movie; the romantic comedy showcased actress Audrey Hepburn in what many consider to be her finest role. But even if you’re not in the mood to crack open a book or burrow into a film, you can still enjoy the Breakfast at Tiffany’s Broadway reflex game for iOS. It’s a one-note app that obviously exists to advertise the Broadway show, but it’s earnest and hard to hate.

Don’t expect the novel or movie’s complex and humorous character interactions when you download Breakfast at Tiffany’s Broadway: This title’s concept is as bare-bones as its gameplay. You take on the role of Holly Golightly, a New York café society girl who just so happens to be hosting a party. However, the doorman for Holly’s building doesn’t seem to be good at his job, since all sorts of undesirables have somehow managed to crash Holly’s party. Holly needs to turn away these “Rats,” but she also needs to be careful not to hit her beloved Fred (who seems to be the only wanted guest attending this shindig).

Holly’s basic defenses include slapping and kicking on either side of her. Some of the Rats can only be driven away by a specific attack. You can slap a hobo, but you can’t kick him, while gangsters will only be deterred by a kick to the shins. Holly’s admirers approach in waves, and they move faster and faster as the party goes on. You need to act fast when the Rats really start sliding in, which makes it all the easier to accidentally bean poor Fred when he arrives to deliver a present.

Fred’s presents can come in handy for driving away the Rat-herd; perfume keeps them at bay, while the valuable tabby cat drives away Rats with a hiss and a yowl. As Holly accumulates points, she unlocks achievements that materialize as new outfits. 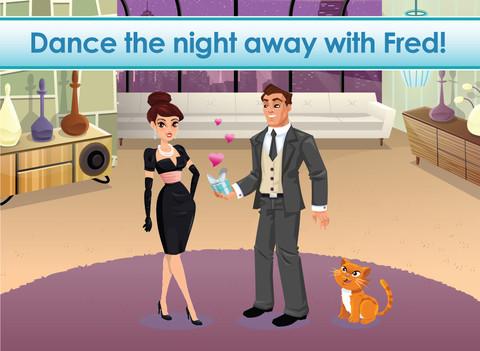 Breakfast at Tiffany’s Broadway is kind of silly, and you’re not going to play it for more than a few minutes at a time before you put it away. That said, the whole package is pretty cute. The Rats gyrate and shimmy as they approach (the gangster is particularly talented at moving his hips), and Holly herself never stops dancing in between the slapping and kicking. Moreover, Holly’s stylish outfit upgrades are a fun way to measure your progress.

Breakfast at Tiffany’s Broadway has a couple of built-in links that tell you more about the Broadway show, and help you look for discounted tickets. Again, the game doubles as an ad for the production, and it feels like the app ought to be free for that reason. Regardless, you probably won’t be too upset with the price tag if you’re a fan of the book/show and you’re in the market for a cute distraction. Just don’t expect anything as stunning as Hepburn’s performance.