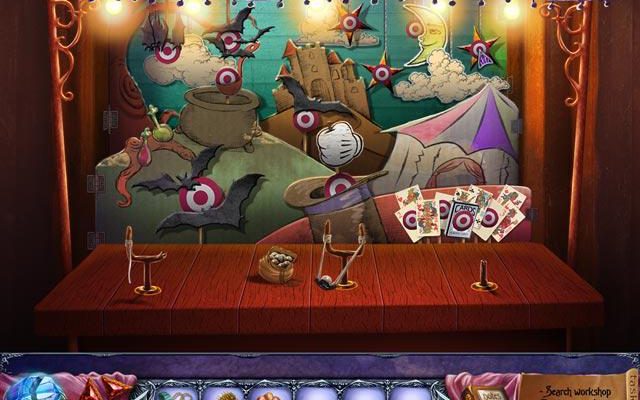 When you mix an adventure game with good old fashioned Dark Age lore, you’ve got a recipe for a captivating game. Break the Curse: The Crimson Gems lays on the story and atmosphere in heavy strokes, filling you with both fear and awe as you pursue a sorceress who has kidnapped a pair of local performers. And along the way, you’ll find out just how good you are at mini-games!

A simple note kicks things off, with pirate/miscellaneous bearded guy Lorenzo summoning you to his caravan in the local carnival. It seems two of the circus folk have gone missing, and Lorenzo suspects local crackpot and suspected witch Abigaile is behind it. Since you’re apparently well-known for your supernatural investigative abilities, the job is a natural fit, so you head to Usherton Manor to see what’s going on. 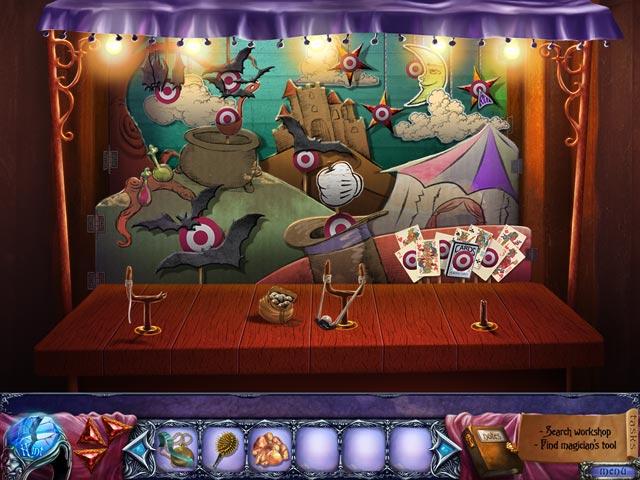 Stepping inside the grounds you quickly discover the “witch” is more like a card-carrying member of the elite sorceress club. She tries to turn you into her next victim, but your magical ring deflects her spell, shattering her pendant and sending the sorceress fleeing through the manor. Picking up the shattered gems, you’re finally beginning to piece together what’s going on here. And it’s more than just a crazy lady with a lot of birds in the aviary.

Break the Curse: The Crimson Gems sticks to the adventure game format with plenty of locations to wander through, examining things for possible puzzles and picking up clues behind every leaf and curtain. You’ll find seemingly random objects that keep quite nicely in your inventory until they’re needed. Be prepared to do a little backtracking as the number of open areas to explore grows larger. It’s all pretty logical in nature, so you don’t have to worry about coming up with unusual solutions to proceed, like picking a lock with a butterfly or prying open a grate with a really thin piece of stale cheese.

Mini-games are everywhere in Break the Curse, arguably becoming as much of a focus as adventuring and puzzle solving. They’re all very well designed, feeling like a collection of classic logic puzzles sprinkled throughout the game instead of time-wasting diversions. They also fit the setting quite well; you can just imagine Abigaile locking her doors with a rotating tile puzzle. Even if you’re not in the mood to solve a pipes puzzle, a skip timer allows you to automatically complete any mini-game with a single click, both in casual difficulty and challenge mode. 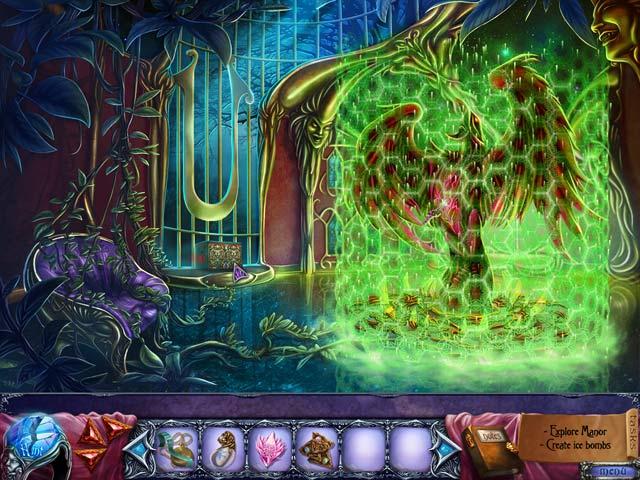 There are technically a few hidden object scenes in the mix, but they’re so small and short they don’t really count towards changing the genre assignment. Instead of lists of items to find, you just pick up a number of certain things, like gems or valves and the like, then use them as inventory items in the main game. Just another mini-game, really.

The storyline in Break the Curse is riddled with twists and turns, keeping you honestly interested in the outcome of each event. This is no standard witch/kidnapping setup; it’s a saga of classically supernatural proportions. Strangely, though, the dialogue is often clumsy, both the written word and the voiced lines. It’s a little shocking at first, seeing as how the game itself looks and plays professionally, but soon you’ll be so engrossed in the story you wouldn’t care if the characters sounded like Gilbert Gottfried singing a Yoko Ono song. 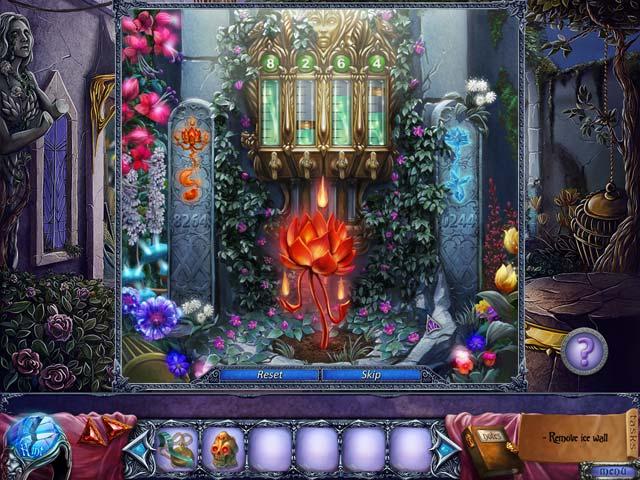 Combining great story ideas and a rich setting, Break the Curse: The Crimson Gems is a winning experience that will draw you in from the start. Smart puzzles and highly entertaining mini-games keep your brain nice and limber, making sure you’re ready the next time that sorceress tries to cast a spell on you.