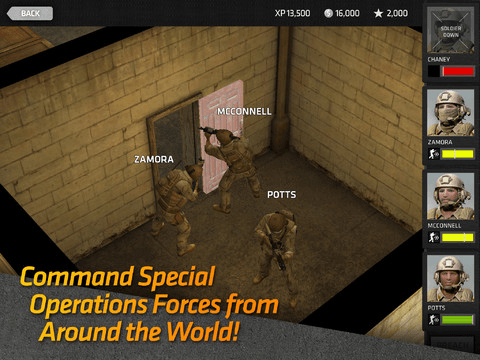 Mobile gamers are used to seeing the occasional “Coming soon” message. A precedent made famous by the Angry Birds series, mobile developers have developed a tendency to tease future updates by leaving un-selectable options on the menu with a “Coming soon” notice attached. Breach & Clear is a shining example of what happens when teasing future content is taken to a new level, leaving behind a half-finished game that isn’t all too fun to begin with.

Breach & Clear‘s gameplay is a squad-based tactics experience, in a similar style as XCOM: Enemy Unknown. However, this is no XCOM. Each mission goes from assigning a squad of four soldiers to doors, to breaching the doors through various tactics, and clearing the objective. If you’re a fan of variety and an occasional curveball, the basic gameplay isn’t going to do much for you. If you love doing the same thing over and over for fifteen missions, you’re in luck.

That’s not to say Breach & Clear is necessarily easy. There are a few difficulty levels, and the “normal” setting will provide the ideal amount of challenge for most players. The issue is that the gameplay doesn’t necessarily care about difficulty. When a room is left unoccupied, a fog of war somewhat covers the area. When barging in, you can point troops in the direction you want them to face, and they’ll shoot any enemies they see. Offense frequently boils down to a “move and shoot” mentality, with limited control over shooting. There are items that can be used, and slight tweaks that can be made, but nothing that changes the flow of the game.

Currently, the only game mode in Breach & Clear is “Terrorist Hunt,” where the objective is to simply kill all enemies. This wouldn’t be much of an issue, but there are two other game modes listed as “Coming soon.” With “Hostage Rescue” and “Bomb Defusal” off in the distance, it’s easy to wonder if those modes would offer the variety needed to keep this game interesting. To make matters worse, there are currently fifteen Terrorist Hunt missions available, out of a likely 25, as only three of five locations are currently available. The others are coming soon. 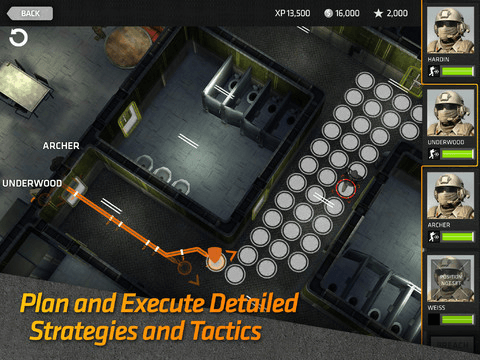 Despite the problems, some players will love the depth of customization found in Breach & Clear. There are four squads to unlock and fully customize. Each character can have a specific role assigned, and different stats can be improved as they level up. The game’s shining star is the amount of gear that’s unlockable. There’s a ton of guns, attachments, helmets, camouflage, and consumable items that all influence a soldier’s stats and try to change the way the game is played. While the tactical influence is minimal, players who love unlocking guns and equipment will find no shortage of goodies. Although, body armor is coming soon.

Breach & Clear is a game that does a lot of little things right, but once the gameplay hits, almost all of that is thrown out the window. The customization alone may be more than enough to keep some players invested for a short while. On the other hand, the bare-bones gameplay will be a huge turn-off to both hardcore strategy fans and users looking for a new mobile game. Perhaps the “coming soon” content will be enough to drastically change the game, but it’s hard to imagine such a scenario.