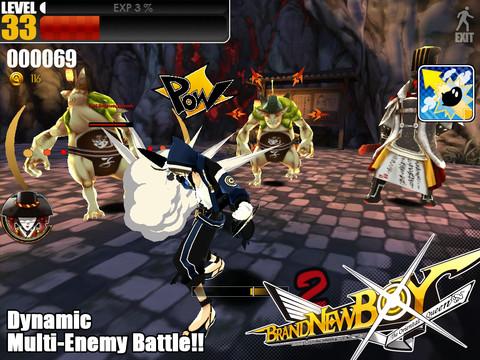 Scramble some eggs in this beat-em-up

One of the major problems facing iPhone 3D games is the issue of movement. Some games have tried to superimpose buttons and joysticks on the screen, which in my estimation is a terrible way to try to navigate game space. With Brandnew Boy, developer Oozoo has come up with an elegant and surprisingly effective way to move—unfortunately, that is about the long and short of what is good about the game.

In Brandnew Boy, you will be controlling an amnesiac that for whatever reason has to kick the ever-loving tar out of eggmen and other baddies. He’s guided by what appears to be a TV along the way. There is a story here, but within the first few lines of dialogue there is a grievous grammatical error that sets the tone for the rest of the game’s plot. You’ll be safe to just skip through it and save your brain cells.

The game is set up in stages, which you are ranked on a medal system based on how fast you complete the stage and how much damage you take. Each stage starts with some dialogue between the boy and the TV before it starts proper and you run around kicking and punching bad guys in the form of eggs that can shoot rockets at you and punch and kick back.

Combat is a fairly straight-forward affair. When the egg people come into view, you tap on one of them which launches your character forward into a dramatic jump kick to the face. After you’ve supplied a nice helping a foot to the face, you follow it up by tapping on the enemy until it is dead. There is a meter that flows across the screen where you can hit for more damage, but for most levels it is not necessary. You can simply tap away at the screen and demolish your foes with little to no thought. The only strategy I had to employ later in the game was when enemies would start to swarm—you can see an exclamation point buzz over enemy attackers when they are about to strike. Simply change your target and you’re in the clear.

So, from a gameplay and plot standpoint, there’s really not a lot to write home about in Brandnew Boy. However, as previously mentioned, the game has a surprisingly well done control mechanism to navigate in 3D space. Tapping on the screen makes your character move forward, and swiping horizontally will allow you to move left or right. It works extremely well, and is one of the better games on the market that I have played in terms of simply getting from point A to point B. It is surprising that, even after all this time, mobile game developers still struggle with best practices in regards to game movement. Brandnew Boy gets it right.

Unfortunately, an innovative and well done approach to movement is only one part of the puzzle to making a good game, and Brandnew Boy is missing almost every other element. If you want a Dynasty Warriors style mindless action game, perhaps you should give it a go. Otherwise, just be on the lookout for other games that implement this movement scheme with a better game behind it.