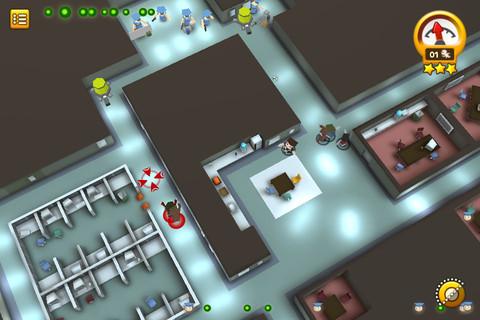 Like the invasions they so lumberingly spearhead, zombies have sowly but surely taken over pop culture. Yet whether it’s in movies, video games, or on t-shirts, you most often find them in the same place: on the receiving end of death and derision. Looking to turn the tables, developer duo Lonely Few have given us Brainsss. Or at least, a way to eat some.

The company’s first iOS outing, Brainsss puts you in control of the proud, the few, the reanimated dead. Like vacuum salesmen or scientologists, however, you have ambitious plans for expansion. Except they don’t involve door-to-door sales. Using the touch screen, players corral their starting party and send them strategically into the human fray, emerging if they’re lucky with more zombie pals to show for it.

Like a tactics-infused Pac-Man, Brainsss has you mixing divide-and-conquer maneuvers with full-on rushes to corner and convert the unwashed masses. Or is that convert them to unwashed masses? Either way, the game that results is all at once engaging and frustrating; a clever experience built on a solid foundation mired in niggling design choices.

The world of Brainsss had me at hello, with Lonely Few’s previous experience on AAA titles shining through immediately. Each level is an exercise in expertly done lighting on iOS; what in less capable hands might have been barely recognizable environments shine here as vibrant 3D dioramas of classic B-movie attack zones: the library, the parking lot, the barred-off suburban street. Add to that blocky mini-sprites dotingly adorned with features that set them apart from one another, and Brainsss makes you feel like you’re conducting a mindless onslaught inside the game of Life. The world’s cutest zombie outbreak by far.

Refreshingly, the gameplay also feels right at home on phones and tablets. Taking control of your corn brain-fed legions, moving on a group of humans, splitting up to corner your last victim. Nothing takes more than one swipe or touch input, meaning you’ll quickly know the ropes and start to feel like a puppeteer in your own zombie apocalypse. Moreover, a varied set of goals in each zone (turn all humans, turn just the scientists, survive the soldiers) adds on-the-fly strategy that will scratch the tactics itch without turning away casual gamers.

Scratch too hard, however, and you start to peel away some of the game’s friendlier layers to reveal flaws in design. You see, each level is crafted with a bonus in mind, rewarding you with stars and premium currency for perfecting your conversion skills to an art. Faced with some dauntingly quick times or high survival goals, it becomes clear that the controls in Brainsss just aren’t versatile enough to allow for much nuance or improvement.

They don’t prevent you from having fun and trying out tactics here and there, but anything more than that and roadblocks spring up fast. Most of the best plays in the game rely on cleverly “splitting” your zombies into two groups with the touch of a button. Immediately after the deed is done, managing both groups becomes cumbersome at best, however.

Because zombie destinations are created one tap at a time, splitting your zombies to chase a group of converts almost always leaves you forgetting to “update” the desired location of your other group. By the time you remember? The fresh meat is already escaping, and it would be easier to reset the level than regroup if you want to set that record. Had Lonely few allowed for a path drawing system and individual enemy targeting, that would have gone a long way towards solving Brainsss’ biggest problem: an inorganic difficulty curve. The unfortunate byproduct of which is the slimy feeling that the game’s in-app purchases – which improve speed, attack, and health for a given level – are necessary to be an expert. 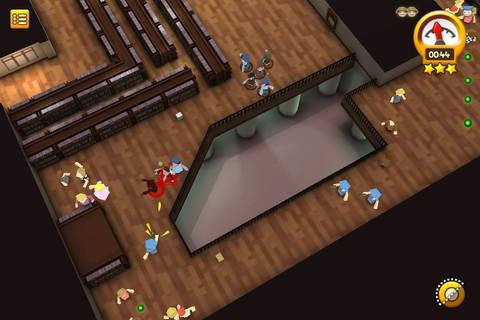 As you can see, there’s more here to like than there is to lump, and with the promise of more levels to come, I’m holding out optimistically for tweaks to gameplay as well. Like the zombies themselves, the fun here sneaks up on you, and before you know it you’ve been bitten in the neck and are bleeding helplessly on the ground. “Somebody! Somebody help! I’ve been…wait…what’s that strange feeling. I’m…hungry? I have an intense craving for…Brainsss.”