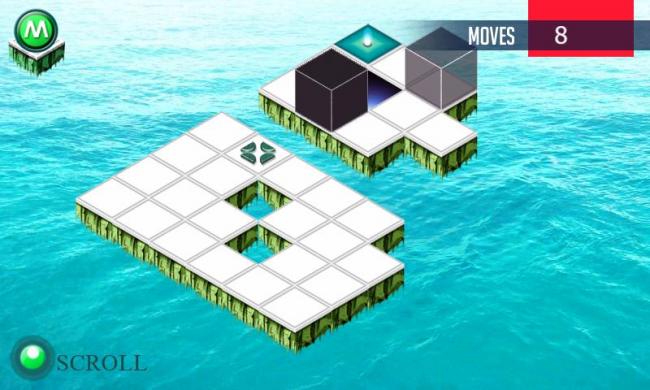 Imagine, if you will, that Mobigame’s successful cube-rolling puzzler EDGE featured a cuboid instead of a cube. Doesn’t sound all that mind-blowing, but then again, Brain Cube isn’t really aiming to make you sit back in awe. Rather, developer XIMAD wants to provide you with a relaxing way to make the daily commute fly by.

For the most part they’ve succeeded delightfully, with a soothing soundtrack and some clever ideas. It becomes obvious early on that, technically, most levels can be completed with trial and error – but there’s still plenty to wrap your brain around.

On each level you’re looking to roll the cuboid around a maze and push it through a hole in the floor. The shape rolls in a very specific way, always taking up either one or two spaces, and therefore must be rolled into a particular position before it can be successfully posted through the gap.

This usually involves making use of the surrounding level, be it rolling around a section of corridors to gain that extra space or two, or rolling around on the spot to get the base of the shape into the correction alignment. There are some pretty clever ideas at work, and getting your head around how it all works is effortlessly enjoyable.

Score is rewarded based on how many moves you make in getting to the finish – the less times you roll the cube, the higher your score. It’s strangely satisfying to complete a level in the minimum number of moves and collect your 1000 point price. In fact, you can even beat levels in the ways that the developers didn’t fathom, and collect even more points that the maximum 1000! Finding these routes is hugely rewarding and makes you feel very good about yourself.

There are a number of interesting elements introduced throughout play, with the likes of collapsible flooring and buttons making extra panels appear, giving the game extra twists along the way. It’s clear that a lot of thought has been put into keeping the concept fresh, and the game feels so much stronger for it.

It’s also well presented, with clear menus and controls abound, and soothing environments and music to keep you chilled out even when a particularly difficult level is giving you problems. 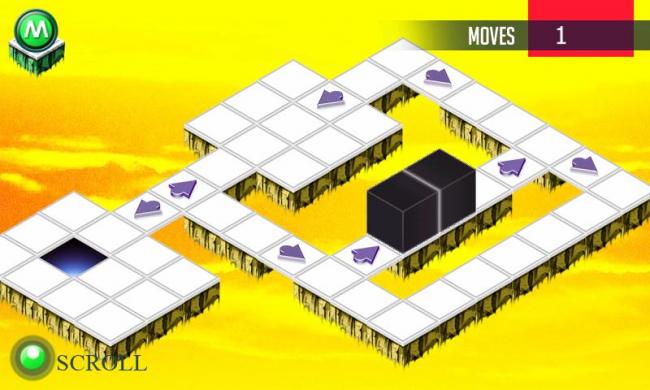 The main problem with Brain Cube, however, is that the way the game is laid out means that any level can be completed solely with trial and error. Since levels are restrictive and only allow for specific movements in specific directions, you can simply throw the cuboid around the available spaces, and you’ll eventually find the correct method for winning. This really does take away from how clever the game makes you feel. When you can complete a level faster by just swiping your finger around randomly, it really takes the edge off.

Those who take their time and really think Brain Cube through will enjoy it immensely. It’s a great puzzler for picking up and playing at intervals, and will make you feel like the cleverest person in the room.