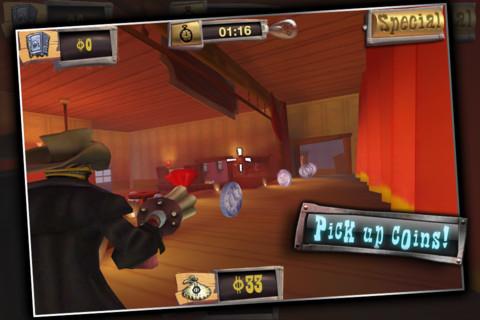 If you’re anything like I am, online shooters get overwhelming. There’s so much to balance, from the constantly chastising pre-teen teammates to the picking the right class and managing inventory–not to mention that whole shooting thing. So when I opened up Bounty Bots, I had the expectation that I’d be blown away. I was, but by the excellent game rather than by my opponents (ok – by my opponents too, but that’s not the point).

From the fine folks at MunkyFun comes Bounty Bots, a free-to-play online shooter that pits players against one another in a six-person free-for-all. All players will be scrambling across a plain of the wild west as they hunt to grab, deposit, and collect as many coins as possible. The reason that these coins are so sought after is for their worth: They’ll act as a score as well as money that will allow players to upgrade their weapons and score new outfits, because nothing is more important than being fashionable in a wasteland where you’re attempting not to get killed.

Perhaps the most interesting part of Bounty Bots is its gameplay. The game is, by definition, a shooter. There is no denying that picking off enemies is an important aspect of the game, but what is interesting is how small a part of the game it can be. Shooting others isn’t as primary as a function of the game as avoiding getting shot.

The game is mostly about collecting coins. Shooting factors into this, because popping an opposing player with a shot will knock coins out of them. Killing them will drop their score down to zero. The same goes for you, which is why not getting hit is just as legitimate of a strategy as hitting others. Preserving your coin count long enough to make it to the nearest bank and make a deposit is the main goal. And you’ll want to deposit as much as you can at one time. Putting twenty coins in the bank earns you two free coins. In contrast, zapping an enemy will land you five coins, but you’ll have to hold them tight until a bank is in sight. Either way you play, be it aggressive or cautious and stealthy, you’ll have fun. 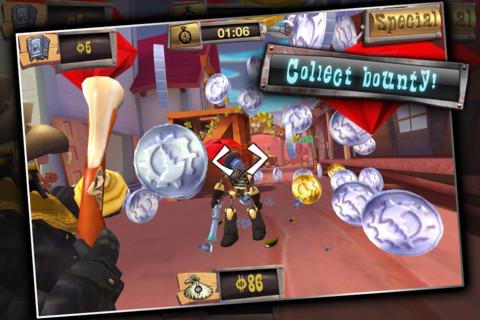 Like any shooter, you’ll find your own preference as you play with different weapons and figure out your preferred way to play. Get up close and blast away with a shotgun or stand behind cover and pick people off as a sharpshooter. The variety of gameplay is nearly endless – and the fact that Bounty Bots offers a plethora of ways to make a match exciting is perhaps its saving grace, because there is only one map. The developers at MunkyFun promise more content in the future, but for the time being they’re banking on the fact that their game is just plain fun to play. Honestly? It’s working.

The Wild West environment is countered nicely with some futuristic, robotic character models. The weapons all sport a very techie look to them, modernizing favorite weapons and outfitting them with some crazy skins. It’s a fun contrast to see, and conjures up memories of games like Timesplitters 2, which featured imaginative characters and weapons placed in classic environments. It definitely looks better than those throwback titles that it draws influence from, and the visuals are crisp on the Retina display.

For a free-to-play game that tackles a difficult genre, Bounty Bots does a lot of things right. It is successful in its goal of making the shooter genre focus as much on the rest of the gameplay as it does on the shooting. It provides a lot of options in ways to play despite only having one game mode, and it delivers some good looking visuals that make it fun to upgrade your character and grab a new outfit or two. While the strength of the game is variety, it’s also its downfall. With only one map at launch, it can get boring to play the same landscape over and over. Not to mention some people discover their favorite spots and refuse to leave. When more content comes out, the game will be that much better. But when the biggest complaint one can file is “I want more!” then the game is doing something right.