Bottom of the 9th Review: A Good Run Spoiled 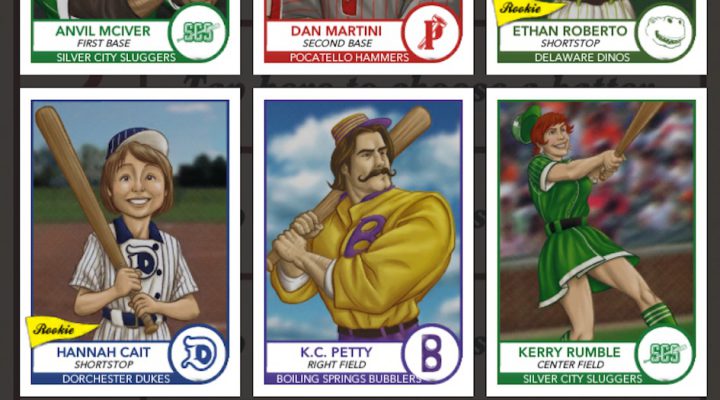 Does a good job of simplifying the rules via obvious buttons

Gameplay presentation is cute and smart

Menu presentation is quite rough

Bottom of the 9th is one of a handful of board games that have been given digital renditions that I had the chance to play in physical form first. The regular board game was neat but some of the rules were a bit too fiddly for me to get the hang of, so I usually ended up playing something else when given the option. But the baseball card presentation and fake stick of gum that acted as a tracker were really neat! Anyway, I was hoping that the digital port would be easier for me to sit back and enjoy without much hassle. Turns out it handles the rules stuff really well but introduces a whole new problem. 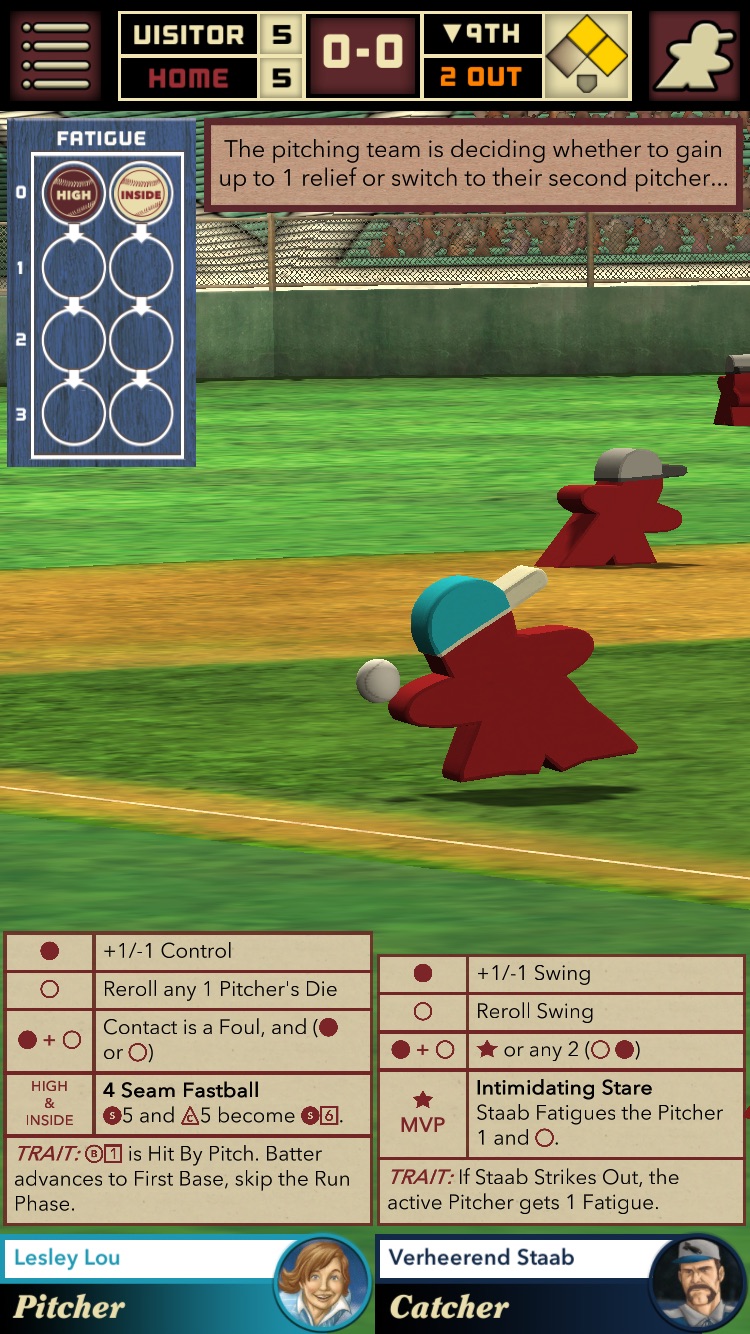 A game of Bottom of the 9th is a 1-on-1 affair, with one player at bat and the other pitching. Most of the play options involve direct competition over an internet connection, but you can play against an AI or a friend in the same room with the Home Game option — which is great because my natural inclination is to avoid online play with random people like the plague. Each turn is a straightforward matter of picking between High/Low and Inside/Away, with the pitcher deciding how to throw and the batter trying to guess, then each side rolling their own dice to determine the overall outcome. The pitching player wins if they strike out the batting player, and the batting player wins if they can score one run.

Between the constant need to monitor High/Low/Inside/Away tokens, pitcher fatigue, remembering player special abilities, and trying to keep track of how the rules for the different dice roles work, I couldn’t get a good handle on the physical game. Having all of that distilled down into automatic button prompts and little reminder tips at the top of the screen has been fantastic. Now it feels like I’m actually playing Bottom of the 9th instead of just reading and re-reading the rule book. Figuring out batter and pitcher abilities is still important, because it could help you figure out who you want to select for a game, but actually implementing those abilities is SO much less of a hassle now. 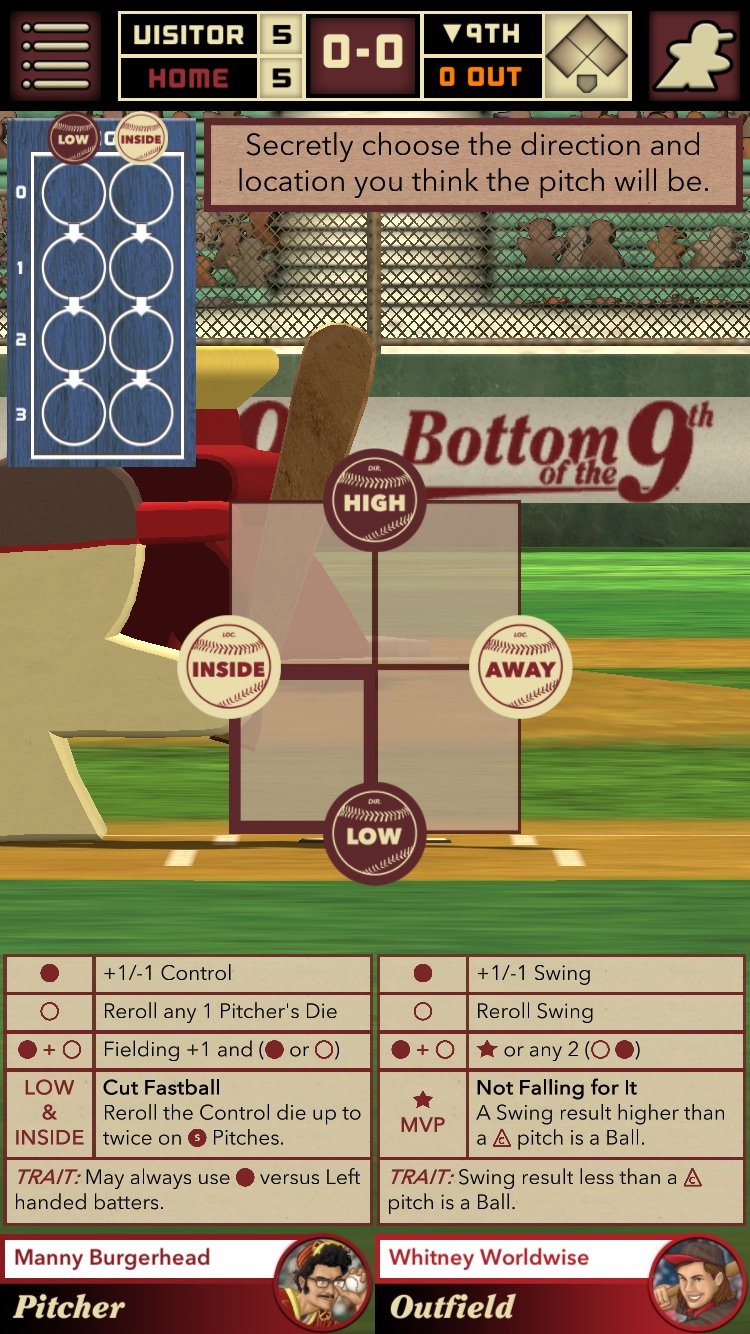 Of course I also love the way this version of the game is presented. I mean how could you not? The little animated baseball player meeples pitch, swing bats and shuffle along the bases in a cartoonishly awkward way that’s just freaking adorable. The game menus are super basic and contrast with the much nicer in-game interface, but you’ll be spending more time playing than navigating menus so it’s not that big a problem, really.

Unfortunately there IS actually a problem that I’d consider big: dice rolls. I know, I know, it’s super easy to blame losses on bad luck or bad dice, but I’ve played a fair number of board games (digital and otherwise) before and even my worst streaks haven’t been this bad. How bad, exactly? Well, first of all I’ve only managed to get a runner on a base via running (i.e. without getting four balls and walking) once in a non-tutorial game. I don’t mean once per game, either. I mean once overall. That’s absurd. Second of all, while attempting to bat in a recent game, I had a really bad initial roll, then got the exact same results again with two different re-rolls. That’s equally absurd. 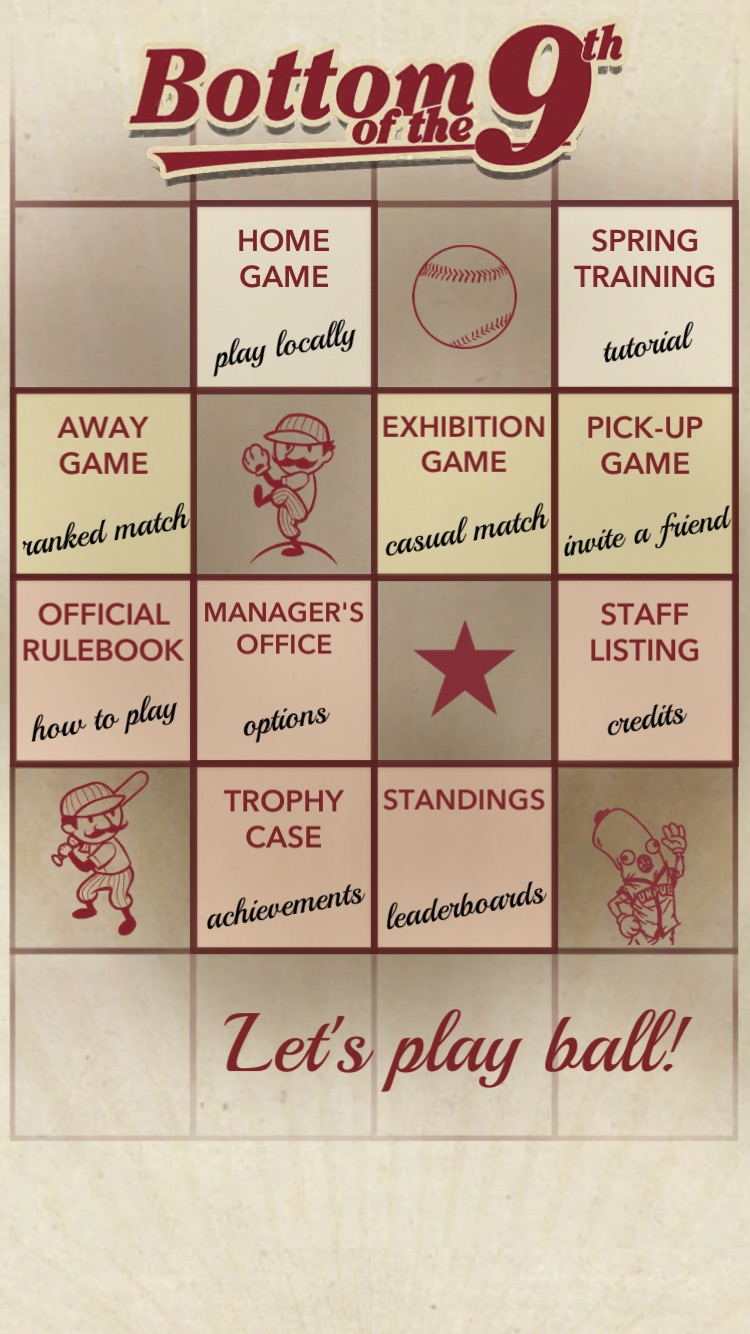 I hate how much it feels like the dice are intended to roll against me, because otherwise Bottom of the 9th is a solid example of digital board game conversion. I want to say it’s well worth checking out if your a fan of the regular game, or even if you’ve never played it before, but it feels too much like the random number generator that is the dice rolls just isn’t up to snuff. Even then I’d probably recommend it if the frustration of near constant (and seemingly purposeful) failures didn’t undercut most of the fun.