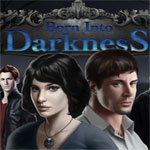 Not even zombies can come close to matching the widespread pop culture appeal of vampires these days. They’ve gone from being the filthy monsters of European folklore to the dark, powerful and sexy stars of their own novels (Anne Rice’s The Vampire Chronicles), movies (Dracula), and TV shows (Angel, True Blood). Born Into Darkness is a hidden object game that exploits the vamp theme too, but not in a particularly compelling way.

The story centers on the unlikely pairing of the human Nathaniel Black and the vampire Amber Blythe, who set out on a quest to retrieve the legendary Shroud of Lazarus. Their journey takes on a mildly Da Vinci Code-esque vibe that references a hodgepodge of histories and legends, from the Bible to Celtic mythology, the Knights Templar to Count Vlad Tepes of Transylvania. This might be well and good if the dialogue wasn’t as flat as a pancake. Ham-fisted voice-acting and goofy-looking character portraits also contribute to the disappointing lack of chemistry between the two main characters.

Gameplay is very similar to that of Autumn’s Treasures: The Jade Coin, a game by the same developer. It falls under the subset of hidden object games that has been recently coined "FOG" or fractured object game, where players must find all the pieces of an item before it can be put back into the scene where it belongs. (Flux Family Secrets and the Mortimer Beckett series also fall under the "FOG" banner.)

Once an item is placed back into the environment (such as setting a scroll onto a podium, or placing an amulet around a statue’s neck), new item silhouettes will appear to be found, and so on and so on until the area is cleared. Areas typically have a few different scenes to explore, and players can move freely between them to find the new item fragments that frequently appear.

If you’re stuck, you can click the item’s silhouette in the inventory to see pictures of what each piece looks like. If you need to go a step further, you can click on Amber or Nathaniel’s hint gems, then click on the item silhouette that you need help with, and one of the pieces will be revealed. You can also consult your journal, which offers a checklist of tasks that still need to be done. As if that weren’t enough, areas you need to investigate further will glow briefly with a white aura to draw your attention to them.

The catch with using hints is that certain items can only be found by Nathaniel’s hints, while Amber’s hints will only work on the other half. You can six hints per level (three each for Nathan and Amber), but you can earn more by playing mini-games. In Nathaniel’s mini-game you have to click on specific words in a jumble, and in Amber’s it’s matching ghosts with their portrait. Neither mini-game is particularly hard, nor are the puzzles that appear from time to time over the regular course of the game.

Puzzles can’t be skipped, so I suppose it’s a good thing that they’re easy. As well, it’s not always obvious where completed items are meant to be placed, so the fact that hotspots light up with a white silhouette at least saves the player some of frustration of random clicking. But doesn’t making a game too easy defeat the point a little?

The game does have some good music, and the graphics are nice enough, but we have to call the game out for recycling certain scenes wholesale from Autumn’s Treasures. (The museum at the beginning of Born to Darkness will look familiar to anyone who’s made it to Chapter 9 of Autumn’s Treasures, for example.)

It’s not that Born Into Darkness is particularly frustrating or broken, but there’s a tedious paint-by-numbers feel to the gameplay and production values that makes the overall experience disappointing.