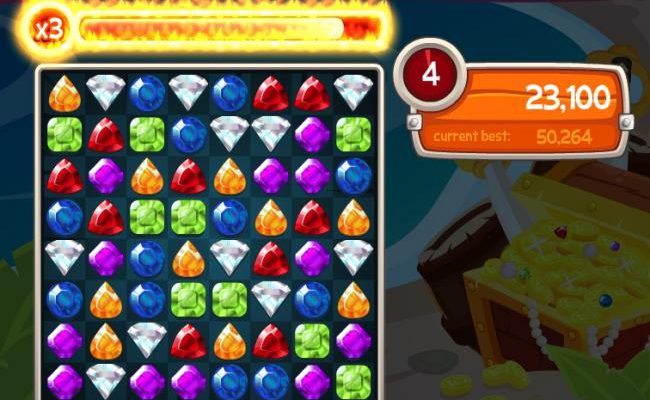 Booty Quest is Bejeweled with pirates

What is there that can be said about another Bejeweled Blitz-style match-3 game on Facebook? You know the drill by now. Booty Quest is a solid clone, to be sure, though the colored gems you’ll be matching while you’re playing make it clear just how much this game was inspired by Popcap’s puzzle hit. In fact, the only significant difference between Booty Quest and the multitude of match-3 games on Facebook is that you have 90 seconds to rack up a high score as opposed to 60. It feels more like an additional mode for Bejeweled than it does a new game experience.

As you might’ve guessed from the name, Booty Quest has a bit of a pirate theme going on. You’ll see treasure chests brimming with gold and deserted tropical islands in the background, and a helpful parrot will guide you through the experience should you need any help. However, once you actually start playing the puzzle portion of the game much of that buccaneer charm disappears. The shiny, colorful jewels that populate the game board look so similar to those in Bejeweled that you’d be forgiven if you forgot which game you were actually playing. 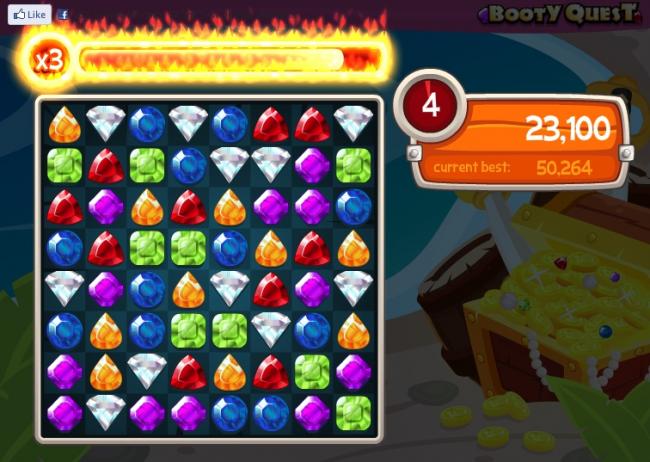 The match-3 play is relatively standard as well, aside from the slightly extended time limit. Matching up three jewels will clear them away, while matching four or more will create explosive pieces that can be used to rack up extra points. There aren’t purchasable power-ups in the game, instead you’re rewarded with explosions and other helpful features based on how well you manage to clear away jewels.

The always-present leaderboard lets you compare scores with any of your friends who might be playing, and there are a good amount of achievements to earn while playing. Meanwhile, your play sessions are limited by a heart meter. You start out with five and each time you play a round one will disappear. Once you run out you can’t play again until either you wait for the meter to refill or you purchase some additional hearts with premium currency. 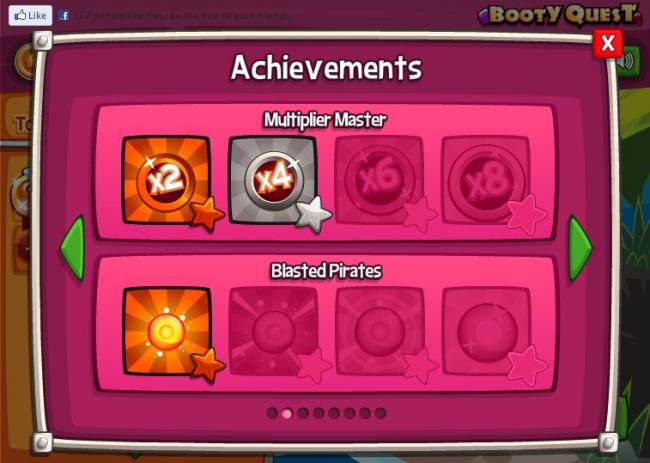 The major problem with Booty Quest isn’t its lack of polish or features, but rather the lack of any real reason to recommend playing it over something like Bejeweled Blitz. Unless you found the one minute time limit too restricting and feel like an extra 30 seconds will make all the difference, there’s aboslutely no reason to switch over to playing Booty Quest instead of any of the many, many “Blitz”-style match-3 puzzlers already on the social network.