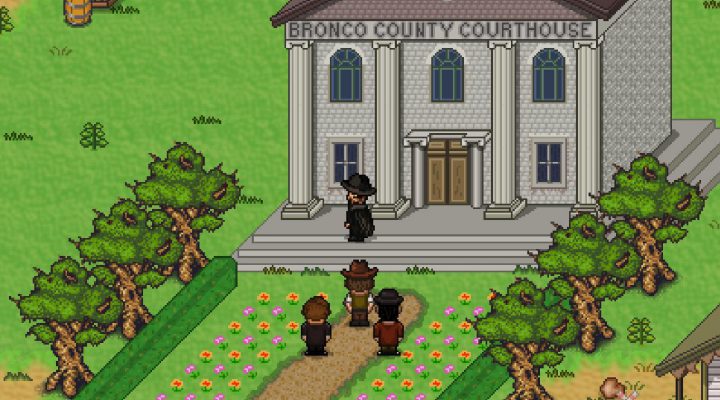 A brilliantly large and fleshed-out Wild West world that is a treat to explore.

Tons to see and do, with added incentives for exploring and speaking to everyone.

Dialogue with NPCs is hit-or-miss, bouncing between zany humor and dry morality.

No way to unequip inactive characters or see the names of weapon status effects.

The 2012 Kickstarter campaign for Boot Hill Heroes was packed with ambition: the game would be a classic Super Nintendo-style RPG, “one part Final Fantasy, one part EarthBound, and one part Chrono Trigger,” with modern innovations and four-player co-op, set in an expansive Wild West world. On top of all this, it would be spread across three distinct chapters that tell a cohesive story yet provide satisfying, standalone experiences. Part 1 more than fulfills these promises, paving the way for an epic trilogy that has already succeeded—and it’s only just begun.

This first chapter in the Boot Hill saga introduces us to the legend of Sheriff Templeton Howl and the notorious outlaw posse, the Saints-Little gang. Set “sometime in the nineteenth century,” Boot Hill Heroes takes place during a time of expansion and blurred boundaries, when the law was often one man with a badge and justice was a bullet. Templeton Howl sacrifices his life in a final showdown with Coyote Saint, leader of the Saints-Little gang, but manages to wound and send him to the impenetrable desert prison, Devil’s Hold. The gang is disbanded, and an uneasy peacetime begins. 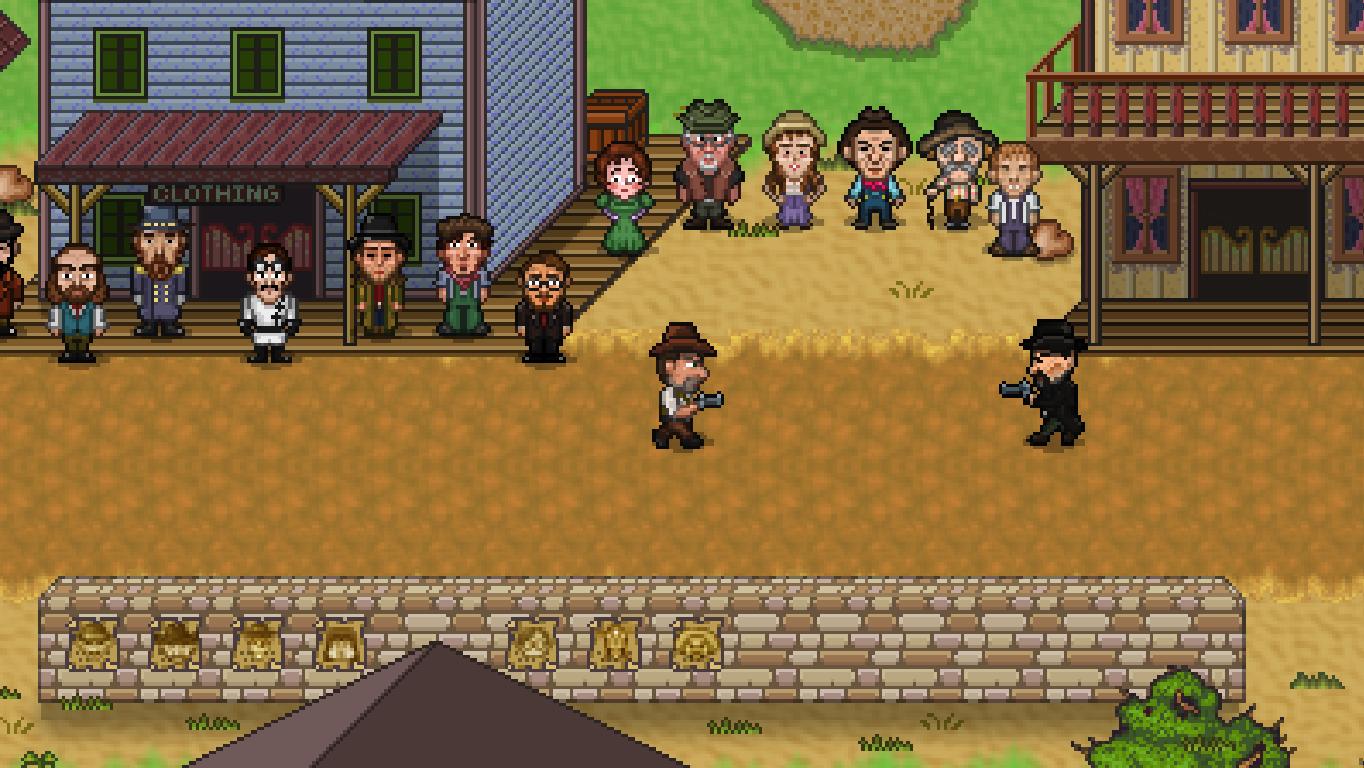 Part 1 begins a decade after these events, putting players in control of Howl’s only son, Kid. Kid is still a boy, living an uneventful life on his family’s farm. When the bills begin piling up and foreclosure is imminent, Kid’s mother reluctantly sends him to the big city—Swellsville—to find a job and save their home. Although Kid’s journey begins as a simple attempt to make ends meet, it quickly evolves into a much grander adventure involving swindling, circus sabotage, declarations of war, and of course, more than a brush with the Saints-Little crew.

True to its promises, Boot Hill Heroes presents this winding tale in classic JRPG fashion, utilizing turn-based battles and world exploration that will make any 16-bit gamer feel at home. Of all its notable inspirations, Boot Hill Heroes favors EarthBound the most. Outside of the obviously reminiscent oblique projection and colorful, pixelated graphical style, EarthBound is the template used for most gameplay features. Towns are the primary locations and where most events—even battles—take place. There is no overworld map, simply roads between towns. Enemies wander in plain sight, allowing you a chance to seek out or avoid fights. Although the “surprise attack” feature of EarthBound is abandoned here, the soft-soled Oxford shoe equipment allows you to skirt enemies with ease. Battles take place in the recognizable first-person viewpoint, and even the stats earned upon level-up are nineteenth century counterparts of their inspirations, such as “rugged” and “grit.”

The biggest changes between Experimental Gamer’s first title and the second Mother entry are within battles themselves. Fights feature a much more active system which utilizes a power bar instead of a speed/time counter. All actions characters can use—offensive “vantages” and defensive “stances”—require a specific amount of power points to complete. Players can select actions at any time and once they have enough power, the action will execute immediately.

To make things more interesting, actions can be canceled at any time without sacrificing power, and those points can be allotted towards a new action—for instance, if you are waiting to attack but an enemy is about to hit you, you can cancel and switch to a defensive stance. This makes for a surprisingly fast-paced and engaging battle system that is even more welcoming to multiple players. For single-players who find it a bit overwhelming, you can quick-pause freely and select your actions without being rushed. 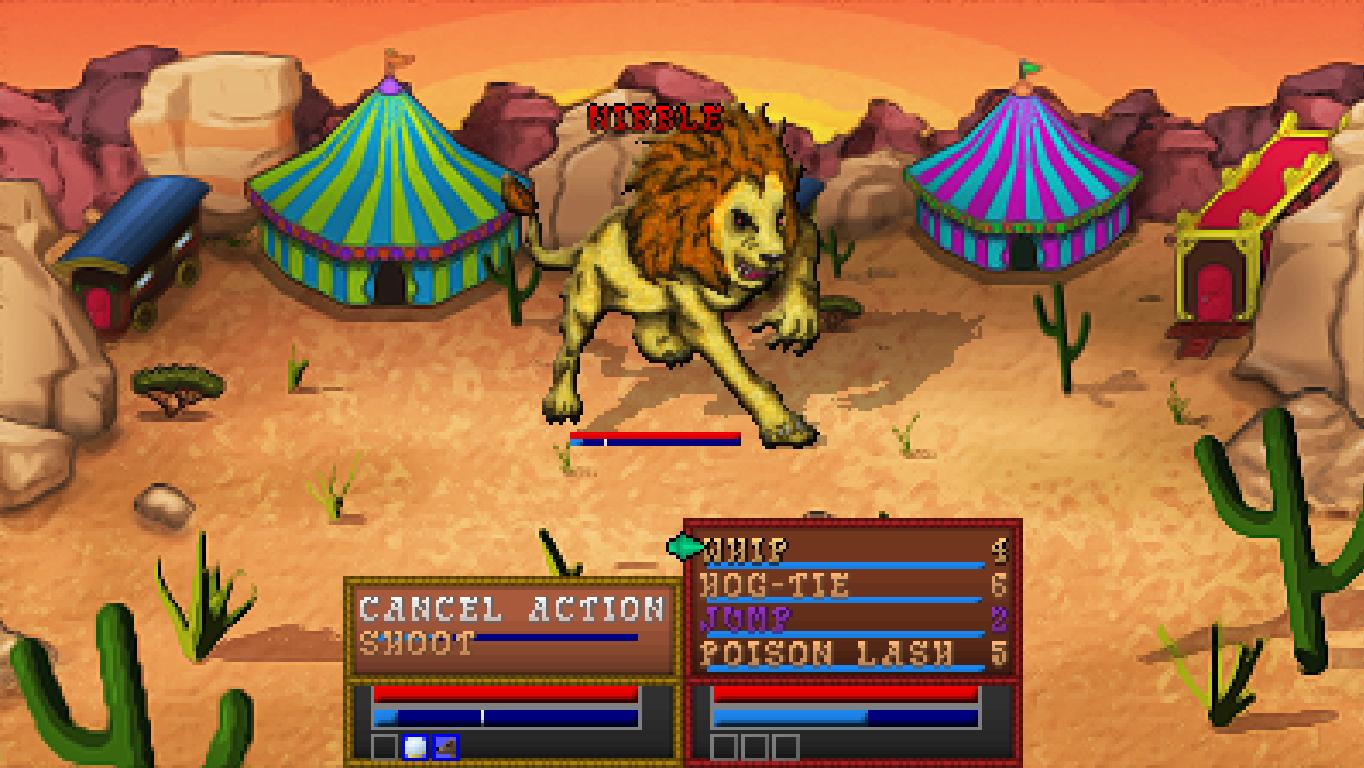 Another change is the vantages/stances system itself, which forces players to consider strategy both during and before entering a fight. Actions are learned by equipping different hats and earning vantage points in battle, à la the Esper system in Final Fantasy VI. However, only four actions can be equipped in battle, meaning you need to cleverly balance your characters’ abilities. There are also a wide range of abilities that weapons can be imbued with, from making enemies drop items more often to potentially setting them on fire. While this isn’t a new idea, it adds another layer of strategy to pre-planning for battle.

Although Boot Hill Heroes is as much an homage to EarthBound as it is an original game, it has opted for a more serious air than its predecessor. Side quests involve proving you respect nature and delivering horses, as opposed to beating up robots and hallucinating on magic cake. There are definitely moments of random zaniness—such as fighting a pack of raccoons for their garbage or meeting a mad haberdasher mayor—but the overall tone is notably less wacky. This is more a surprise than an actual detriment, although conversations with NPCs do occasionally fall flat. For every person who makes puns like “heart hattack,” there’s another expressing general malaise about conflict with the Chepakwik tribe. 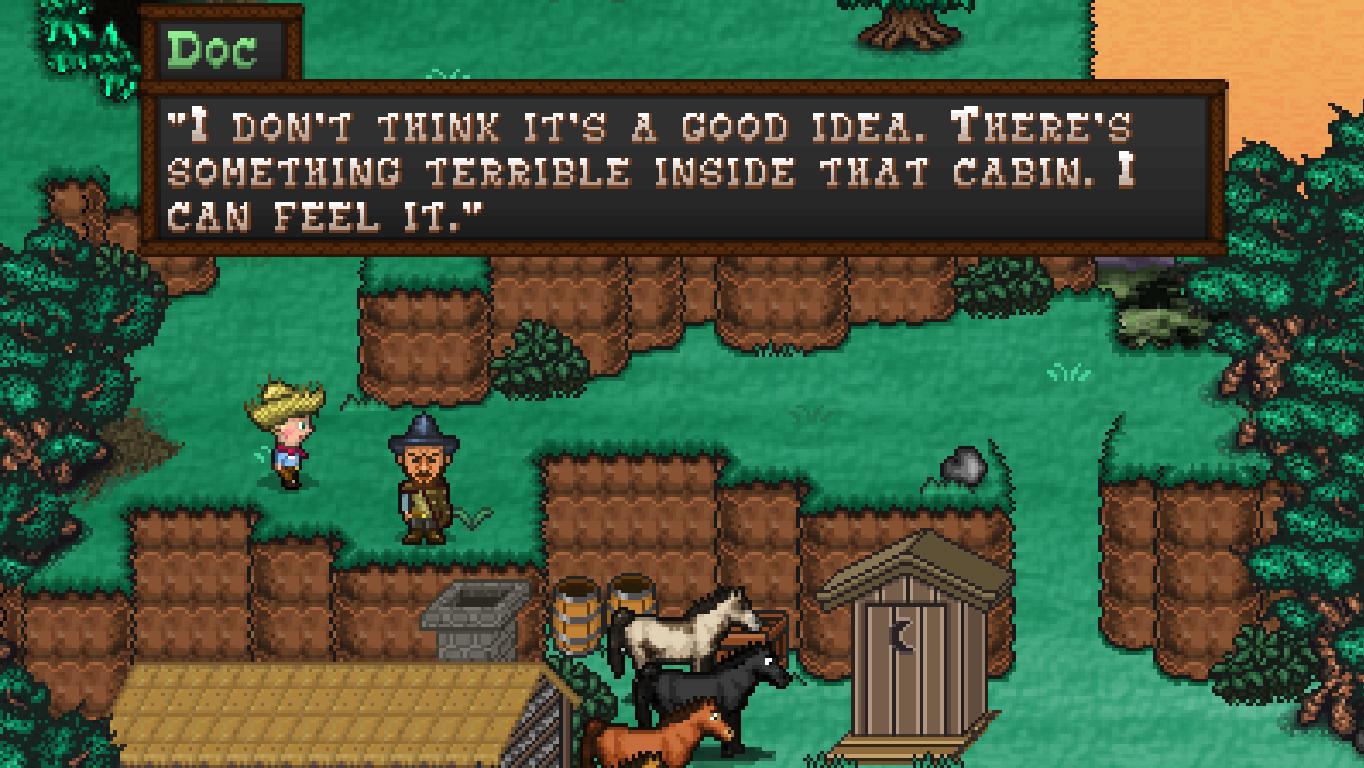 Luckily, one of my favorite features in Boot Hill Heroes makes up for some of the unavoidable tedium of talking to NPCs: many characters bestow positive status effects upon the party member that speaks to them. A friendly dog might provide “Kinship,” which boosts healing vantages, while a passionate speech about the dangers ahead may provide “Determined,” which makes stances last longer. Even wandering towns and dungeons has been made more rewarding thanks to random, respawning items (used for imbuing weapons) scattered about. There’s very little “down time” in Boot Hill Heroes; you’re always progressing in some fashion, even if you’re just collecting gossamer from sheep.

Part 1 of Boot Hill Heroes manages to balance nostalgia with originality, introducing some clever ideas that make the usual RPG drudgery more engaging and active. While it wears its iconic inspirations on its cowhide sleeve—including a villain that couldn’t be more Kefka-esque even if he was wearing clown paint—it never feels derivative. Its unique wild west setting is carried through from horse-bike to gangrene status effect, building a complete world within and beyond what we’ve experienced in these first twelve hours. What lies ahead for parts 2 and 3 is yet to be seen, but if Part 1 is any indication, we’ll want to ride this one into the sunset.