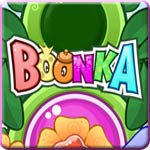 In this time of heightened environmental awareness, it’s surprising that more game companies aren’t looking at saving the earth as a central theme. Boonka, from Raptisoft and Sandlot Games, takes the idea of rebuilding forests and crafts a deep match-three game on top, with some surprising (and sometimes downright odd) results.

Aided by the Voice of the Land, a creature named Bababoonka – looking like a bizarre cross between a water-based alien and a Buddha statue – your job is to rebuild the clear-cut trees and save the land from the invading Skours, a race of black cloud-like beings. Using Bababoonka’s power to turn into smaller spiritual creatures called Boonkas, you’ll cause the trees to grow back, eventually taking the fight to the Skour stronghold.

The story is told through cutscenes before each level. While nothing spectacular, the audio and video is pleasant and definitely fits the themes and tone of the game. Everything is clean, clear and easy to see.

The main game, dubbed Adventure Mode, has you travel across the world map, saving a small group of trees as each of the game’s 60+ levels. Basically, as you chain and remove multiple Boonkas, a Grow meter fills on the side. Boonkas are added across the bottom, one row at a time. If they get too high in the well, the Skours win and you must try again. Once enough Boonkas have been removed, the word “Grow” lights up, and after one final removal, the tree is restored to its earlier majesty.

It’s a simple concept, but Boonka is anything but simple. It’s a wonderful creative break from tradition, albeit to the extreme.

First, let’s look at how the pieces are moved. Typical match-three games force you to swap pairs of icons to make matches (a la Bejeweled). Here, each Boonka is moved individually, and in any direction. Only horizontal matches can be made, though, and form a barrier preventing any Boonka from travelling through it. However, the chain can be as large as every like-icon on the board, because they are not automatically removed.

Special pixies appear on the board, and when two are linked, they take off like a rocket, lifting any chained Boonkas out of the playfield that they impact on the way up. Obviously, strategy becomes an integral part of the gameplay. It’s best to try to have a longer horizontal line of matches to remove as much as possible, but, again, it’s not that simple.

Boonka employs a complex bonus, item and strategy system with some very odd names. For example, if you link five Boonkas, the word Boonka pops up, giving you a bonus. If you can make a chain that spans the entire width of the playfield, you’ve just make a Krosh. Lift it, and you get a Crushka bonus (and if it’s especially large, you get a Super Crushka). Also, links can be formed in step-like shapes, called Linkas. There are special one-time bonuses, too; for exampple, if you make a lift and a cliff of five Boonkas or higher remains, you’ve got a Tower Maker, and are rewarded with an Icie, who, if you double-click him, freezes all surrounding Boonkas to help them lift off in one giant chunk.

While deep and complex, Boonka‘s reward system is very difficult to keep straight in your head. Very often, you’ll stumble upon a bonus you may not have been told about. For example, I somehow managed to link 50% of the Boonkas on the playfield. The game paused, announced I had done the feat and encouraged me to go for 75%. I never knew this was a goal, so of course it became a new part of my strategy. While the game offers up much of this information gradually during mini tutorial lessons before each level, it borders on “a little too much to remember."

After each level, you’re offered an extra challenge level. These are great brain scratchers, like lift two pixies but never make a link with a Boonka, or link every Boonka on a level before lifting. They are a devilishly good challenge, only marred by the fact that you can’t replay them once completed.

There are boss levels too: the Skour Towers. Here, the Skours themselves hinder lifts by reducing your score earned by the lift. However, the Boonkas are, to put it politely, miffed. They look cute to begin with, but here they’re downright mad, with angry animations that add a humorous charm to these extra-challenging levels.

Rounding out the package are two other modes. Blitz Mode challenges you to work as quickly as possible to clear the playfield of Boonkas. My favorite, though, is Beanstalk Mode, a relaxing infinite-play mode where the only goal is to keep growing for as long as possible. Neither mode feels tacked-on, and both are great practice for the Adventure Mode.

A word of advice: play this game with a proper mouse. I tried using my laptop’s trackpad, and moving Boonkas felt imprecise at best. It plays completely differently when you’re in control. (There’s no option to adjust movement sensitivity.)

While bordering on excessively-complicated, Boonka offers a fresh look at a packed genre. Don’t let the cutesy graphics fool you. This is a robust match-three that stacks up against any of them, and will hopefully Super Crushka its way into your casual game library.