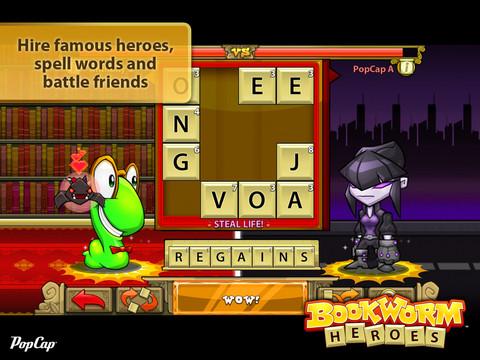 A worthwhile follow-up to Bookworm that suffers torn pages thanks to its free-to-play model.

The problem with the free-to-play (FTP) model is not that it exists. The problem is that some publishers who are in love with FTP implement the system in a manner that screws the player instead benefitting him or her. PopCap’s Bookworm Heroes is one example of a great game that’s dragged down by its FTP elements. It’s too bad we can’t just pay $1.99 and avoid stressing out over coins, pets, heroes, and the rest of it.

Bookworm Heroes is the follow-up to PopCap’s Bookworm, a word-building game that has remained enormously popular since its initial 2003 release. Like its predecessor, the main challenge in Bookworm Heroes is to assemble words using joined word tiles. This time, however, words can kill. Whenever you spell something out, your avatar launches an attack and deals damage according to your word score.

Bookworm Heroes’ stable of avatars gives the game an extra touch of fun. Each avatar has different abilities that can boost your letter tile scores, or sabotage your enemies’ tiles. For instance, Lex the bookworm has access to apple tiles that heal his health whenever they’re utilized in a word. Razor the cyborg can use “cybertiles,” which grant a big scoring boost to short words. And Hamlet can squirt ink on an opponent’s tile, rendering it unusable (also, he carries a skull that’s marked with a “Y,” and he looks appropriately sorry for himself).

Bookworm Heroes has cute visuals and a good sense of humor. It brings some intriguing changes to the classic Bookworm formula, and most importantly, it’s fun to play. Sadly, it runs into some major problems courtesy of its FTP structure. In order to start a game (either with a random opponent, or with a pal via Facebook), you need to hire your avatar, which costs coins. Thankfully, it doesn’t cost coins to take turns—but if you’re matched up against an opponent who takes forever to respond, or who flakes out on the game entirely, you’ll have wasted your money.

Worse, you earn coins at a glacial pace in Bookworm Heroes. You win a handful after each successful move, but it’s a worthless gesture considering it takes hundreds to start up a new game. If you want to play Bookworm Heroes at a brisk pace, you’re going to have to cough up some hard cash for coins.

There’s also the matter of pets. For additional coinage, you can hire a fuzzy critter at the start of each match that offers bonuses like tile-swapping and health restoration. While none of these bonuses seem especially game-breaking, is it really fair to have them around? FTP games are often criticized for letting players “pay to win,” and that criticism should apply two-fold to a game of wits.

Bookworm Heroes is a worthy extension of the Bookworm universe. It’s just a blasted shame that Popcap decided to make it free-to-play, since almost all of its failings can be traced back to the divisive gameplay model. Does Lex cry softly to himself when the game is turned off? He’s well within his rights to do so.