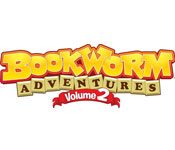 The simple written word can hold a surprising amount of power, but who would have thought stringing together chains of letters could harness enough mojo to best a mighty serpent beast or an undead kung-fu warrior? Casual gaming powerhouse PopCap Games brilliantly melded wordsmithery and light-hearted RPG combat in 2007’s Bookworm Adventures. With another round of literary combat freshly queued up, the second volume is every bit as quirky and obsession-forming as the original.

Once again starring Lex – a lovable, glasses-toting bookworm with an appetite for words – Bookworm Adventures Volume 2 features 30 new chapters set across three wildly different storybook worlds. When poor old Mother Goose jumps from the pages of her book with the Big Bad Wolf in hot pursuit, our geeky green hero must set aside his library pursuits and come squirming to the rescue. Lex’s latest adventure takes him on a bizarre journey through a hilariously scrambled-up fairy tale stew, up into the dangerous oriental mountains of kung-fu legends, down beneath the waves of the deep sea, and further beyond.

Each colorful and vividly-designed chapter progresses as a series of one-on-one battles against a medley of strange and comical creatures, in what can only be properly described as turn-based bouts of word-fu. These literary sparring matches require you to deliver various melee attacks against the enemy by forming words from letters contained in a 4×4 grid. Spelling out larger words makes your attacks more powerful and whittles your foe’s life meter away much more quickly. Working in specially-colored gem letters adds damaging elemental effects to your letter barrage.

Intellectually pummeling your way through a string of tough henchmen and tackling each chapter’s tougher boss battle yields special items that can be equipped for a big boost in battle. You’ll also gain experience along the way, which increases your health, defense, and attack levels over time. Believe us: you’ll need it later on.

Nearly every aspect of the gameplay is a seamless continuation of the intensely enjoyable word battling fun delivered in the first game. The basic hybrid of light RPG combat and word spelling mixes amazingly well, and minor twists are thrown in at regular intervals to keep the formula feeling fresh and punchy. For example, some enemies have a weakness for certain words that fall under specific themes, like the underwater Dragon Guards who don’t take kindly to hot words (F-I-R-E, B-U-R-N, E-M-B-E-R, etc.).

Other foes unleash special attacks of their own – like Demonic Roots that infects grid tiles and Ground Stomp that renders some tiles useless for a short time – that affect the letter grid in different ways and make your job tougher. Your opponents grow tougher as you level-up and progress through each chapter.

Beyond scores of new monsters and story twists, Bookworm Adventures Volume 2 also adds a handful of minor gameplay tweaks into the pot. One of the best additions comes in the form of a helping hand. Throughout your adventure, you’ll pick up literary companions (like the Mother Goose, Legendary Master, and Cheshire Cat) that offer up support by healing you, stunning enemies, removing negative status effects, and triggering other useful powers in combat. Only one companion can tag along at a time, but they’re a big help during some of the more difficult boss encounters. There’s definitely some strategy involved in choosing the most useful friend and complementing items to bring along on any given chapter.

In addition to companions, there are many cool artifacts to equip, and you’ll occasionally encounter colorful rainbow gems in battle that appear in some instances and acts as wildcard letters. These are particularly useful in spelling more complex, hard to form words.

The game’s reasonably lengthy story mode is still the main draw, but a number of clever wordplay mini-games are again woven into the adventure. Every so often a hut will pop-up on the map, giving you an opportunity to pick a mini-game to play for a chance to earn important healing potions, strength elixirs, colored gems, and other goodies. Offering a few pleasant variations on the main word combat gameplay, these timed mini-game excursions have hunting for words within words, spelling your best five words from a limited selection of letters, and speed spelling to race up a hill, among other activities. Infinite replay mode and a fast-paced arena battle mode offer added incentive to stick with the game, after you’ve tackled the main story.

Humor has always been a strong point for the Bookworm series, and Volume 2 doesn’t disappoint. From the zany enemies who spout funny phrases to the visual puns worked into the unusual settings and character designs, the game simply oozes silliness. A few minor changes aside, Bookworm Adventures Volume 2 is essentially another hearty helping of the same addictive wordplay offered up by its predecessor. But that’s not really much of a complaint when the original was so enjoyable in the first place.