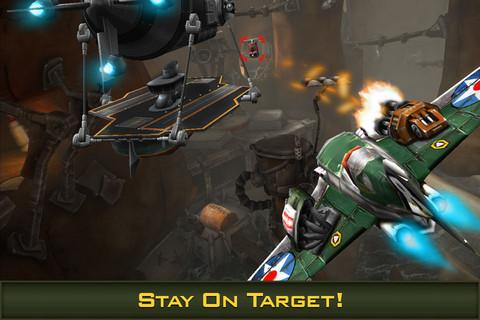 Top Gun, or Flop Gun? I’ll never do that again.

If you ever entered the universe of Glu Mobile’s Gun Bros., you’re no doubt familiar with over-the-top, insane action. For those not in the know, their world is inhabited by two big, bad brothers with barrels of bullets. This whole time, however, they’ve kept their feet on the ground; as it turns out, there’s plenty going on overhead as well.

Continuing the story established in Gun Bros is Bombshells: Hell’s Belles, a game that takes to the skies with a decidedly more feminine set of action heros. Do these bombarding beauties soar in the same world as their gun-toting brethren, or do they come spiraling back to earth?

Bombshells: Hell’s Belles puts players in the cockpit of some high powered planes; these sky dwellers are controlled using your device’s tilt controls with exceptional precision. Buttons on the side of the screen will account for the rest of your needs, from turbo bursts to breaks, as well as your mounted guns and missiles. They’re easily accessible and they never feel too out of reach, or like they will throw you off your path. Even better? Once you start firing on invasive aircrafts, you’ll automatically zoom in on the target, all while keeping your craft stable.

You’ll need as much fire power as you can get to take on some of the T.O.O.L.s you’ll be facing. No, seriously, that’s the name of your enemies, and they live up to their cliched acronym. They always come prepared with a toolbox full of options to throw at you. By in large, battles with the AI prove exciting and packed with ample difficulty and thrill; the game will certainly keep you fighting for supremacy.

Though unfortunately, it’s onl partially because of that solid gameplay that Bombshells: Hell’s Belles will keep you fighting. The title comes packed with Skybucks and Xplodium, multiple types of necessary currency. Xplodium is earned in game, so if you’re hoping to make the most use of that, get accustomed to seeing a lot of those T.O.O.L. combatants. You see, there’s a fair amount of grinding needed to stack up in-game dollars, assuming you don’t want to fork over the real life kind of cash to get Skybucks. In-app purchases “aren’t a requirement,” as long as you’re alright with playing the same missions multiple…multiple times, with varying levels of monotony. However you decide to get cash in the Bombshells: Hell’s Belles universe, though, you’ll definitely want some. Upgrades will be key to keeping yourself in the air while taking on incoming enemies. 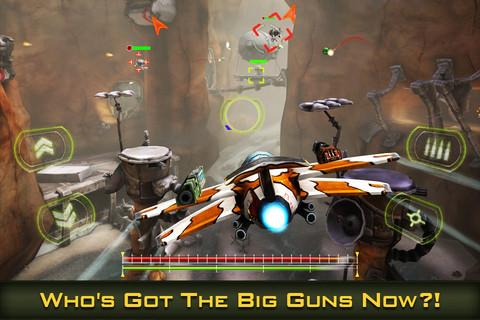 Grinding is an artificial way to encourage extra playtime, so the addition of a multiplayer element is a much better means of extending time in the world of these bombshells. Yet while the promise here is great–tallying some frequent flyer with friends is purportedly available–it’s not a feature that’s currently up and running with any reliability. As time goes on, I can see multiplayer mixing up play enough to really get this game’s engine roaring. As it stands, though, rock solid controls feel wrapped around a package that dips due to grind-heavy gameplay and an overall lack of variety. If you’ve had better luck connecting, feel free to let us know, but repeated attempts yielded mid-game disconnects, slow load times, and more.

I wish I could say that Bombshells: Hell’s Belles soared to – and past – its potential. The game has more than serviceable graphics, really tight controls,  and some high-flying action that is really tough to match. Unfortunately, the action isn’t different enough when weighed against the fact that you have to keep playing the same levels over and over to get your upgrades. Upgrades which often feel shoehorned into being necessary in a way that makes you choose between being a payer, and a player. The cardinal sin of games with in-app purchases. It’d be better to take to the skies with other pilots, but even that workaround wasn’t available, with the multiplayer just not up to snuff. For less discerning arcade fans on a search for some well-designed bursts of action, definitely consider giving this a look. Be warned though, what’s billed as an arial bombshell ends up just sort of…sputtering along.