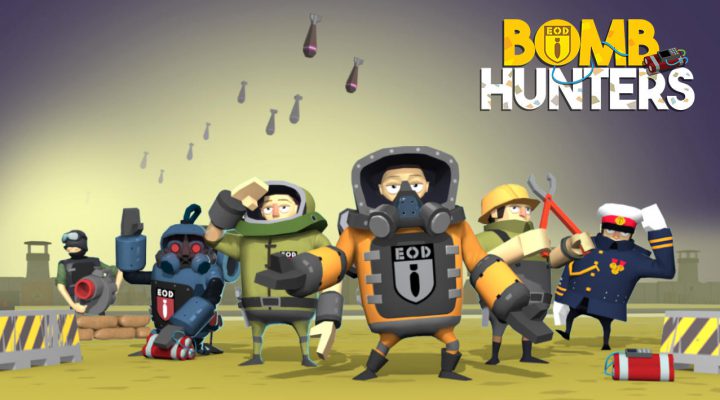 Great twist on the runner format that offers immediate and interesting goals through tracking down bombs.

Upgrade system and different suits provide an RPG aspect, with enhancements to work towards and almost guaranteed ways to earn higher scores.

The white mini-game bombs offer a change of pace and fun micro-challenge diversions.

Extremely friendly economy with no need to watch ads or buy anything unless you simply want to.

Gameplay inevitably does become repetitive, even with the procedurally generated levels.

Not enough variety in enemies or level themes and layouts.

Bomb Hunters is the latest release from Craneballs, a developer that’s a bit of a genre wildcard on the App Store. Their catalogue ranges from the vehicular paintballer Splash Cars to the gritty FPS Overkill series to the adorable 3D snake crawler Cube Worm. Bomb Hunters puts another gameplay notch on their ever-growing belt, combining elements of Crossy Road, maze puzzles, and RPG upgrades in a mixture that works extremely well. It plays like a high score runner, but the shorter-term objective of finding bombs provides focus and goals that are immediately rewarding, while the upgrade system offers tangible, permanent in-game incentives and enhancements.

Bomb Hunters puts you in the thickly shielded shoes of an EOD specialist tasked with hunting down and disposing of bombs scattered around a military base. While bombs come with blue map markers that point their direction, the base itself is a windy, procedurally generated assortment of walls, crates, and other debris that must be navigated in order to actually reach the bombs. The base is also divided into self-contained segments between gated headquarters: bombs only activate within the segment you’re currently traversing, and the gate to the next section won’t open until you’ve deactivated all of the current area’s bombs. 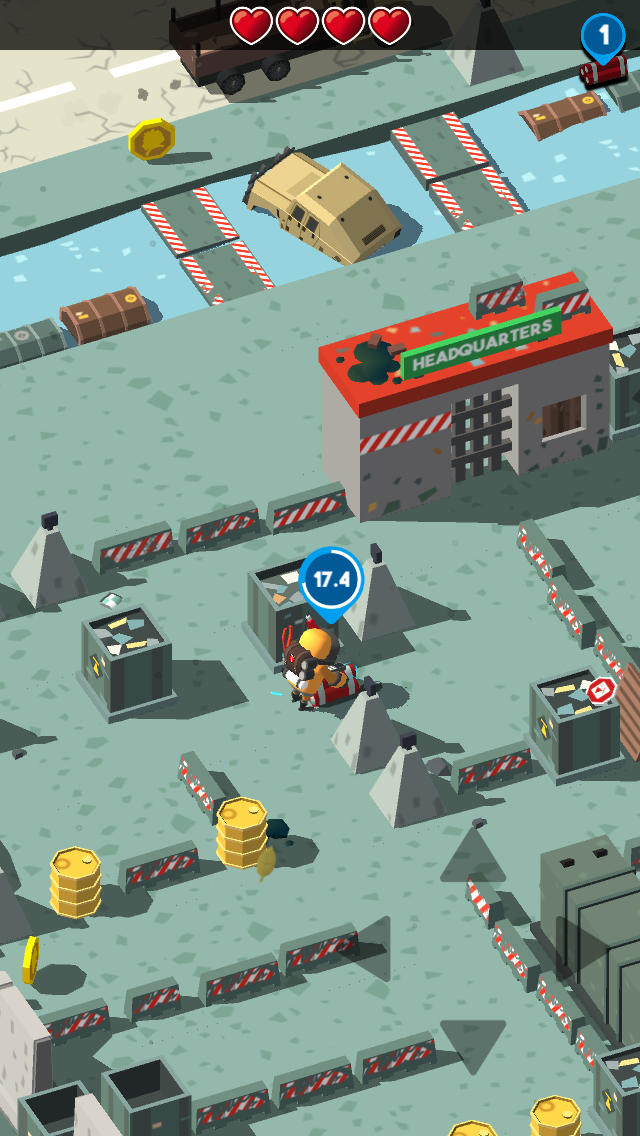 Within each area between headquarters you’re free to move in any direction in your search, and you’ll frequently have to backtrack or go around obstacles to reach bombs hidden behind walls, between rivers, or in other out-of-the-way locations. Each bomb’s map marker contains a seconds timer that is constantly counting down—bombs nearer the starting point have less time while those farther away have more—and if you don’t get to and diffuse a bomb before its timer reaches zero, it will explode and end the run.

There’s usually enough time on each countdown to simply make it to a bomb, but other dangers dot the map and must be circumnavigated. Snipers and grenadiers perch in nests and can shoot you in a straight line from across screen or on any of the tiles surrounding them, respectively. Air raids pass overhead and paint a swatch of the ground with X-marked explosions. Roads contain a flurry of vehicles that must be dodged and rivers are often only passable via quickly moving barrels. And the farther you get on each run, the more bombs appear in each segment—while the first area may only contain one, you’ll soon be tracking down six or more in a single section, each bomb counting down as you race between them.

There are blue clock tokens scattered around the level which, when picked up, will add extra time to every remaining bomb’s countdown timer, giving you a bit longer to reach distant explosives. But the primary way of making progress and getting higher scores comes from the new suits you can purchase and the permanent upgrades you unlock upon ranking up. Suits provide additional hearts for your bomb specialist, allowing him to take more damage—from things like snipers, cars, or grenades—before the run ends. Although he’ll begin the game with only a single heart, every suit increases his HP by one, with the highest-level suit currently providing a whopping ten hearts.

Ranking up is done by diffusing bombs: each rank has a required number of disposals before you reach the next level. Upon leveling up, you get to select a random bonus that will be applied to your game from that point forward. These bonuses range from slowing down passing cars to increasing the percentage chance that a bomb will be a dud upon detonating (if you don’t neutralize it in time). Any bonuses you don’t pick for that rank are added to a loot box which opens up every 24 hours, providing another permanent upgrade. You can also spend the premium currency, dollars, to snag more upgrades in a single sitting. 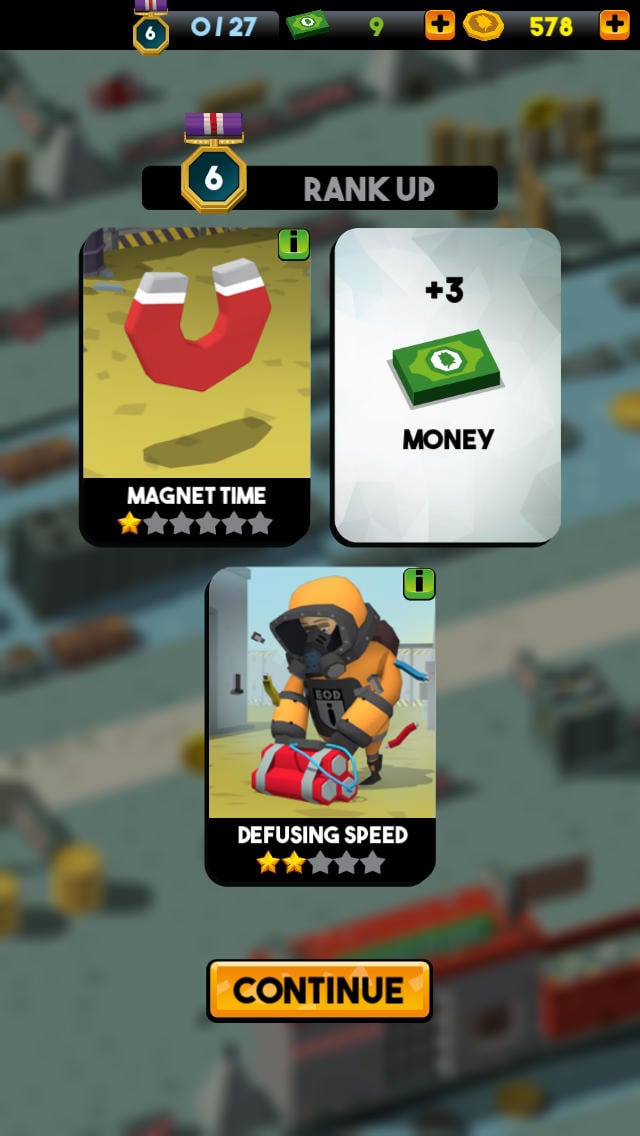 These upgrades make it much easier to survive longer each run and diffuse more bombs, thus earning higher scores. But since the areas increase in size and enemies in number with every batch of bombs you find on a run, there is still plenty of challenge at higher ranks. Bomb Hunters’ greatest hurdle then is the same of most endless games: it eventually becomes very repetitive. There are some elements included to help prevent this, such as special white bombs that require completing a random mini-game to diffuse them—these games have disposal-appropriate challenges, such as untangling wires or plugging in fuses—that do a great job of mixing things up.

But the majority of runs still end up feeling very much the same, especially since there are only three real active threats—the snipers, grenadiers, and air raids—and dealing with them primarily requires simply sidestepping their area of effect. There are four different maps to unlock by picking up letter tokens on levels, but these are basically just palette swaps with the same objects and enemies in different colors. One map has radioactive waste in barrels, but it’s merely decorative; another is supposed to represent Area 51, yet there are no aliens to contend with. Not using the different themes to introduce new threats or obstacles seems like a missed opportunity to inject more variety into what is naturally a very similar experience each time. 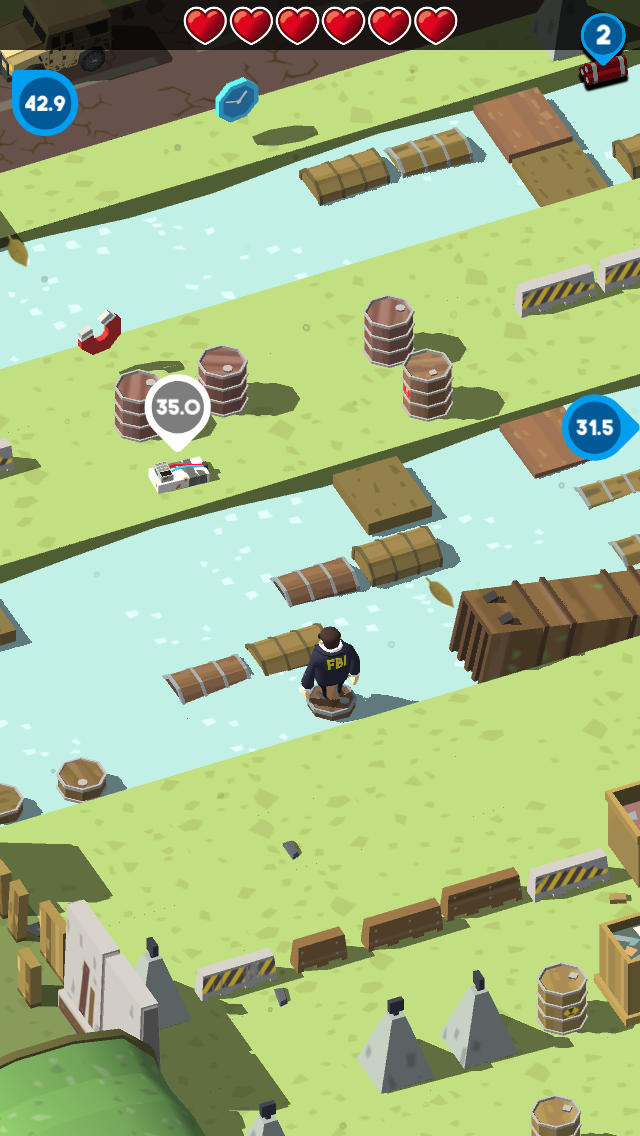 That experience is extremely engaging initially: we’ve been playing all week and have reached rank 14 while still enjoying our time with Bomb Hunters, but the repetition is starting to wear thin. If Craneballs maintains Bomb Hunters the way Hipster Whale has Crossy Road and continues to update with more varied maps, obstacles, and gameplay challenges, this could easily remain one of our favorite go-to mobile games.

They’ve already incorporated a massive amount of player considerations at launch, including alternate control schemes—we recommend switching to “swipe” right away—cloud saves, portrait and landscape orientations, skippable quests, generously rewarded premium currency, and a ridiculously non-invasive economy that has entirely optional ads and IAPs we’ve never felt pressured into using. There’s also a ton of polish and attention to little details that would have been easy to overlook, like the generous period of invincibility after losing a heart or the fact that you don’t take damage while entering a white bomb mini-game. All of these inclusions, added to the already extremely fun gameplay of racing the clock while tracking down bombs, make Bomb Hunters an easy recommendation for fans of runners, puzzle games, and literally explosive high score chasers.

Invert Review: A Zen Puzzler With Lots of Twists