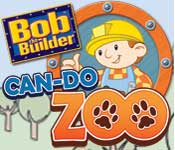 Bob the Builder represents one of the more educational and constructive properties in modern kiddy pop culture. Not only are his books and television shows instructive, they also contain important themes such as conservationism and gender equality. Hence, the reason why I was willing to let my three-year-old daughter have at Bob’s latest interactive adventure: Bob the Builder: Can Do Zoo, from Brighter Minds and Diner Dash and Jojo’s Fashion Show creator Gamelab.

The premise is simple: Bob has received a load of animals with a note telling him to take good care of them. Problem is, there’s no zoo in the town. Elephants are lounging in the opera house, alligators are infesting neighbourhood pools, and monkeys are swinging around the playground. Bob needs to get to work with his friends Scoop, Rolly, and Muck and build some suitable habitats for the visiting creatures.

Of course, this being a game for kids, young players don’t actually build habitats so much as engage in simple activities peripheral to their construction. There are seven challenges in the game, and aside from one in which children need to organize a set of five blueprint images that display the order of steps involved in constructing a cage, players don’t directly work on the assembly of anything. Rather, they match shapes and colours, try to recognize patterns, and find hidden objects.

One activity sees players cleaning up a mess created by Spud the scarecrow. Tools are littering the ground, and players have to pick up wrenches, levels, and pliers and then put them back in the appropriate toolboxes, paying special attention to the colors of their handles. A similar game involves sweeping away leaves to find specific tools buried beneath.

The pattern recognition games are slightly more challenging. One task has kids examine a series of boards in a fence painted multiple colors, then finish painting the last few planks in the group with an aim to match the established pattern. Another game requires players to scrutinize a series of objects sitting on the trailers of a truck and then load the final trailer with an object that corresponds with the pattern.

Can-Do Zoo‘s catalogue of mini-games is rounded out by a pair of color and shape matching activities. The first tasks kids to deliver animals with colour and shape coded cages to homes adorned with matching symbols, while the second involves following verbal instructions provided by the game’s narrator to select signs of varying shapes and colors.

On the subject of the narrator, he does a good job of providing simple, accessible directions easily understandable by children with limited vocabularies. My daughter was almost always able to figure out what was required of her with no assistance from me, and if she missed an instruction she just had to click a question mark icon at the bottom of the screen to have the activity’s directions repeated.

However, I do question the recommended age range of three to six years. My girl’s at the bottom end of that scale, and she breezed through the game when it was set to easy difficulty. Medium proved only moderately more challenging. Hard mode stalled her a few times, thanks to slightly more complex patterns and a greater pool of objects and tools from which to sort through in the matching games, but, given time, she managed to finish it as well.

Like any dad, I like to think that my little girl is a genius. But I’m realistic; I don’t believe she’s as advanced as a first grader. I suspect six-year-olds will grow bored with Bob the Builder: Can-Do Zoo in short order.

Still, as a pre-school game it succeeds quite nicely. It’s short — expect your children to fly through the story mode in about 15 minutes — but if my daughter is representative of other children her age, then they won’t mind playing again. And again. And again. Variety might be the spice of life, but, when it comes to young kids, repetition represents the meat and potatoes.

And when they do tire of the story mode, there’s some fun to be had in a bonus sticker game, which lets kids take the dozens of virtual stickers they’ve earned in the main game — tools, animals, fences, and houses — and create their own pictures by pasting them on a variety of scenic canvases.

Simply put, kids aged 2 to 4 years will have a blast — all the more so if they happen to be acolytes of the one Bob.