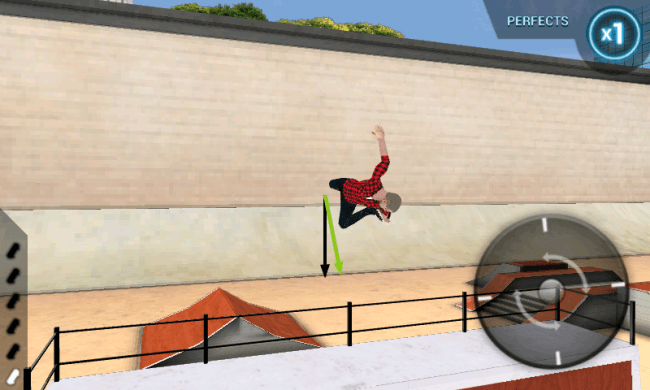 Those cubes ain’t gonna gleam themselves.

Boardtastic Skateboarding 2 is one of the best skateboarding experiences currently on Android, and it’s far less damaging than sticking trucks, wheels and grip-tape to your tablet.

The game begins with a home screen that gives the player a chance to check for news on the game, compete in multiplayer modes (once you download a free update billed as a sequel), enter the options sub-menu, check up on the multiplayer rankings, earn more gold (one of the two in-game currencies) or skate.  Pressing the “skate” button brings us to the true meat of the game. Here, we’re greeted by our trainer (a wise-cracking ex-pro who kind of resembles Will.i.am if he was drawn by the illustrators of the Grand Theft Auto series) who guides us through our first few tricks and shows us the subtleties of the RPG-like upgrade system that allows us to improve the stats, equipment, and clothing style of our character as in-game cash is earned.

With that out of the way, we can finally bust some sick diamondz on the half-pipe.  Boardtastic boasts five different modes of play – Freestyle (no rules here), Ladder (climb it by scoring high enough on particular tricks) Exhibition (go for perfect four-point landings) Daily (where a sequence of tricks for you to perform is updated on a 24 hour basis) and Tournament (where you have to perform a number of tricks exactly as listed to proceed) – but the core gameplay remains the same throughout.

After your skater drops in, you have a scant few seconds to input a move before he reaches the opposite lip. This is done by sliding your finger across the touch screen in a certain direction. A slide up initiates a nosegrab. A downward slide gives us a tailgrab. A slide to the left or right performs a method or an indy, respectively. As your character rockets in the air on the other side, you rotate your finger on a wheel until the arrow under your skater turns green upon your touchdown, and the process repeats until your run is over. Stick your landings to earn bonuses. Flail like a fish and your character takes damage. And as you compete, you’re given the opportunity to learn new tricks or upgrade old ones via trainer Tony’s talking head. All in all it’s a pretty sweet interface.

Boardtastic also boasts a multiplayer mode (available through a separate download) that allows you to pick an opponent from a league and try to beat him point-for-point in order to work your way up that particular league’s ladder.

The customization features give us the opportunity to purchase new decks, new parts to improve our boards, new clothing and apparel (important for the “style” bonus), and as previously mentioned, new tricks. There’s a lot to choose from in here, and PerBlue, the developers of the game, seem to be on point when it comes to timely updates. 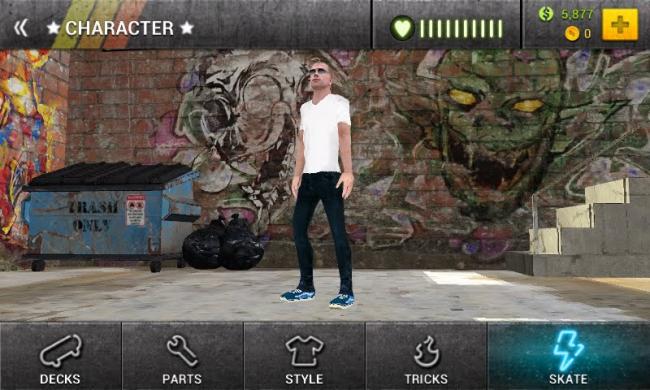 Boardtastic is one of the best-looking skateboarding games on Android. The player character model is well detailed, and his appearance is updated as you purchase new gear. The environments look great as well. They’re brimming with touches like graffiti and grime that add authenticity to the game.

The sound design is aces here. There’s a good variety of tunes that reflect the musical hodgepodge of skateboard culture, and the sound effects are solid. And if you’re not impressed you can always thrash to your favorite play list.

There are a few annoyances, though, that stem from the use of the secondary in-game currency – gold. You can grind (in the RPG sense) for cash, and most of the items in the game can be purchased through the winnings you receive as you play, but once you run out of the scarce supply of gold that you’re granted in the beginning of the game, you only have a few options: You can purchase more gold with real-world money, or earn it by downloading approved apps or completing deals like subscribing to the Disney Movie Club. Schemes like that cast a murky shadow on an otherwise solid game. There are also situations where you must wait a specified amount of real world time to activate an upgrade or wait for your character to heal (since you take damage whenever you screw-up a landing, and a character with zero hit-points can’t compete) unless, of course, you use your precious gold supply. Natch. The game could benefit from a bit of sponsorship as well. 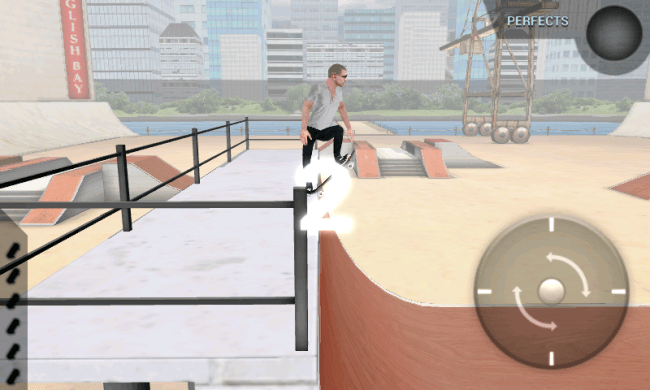 That said, the gameplay mechanics are solid and the overall package is pretty engaging. If you can get over the monetization issues, downloading this one is a no-brainer. If it all sounds a bit too corporate for your liking, stick to popping kickflips on your finger board.