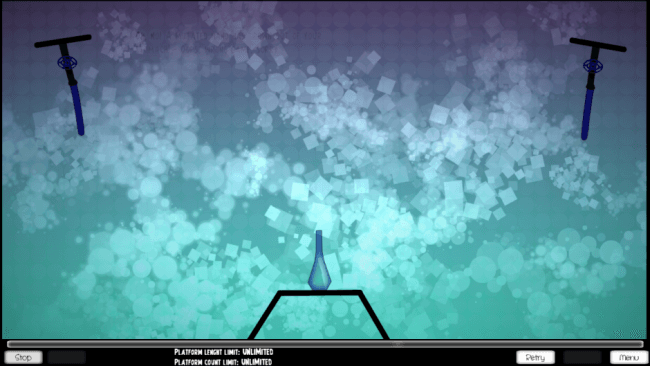 Bloop needs to take a good, hard look at itself

Sometimes a series of smaller niggles – niggles that on their own wouldn’t be too great of a threat – can build up to the extent that they completely overshadow any of the good that a video game has to offer. A lot of the time it’s silly little things that are easily solvable, but were simply overlooked.

Liquid-coaxing puzzle game Bloop has this amateurish feel throughout play, that suggests the developer wasn’t able to see past the concept and catch a glimpse of the hoards of issues that manifest themselves. From collision detection to a broken save system, to irritating pop-up messages that grind the action to a halt, it’s fair to say that I didn’t exactly have a whale of a time with Bloop.

Across 42 levels, your job is to create platforms for liquid to run along. It’s all very simple to play around with – clicking and hold provides platforms, while hitting Start will cause the liquid to get cracking. You want to get as much of the goo as possible into the provided containers, and if you manage to get all of it in, a fanfare is yours.

The underlying concept is decent. Apart from simply creating platforms, you can also manipulate the goo in other ways, such as holding right click to pull it towards you. As you progress, the levels become more difficult with swings that knock platforms down, elevators that move when they come into contact with goo, and more fiendish obstacles.

But there are so many problems with the game, it’s impossible to come close to enjoying yourself. The presentation itself is pedestrian at best, but it goes deeper than just feeling cheap.

The way the game teaches you how to play, for example, is awful with pop-up boxes that type out text rather slowly. The story, while potentially wacky and likeable, is impeded by awful cutscenes that you’ll want to skip as soon as possible.

The gameplay itself isn’t much cop either, thanks to problems with the collision detection, and sloppy awkward physics. Numerous times I left a gap between two platforms for the goo to fall through, only to find that the game wouldn’t allow the liquid to pass through. Right clicking to attract the goo isn’t much fun either, as a lot of the time it seems to have a mind of its own, and gallivants wherever it feels.

If you hit a particularly annoying level, you can’t skip it – you’re only ever given one new level to attack at a time, so most likely you won’t see the game all the way through. Most games of this variety will perhaps give you a few levels to tackle at a time, but not Bloop.

Then there are technical issues. The game crashed multiple times for me, while the game’s level editor refused to load half of the time. And the real killer is that, for some unknown reason, the game would not remember where I was up to, and each time I booted it up, would reset me back to the first puzzle all over again. 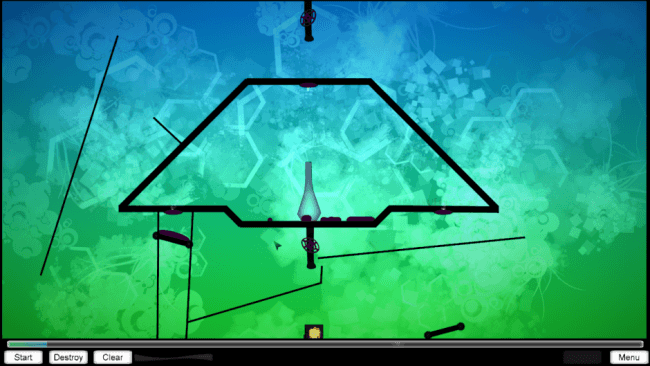 On the topic of the editor, it’s a confusing mess that will no doubt hook no one. When you’re providing a level editor with an indie title, you need to make sure it is accessible from the get-go, so as to reel people in. Bloop‘s level editor does quite the opposite.

The bottom line is that Bloop is simply no fun at all, and I couldn’t wait to stop playing. If that isn’t damning enough for you, you might want to grab the demo and see for yourself.